Hey pallies, likes just stumbled 'cross this cool article, "Children Of Paradise" from the March 2009 issue of Vanity Fair. Written by "Fair's" national editor Todd S. Purdum, the article is packed with groovy info on many children of the stars as they grew up in the land of Hollywood. I have excerpted below the stories shared by our Dino's girl pallie Gail Martin....givin' us more clues what it was like to be part of family Martin and call Dino daddy-o. If you wanna read this great work of prose in total, just clicks on the tagg of this Dinopost. Oh, how I loves learnin' more and more 'bout our great man and the life he lived with his fam. Dinodiggin', DMP 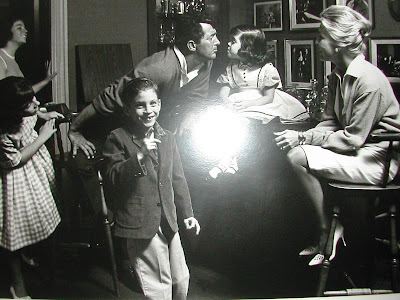 But Gail Martin, Dean’s second-oldest daughter, and one of his seven biological children from two marriages, didn’t get a car at all—at least not at first—precisely because she was one of so many.

“I said, ‘Look, Dad, every single person in my class is getting a car when they turn 16, every one of them,”’ Martin—now Gail Martin Downey—recalls. “He says, ‘Well, then, you shouldn’t have any trouble getting a ride to school!’ He said, ‘I have seven! They only have, like, two each!’ So it was funny.” Still, there were other advantages. “Dad would say, ‘Look, if you get caught driving, I can do any ticket. Just don’t go west of Whittier, south of Wilshire, north of Mulholland, or east of Doheny Drive. Then I can fix your ticket. Otherwise, watch your driving!”’

Gail Martin Downey, 63, whose best friend was Liza Minnelli, told me, “Somebody asked me a long time ago, ‘So what’s it like to be Dean Martin’s daughter?’ You want to say, finally, ‘Compared to what?’ I always was, you know? And people would say to me, ‘So, you go out to dinner?’ And I said, ‘Oh, we went out to dinner.’ ‘How was the service?’ I said, ‘I don’t know. I was with Dad.’”

Most Saturday nights, Dean Martin and his second wife, Jeannie (who helped raise his children from his first marriage, and three more of theirs together), had a party in their big house on Mountain Drive just above Sunset—often the setting for an argument between Tony Curtis and Janet Leigh. “Dad said, ‘Oh, swell! The Saturday-night fights,”’ recalls Gail Martin Downey, who abandoned her own singing career to raise a family and now lives quietly in Rancho Mirage, California, and who would babysit for little Jamie Lee Curtis.

Weeknights involved a stricter regimen. In exchange for letting Dean play golf more or less whenever he wanted, Jeannie insisted only that he be home for dinner with the kids each night by six sharp. One night, while filming a movie with Sinatra, he brought Frank home for dinner right on time, only to find his seven little Martins, the prodigious issue of his loins, each with a guest, filling all the chairs. “And,” recalls George Schlatter, a family friend (and the creator of Rowan & Martin’s Laugh-In), “Dean said to Frank, ‘How about that? I fucked myself out of a seat at the dining-room table!’”
Posted by dino martin peters at 7:41 AM

Hey pallie DMP. Thanks for posting that. That was so cool to hear some tales of what it was like growing up with Dino as daddy-o. I loved the story about how he invited Frank over to dinner and all the kids had guests over. Dino cracks me up. Cheers!

Hey pallie Keith, dude likes you I just can't get enough of true Dinostories of havin' our Dino as daddy-o...can't tell you how many times I have thought of that Dinodinner Dinotale since I Dinogrammed it yesterday...loves what our Dino sez to the frankie...

Hi Gail,
I recall in 1964 when you with your little sister Gina, came at the "Vogue Theatre" to pick up a print of the movie "Kiss Me Stupid" Shortly, I brought on Mountain Drive a print of my own documentay about Athens, Greece. Meeting your Father at the lobby I was anxious to tell him of the enormous success "Memories are made of this" had in Athens, but in front of his colossal presence I lost my words, and it made me stutter, so your Papa helped me out by saying "Oh, you must be the truck driver" I said as fast as I could "Yes Sir" and I disappeared. And yes "Kiss me Stupid" has become a Classic nowadays since then. From the Vogue Theatre I was transfered at the Hollywood Theatre as a night mgr., where we played the movie "The Sons of Katie Elder" Those were the days.
Best regards,
sotos

Hey pallie, Mr. Kappas, likes thanks ever so much for sharin' your first person Dino-memories! Keeps lovin' our Dino!