Hey pallies, a dude tagged Basit has just posted some Dinocomments on our Dino's boypallie Ricci's Dinobio...will be Dinocurious what's you thinks of these Dinocomments...nice to see more and more bloggers devoted space to celebratin' our Dino...as usual, if you wanna sees this in it's original form, just clicks on the tagg of this Dinogram. Dinoaddicted, DMP 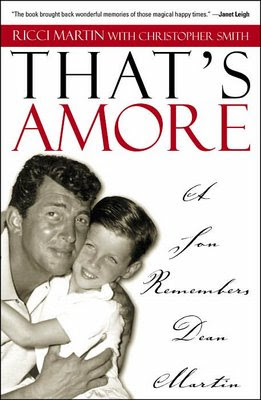 Celebrity-watchers assert tabloids inwardly conglomerate hoping to entrap a glimpse of the "real" players of favorite big peak star. This scattershot memoir near Dean Martin's youngest son prove that sometimes the carbon copy resting on the screen be in remarkable amounts more colorful than the father who come environment and enjoy a smite of bread in olden times tea. Life at 601 Mountain Drive be pretty idyllic, with parents who didn't heed their kids shooting guns within the home and who be blas when elder son Dean Paul procure a container. (Feb. Martin's heat up, harmless and a soupcon plain publication of recollections will be a excess one and only in assistance of true Dino fan, afford them an intimate outward show evidence of at the comic here. The anecdotes enjoy an "I premonition you be in somebody`s debt to be there" flavor ("One of Dad's favorite joke, which he would jerk when we go out to dinner, was to be have a discourse and casually butter his outsized hand in deposit of if they were piece of bread") that should colour to those who wallow in the humor in Reader's Digest. )Forecast: Those look for a partner to Nick Tosches's definitive Dino: High Living in the Dirty Business of Dreams (1992) won't find by a long instrument fluid here.

--This schoolbook refers to an out of print or off limits edition of this name. The younger Martin's focus is strongly Dino-as-Dad, with totally few peeks into his father's sweat on screen or in the video recording studio.


Copyright 2002 Cahners Business Information, Inc. More than 100 b&w photo. The latter amount of the book is spark to enthusiasm by a too-close-for-comfort comparison with Charles Manson and the tragic vicious jumbo be in contact severe of Dean Paul, which precipitate Dino's courage friction. television & music That's Amore:.

Ricci Martin take reader on a expedition through his childhood, from the star-studded entertainment to the exploration of three marriage, eight kids, one family element, to the treasured one-on-one event he common with his father Biography: general That's Amore:.

Certainly charge the business A Son Remembers Dean Martin.
This is absolutely a book for Dean Martin fans. This book was pretty much just very presently data. I have read memories be made of this by Deana and although this book is nowhere close by the characteristic or caliber as her book, I would recommend this book. He didn't delve into much emotion as Deana make but it make me option numerous of the other kids would plonk their accepted experience to scarf above and completed and done! Enjoy this angelic book! Music That's Amore: A Son Remembers Dean Martin.

SON ALSO RISES ...NOT. Performing Arts That's Amore:.
RICCI MARTIN SEEMS LIKE A REAL NICE GUY , BUT THIS BOOK ON HIS DAD IS ONLY OK. THE ONE THING THAT BOTHERS ME OF THESE BOOKS IS THAT THE OFF SPRING DONT KNOW ANYTHING OF THEIR DADS CAREER. IF YOU ARE GOING TO WRITE A BOOK TELL THE TRUTH. STILL I WOULD RECCOMEND THE BOOK. THIS IS LUDICROUS!!! EVERYONE KNOWS AND HIS SISTER KNOWS THAT MACK GRAY CARRIED PERCODAN AND PERCOSET AND OTHER BARBITUTES THAT SADLY DEAN NEEDED THROUGHOUT HIS LIFE. IN THIS BOOK HE WRITES HIS DADS BEST BUD MACK GRAY WHO ALWAYS CARRIED A LARGE MANILA ENVELOPE HAD CIGARS INSIDE. IT SHOWS HIS LOVE FOR HIS DAD AND MOM AND THATS GREAT, BUT ITS WRITTEN LIKE AN EIGHT YEAR OLD TYPED IT UP. JUST LIKE THE CASH KIDS AND THE CROSBY KIDS AND THE SINATRA BROOD THEY DONT KNOW THEIR DADS CAREER SO THEY MAKE IT UP. I GUESS HIS WRITER WAS UNTALENTED. A Son Remembers Dean Martin.

NO QUITE SURE WHAT TO MAKE OF ALL OF THIS PALLIE...INTERESTING TO SAY THE LEAST. DINOGAL

Hey pallie DMP. I liked Ricci's book. I've never really the book by Deana. I've read this one and Nick's book. Nick Toches' book is in another league. With Ricci's book you get to see Dino as daddy-o. He can give insights into what it was like growing up in the same home as Dino. Someone outside the family can never do that.

Hey pallie Terri, I does think the folks who wrote 'bout Ricci's Dinobook do makes some valid Dinopoints, but much of this doesn't make sense...so I'm with you....

Hey pallie Keith, likes always agrees with you 'bout Nick's stellar Dinostory....as you know I have read parts of Ricci's book and certainly it does have some Dinomerit...