Hey pallies, likes I am likes totally Dinopsyched to find this cool Dinotrib by a Dinoholic tagged Jeff Ircink. Jeff just lefts me some cool Dinopatter and it turns out that my new pallie KNOWS RICCI MARTIN and has spent time with the Jeanne as well (checks it out in the most recent Dinopost). Loves that Jeff diggs our Dino so much that he often wears a pinkie ring in our Dino's honor. If you wanna checks out this dude's Dinothoughts in their original form, likes just clicks on the tagg of this Dinogram. Dinodiggin,DMP

At the Grammy's last Sunday, after announcing that Dean Martin was the recipient of a Grammy for Lifetime Achievement, Queen Latifah attempted ('cause I know SHE didn't write this) to tie Martin's award in to the next act, by introducing M.I.A. (never heard of her) and Kanye West (wish I hadn't heard of him), T.I. (the famous silent film director, Thomas Ince?), Jay Z and Lil Wayne, who performed "Swagga Like Us." The performance was in black and white, and the men were dressed in tuxes as a tribute to the Rat Pack. In my opinion, a pathetic and awkward segue from Martin's award. 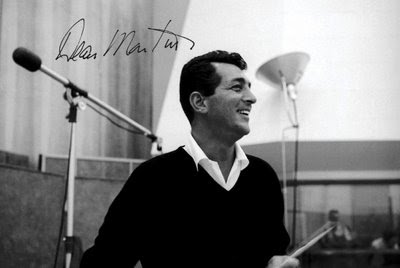 The legendary Martin received a gold record in 2004 for his fastest-selling album ever, which also hit the iTunes Top 10. For the week ending December 23, 2006, the Dean Martin and Martina McBride duet of "Baby, It's Cold Outside" reached #7 on the R&R AC chart. It also went to #36 on the R&R Country chart.


Martin, who passed away in 1995, was at one time the highest paid entertainer in the world. First famous as part of the Martin & Lewis comedy team (Jerry Lewis, who's receiving an honorary Oscar this year), Deano went on to become an esteemed member of the Rat Pack and his movies, recording career and television shows made him one of the most beloved entertainers of all time. In the day, you were extremely lucky to either get a ticket to see Martin & Lewis perform, to see the Rat Pack kibitz or to see Deano perform in Vegas as a solo act.
The pinkie ring I wear, at times, I wear in tribute to this man.


(Incidentally, The Rat Pack was largely responsible for the integration of Las Vegas. Sinatra and Martin steadfastly refused to appear anywhere that barred Sammy Davis, Jr., forcing the casinos to open their doors to African-American entertainers and patrons, and to drop restrictive covenants against Jews.)

Hey pallie DMP. I was happy to see Dino receive this award. I think it was all handled badly. They didn't even give him a proper tribute at all. It was very quick. That was the wrong act to have there. I wish they would have had somebody do one of Dino's songs. It doesn't surprise me though. The Grammys make a lot of mistakes over the years.

Hey pallie Keith, knows that I am glad that I didn't see it...still very Dinocomfortin' to know that our Dino finally got a bit of his due...and at the same time our Dino's newest album "AMORE" hits #1 on Billboard's Pop Chart...provin' our Dino is still on top and always will be..