A Rat Pack of Bubblegum

Hey pallies, thoughts you would enjoy this post on our Dino's boypallie Dino Jr.'s swingin' Dinocombo.... Dino, Desi, and Billy. This is from a cool blog tagged Katz Komments. Did not realize that Dino Jr. was only the tender age of 11 when uncle frankie discovered his little musical combo and signed 'em to Reprise Records. Enjoys this very creative and informative bit of Dinohistory. If you wanna read this in it's original format, just clicks on the tagg of this Dinogram (there are more cool pixs with this post). So, so sad that our Dino's youngen' Dino Jr. crashed...truly believe he woulda eventually followed in his daddy-os footsteps.

And, likes as a added bonus pallies, likes checks out the clip of Dino, Desi, and Billy's tune "Not The Lovin' Kind" at the end of this post. Dinodelightedly, DMP

A Rat Pack of Bubblegum 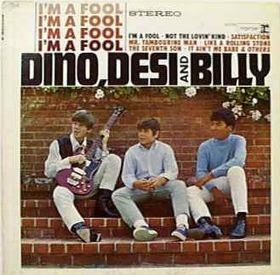 The greatest joy of having a college radio show was that you were allowed, nay, encouraged, to play whatever you want. At least that was the case at WHRW, SUNY-Binghamton, in the early '80's. Proudly I re-introduced Annette Funicello to my listening audience, "Secret Surfin' Spot" being the track of choice.

Another album I was drawn to was Dino, Desi and Billy's I'm a Fool. I'm going on the assumption that most readers would guess there are higher show biz forces at work. Yes, Dino was Dean Martin's son. Sure, Desi was the spawn of Lucy and Desi Arnaz. The real one, not Little Ricky. Billy? Son of joey Bishop perhaps. Nephew of Buddy Hackett maybe? No and no. Billy was Billy Hinche. Who, you are no doubt asking, was this Hinche boy? He was the son of a real estate hawker whose top shelf clients included Dean Martin and Frank Sinatra.


The story goes that the boys, fellow classmates at Beverly Hills Catholic School, were rehearsing up in young Martin's room when Uncle Frank came by. As Billy's dad would say, "location, location, location." Suitably impressed, or terribly drunk, Frank thought the trio should be recording for his Reprise label and pronto. Off they went, to the studio where they would be produced by Lee Hazlewood, arranged by Hazlewood and Jack Nitzsche and accompanied by guitar god James Burton and future Derek and The Dominoes drummer and committer of matricide, Jim Gordon.


The album, I'm a Fool, is to my ears, good clean fun and, if you approach it the right way, pretty darn good. Interestingly, the boys taste is Dylan and The Byrds, not British Invasion. Covers of both artists abound. The originals are not. "I'm a Fool" is "Hang On Sloopy" set to different words. "The Rebel Kind" could be an outtake from the Stones Out of Our Head. These folk-rock manques do a passable Byrds imitation. They could have been playing at a local bar. It's only at the end of the last cut, "Seventh Son," that their youth is fully on display. Some immature gibberish about which of the fortunate sons is "the one" as per the song's lyrics, reveals how young they are. Dino and Desi were only 11, Billy 13. Pretty ballsy to take on "Like a Rolling Stone" and "Chimes of Freedom."


What I enjoyed listening to the album today was the innocence of the era, when the sons of the powerful sought to become pop stars, not president.
Posted by Katz Komments at 8:48 AM

Hey pallie DMP. This is really cool. I'm always eager to learn more about DDB. This was a great way to do just that. Cheers!

Hey pallie Keith, does trys to do my very Dinobest to helps educate all my Dinoholic pallies in the Dinostory and 'bout all thin's family Martin....