Hey pallies, the Dinonews just keeps gettin' cooler and cooler. Thanks to a young Dinolovin' and Dinosingin' pallie of my tagged Josh, I learned that Capitol/EMI will be releasin' a new Dino CD, "AMORE," on Tuesday, January 27. A press release went out December 11 and likes can't figure out how a Dinoholic such as I missed readin' this stellar Dinonews. All Dinomusic is worthy of ownership, and this new Dinocollection will be no exception. No one sings Amore likes our Dino, so waitin' with deep Dinoanticipation for Tuesday to arrive. Loves this Dinocover so very Dinomuch as well!!!! If you wanna read this in it's original format (our Dino's space at myspace), likes just clicks on the tagg of this Dinogram. With Likes Total Dinoanticipatin', DMP 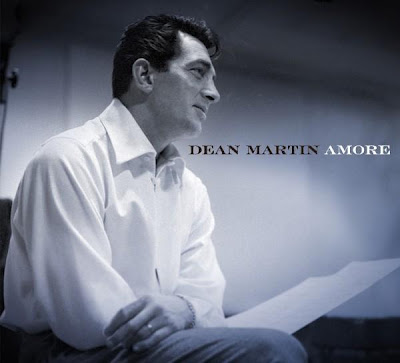 
Hollywood, California – December 11, 2008 - Dean Martin’s most romantic love songs have been gathered for a mood-setting collection, Amore, to be released January 27 by Capitol/EMI, just in time for Valentine’s Day. Amore features 15 classics, including “You’re Nobody ‘Til Somebody Loves You,” “Just In Time,” “That’s Amore,” “I’ve Grown Accustomed To Her Face” and “Dream A Little Dream Of Me.”

For Dean Martin, singing came as naturally as breathing. Supple and warm, his vocals dance from breath to word as gracefully as Fred Astaire and Ginger Rogers gliding in perfect step across the parquetry. Effortlessly cool and dynamic in his life and career, Martin’s performances showcased his trademark style of casual, easy charm. His timeless love songs remain universal favorites and perfect accompaniments to any romantic occasion.

Martin’s velvet voice provided his entry into show business, when he began singing professionally in Ohio’s ballrooms. He built a loyal following and moved on to the supper clubs and cabarets of New York City, before moving to Los Angeles and signing with Capitol Records. Martin’s meteoric rise to fame made him a big-screen draw and landed him acclaimed roles alongside film legends, including John Wayne and Marlon Brando.

Dean Martin is recognized as one of the 20th Century’s greatest entertainers for his decades of hit recordings, films, TV shows and stage performances. For more information, visit www.deanmartin.com.

Hey pallie DMP. That's so cool! I hadn't heard of this album myself. Wow! That's a really cool collection of Dino love songs. Nobody sings about amore like our Dino. Cheers!

Hey pallie Keith, now you now why it has been so hard to be hiatus, with such cool Dinoevents likes this happenin'...can't wait for Tuesday to gets me some more Dino....will go with out eatin' if necessary to gets my Dinofix...

WELL THIS IS SUCH GREAT NEWS...YET ANOTHER DINO ALBUM. IT MAKES ME HAPPY THAT WE KEEP GETTING MORE MORE & MORE DINO! IT'S GOT SOME OF MY FAVS ON THERE TOO...THANKS FOR POSTING PALLIE.

I HOPE YOU DO GET YOUR DINOCOPY TOMORROW PALLIE...YOU SO DESERVE IT!

Hey pallie Terri, likes you are so so Dinokind....actually only our Dino is deservin'....but even though I am underservin' of our great man...still he welcomes me into his world.....and yeah, really Dinowishin' that I will find this new Dinotreasure on the shelves tomorrow...

Awesome article. Can’t wait to see where the evolution of this thinking lands our society in the next couple of generations…

Hey pallie Cameron, man I loves your Dinothinkin'...'cause I does believe that our Dino will become more and more central to our life and times with each passin' Dinoday...thanks so much for droppin' some Dinopatter and hopes to hear from you again real Dinosoon....