Dean Martin As Matt Helm In The Ambushers

Hey pallies, taken a bit of Dinoeffort (but our Dino is always so worthy of all our Dinoefforts!!!)...but have replicated this cool Dinoreview of Matt Helm caper numero 3 written by my Dinodevoted pallie Keith over at his Dinoblog tagged "The Dino Lounge." Pallie Keith and I are likes of one Dinomind on "The Ambushers"....so worthy of our Dinoviewin', but the least of the four Dinoefforts. Hopes you enjoys readin' pallie Keith's Dinoperspectives...and if you clicks on the tagg of this Dinogram likes you can view it in it's original Dinoformat...and please consider leavin' pallie Keith some Dinopatter on this....he has put looks of Dinotime and Dinoenergy and mosts of all much Dinopassion into this Dinoeffort. Dinodelightedly, DMP

Dean Martin As Matt Helm In The Ambushers 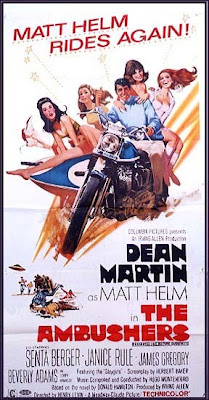 It's time for another review of one of the Matt Helm spy spoofs. I've purposely been delaying posting this particular review. I'll honestly admit that I'm not a big fan of this particular film. The Ambushers, released in 1967, is the third and weakest movie in the Matt Helm spy franchise. It follows two really cool movies The Silencers and Murderers' Row, both which hits theaters in 1966. The Wrecking Crew, which was released in 1968, would the last of the Matt Helm spy capers. I always felt like it rebounded the franchise and sent it out on a high note. 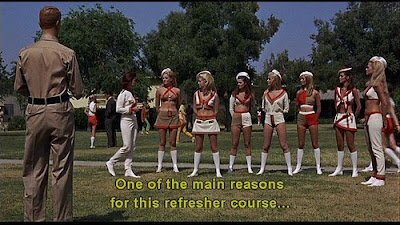 Dean Martin once again returns as Matt Helm. Beverly Adams (as Helm's sexy personal assistant Lovey Kravazit) and James Gregory (as Helm's ICE boss MacDonald) are back for a final time. Neither of them play in The Wrecking Crew. Lovey is nowhere to be seen, while Mac is played by John Larch. Henry Levin, the director of Murderers' Row, was again behind the camera on The Ambushers. The screenplay was written by Herbert Baker, who had also worked on Murderers' Row. While I enjoyed what Levin and Baker did on that film, I'm not sure exactly what happened here. 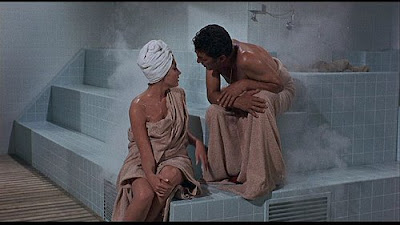 Uncle Sam has manufactured an experimental flying saucer as the latest weapon in its vast arsenal. ICE is supervising the security of the flying saucer. Sheila Summers (played by Janice Rule) is the ICE agent who is piloting the spacecraft. It seems that the saucer has a unique quality about it. The electro magnetic field produced by it is deadly to men. It must be flown by only the female of the species. The flying saucer is hijacked in Mexico where Sheila is captured and assaulted. 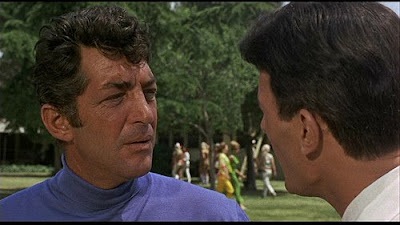 When we first see Matt Helm, he is at ICE's training center to brush up on his skills and help in the instruction of newer agents. It seems that all these agents in training are gorgeous young women. They are known as Slaygirls. The scenes at the center are actually some of my favorite of the movie. Matt is definitely in paradise here with all these hot babes. 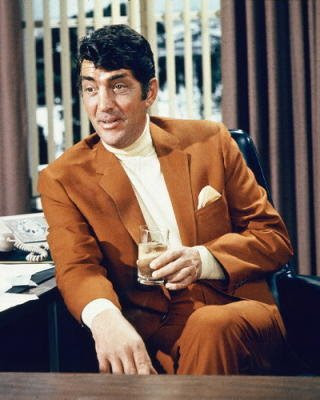 He encounters a crazed white-haired and pale woman who refuses to have anything to do with men. He discovers that this is Sheila. They go way back. It seems that they had once worked on a mission together. When some bad guys make an attempt on her life, Matt rushes to the rescue. Sheila comes out of her catatonic condition, but she nows believe that she is the wife of Matt Helm. Their cover on a previous mission had been as a married couple. Sheila begans to remember a jingle for a beer company in Mexico. They believe it might be a link to what happened to her and the missing saucer. She tags along with Matt on his mission to Acapulco. Matt's cover will be that he's going to do a photo shoot on the brewery. 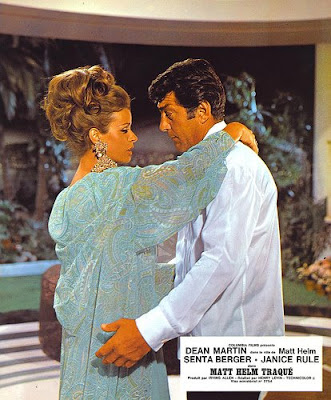 There Matt and Sheila meet up with Quintana (played by Kurt Kasznar) who runs the brewery. Quintana is a top henchman for Leopold Caselius aka Jose Ortega (Albert Salmi), the exiled ruler of a rogue nation. I don't want to give too much away, but it's not long before Matt and Sheila are fighting for their lives. They not only face Ortega and his men, but also other baddies who have come to Mexico. It seems that Ortega plans to sell the saucer to the highest bidder. Those seeking to buy the craft include Francesca Madeiros (played by Senta Berger), the best pilot employed by Big O, and a Middle Eastern assassin named Nassim. 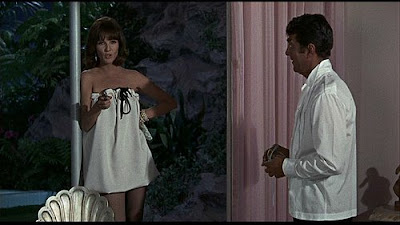 Senta Berger, one of my favorite female stars of the 60's and 70's, is not featured enough in this film. Her part as Francesca is way too small. She's one of the major highlights of this film for me. It's just that we don't get a chance to see enough of her. I love anytime she is on the screen. She has great chemistry with Dino in this movie. One of my favorite scenes is when she plays a seductive game with Matt Helm. I won't tell you exactly what happens there. 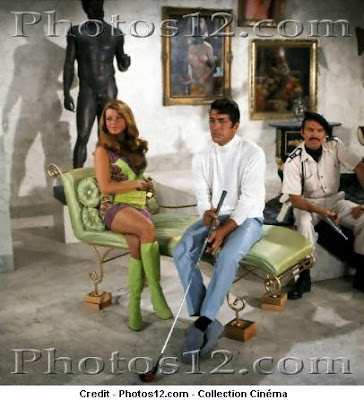 I have nothing against Janice Rule. I think she's a fine actress. I just think she was wrong for a Matt Helm spy spoof. She seems so out of place here. She's very different than the usual type of actresses that have played in these movies. There's something really missing in the movie. Another actress might have been better suited in this role. She just doesn't have the electricity that Stella Stevens or Ann-Margret had in their roles in the previous two films. 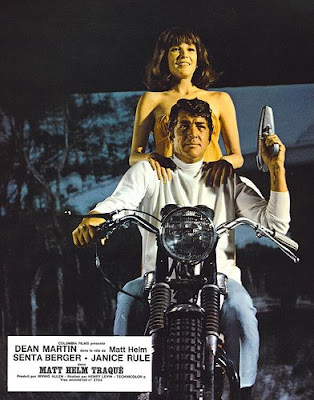 I'm also not a big fan of the main villain in this film. Albert Salmi as Ortega just doesn't intrigue me the way the madman of a spy movie should. He's my least favorite villain of the four films in the Matt Helm franchise. He is too sinister. He doesn't have that wicked sense of humor that the other villains tended to have. I actually much prefer his henchman Quintana (Kurt Kasznar), who really hams it up and chews the scenery so well. There is a really hilarious shoot-out between him and Matt Helm at the beer factory. Just imagine the boozy Dino and lots of beer. You should get the picture. 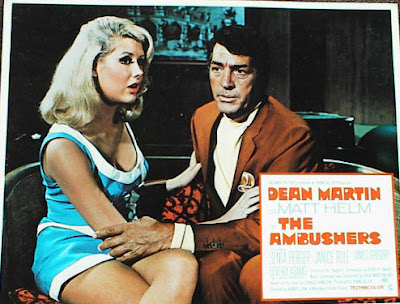 The special effects in the Matt Helm franchise do tend to be pretty standard for the era. I would have hoped that they might have been a little better this time around since the film has such a science fiction quality to it. Gadgets used by the various characters in this film include a bullet shooting bra, a device that makes men's pants fall down, a weapon that doesn't do much more than make drinks, cigarettes that emit laughing gas, lipstick laced with drugs, etc. Matt Helm even has in his truck a portable bachelor bad. This thing has to be seen to be believed. It's always funny to see what sort of cheesy gadgets will be used in each film.

The musical scores for the first two films were done by Elmer Bernstein and Lalo Schifrin. This time Hugo Montenegro was the man in charge of the music. I'm a huge fan of his style of music. His lounge score is really groovy and catchy. It infects the movie with such a cool and hip vibe. The intro sequence to The Ambushers features a theme song by Boyce and Hart which considers women to be the real "ambushers." 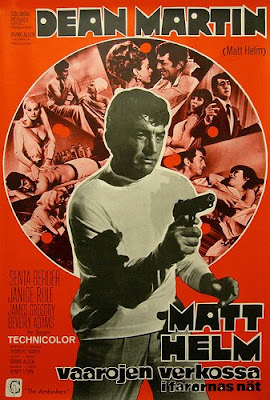 There is definitely lots of eye candy on display throughout the film. Besides the gorgeous and luscious Senta Berger, there are the female ICE agents at the beginning and end of the film, as well as some models at a fashion show down in Mexico. This film doesn't disappoint in that department. There is also a very hot (no pun intended) scene of Matt and his assistant Lovey in a steambath at the start of the film.

I hope I haven't been too hard on this film. I do want you to see if if you haven't. The Matt Helm movies are not high art. They never pretend to be. They are just good campy escapist fun. That's how they should be enjoyed. I do think that this one was a little substandard to the other three. There are still plenty of things I liked in this movie. I'm glad I saw it. I do believe that are things that could have been improved on. These four films are all available in the Matt Helm Lounge DVD set. It's not like you have to buy it separately. You get all four spy flicks together. I hope you'll give it a chance if you haven't seen it. Cheers!

Hey pallie DMP. Thanks for sharing this with your readers here at the Dinoblog. I hope everybody enjoys. While it's my least favorite of the Matt Helm spy flicks, I still enjoyed writing up this review of it. Cheers!

Hey pallie Keith, likes I tries to feature the best of the best Dino on the net and your stellar Dinoview certainly Dinoqualifies...thanks for showin' your Dinolove in this way....

Hey pallie Terri, why thanks so much Dino-gal...does takes some Dinoeffort to gets all those Dinopixs copied and placed...but as I say our Dino is worthy of all our possible Dinoefforts on his behalf...and pallie Keith did do a way stellar Dinojob with this Dinoreview...

These movies are among my faves, and the girls...well, let's just say the 50s-60s period of glamour sets the standard! Have to admit I don't have these on DVD yet, will remedy that shortly.

Hey pallie Nick, likes any true Dinophile certainly can't be without the Helm quartet and likes all four only retail for 'round 25 bucks and even less at most internet sites...some much pure Dinopleasure for such little bread. BTW pallie, does you have a fav of the Dinoquartet? Mine bein' numero duo..."Murders' Row"...truly the Dinohotest of the hot...

OK Dinophiles, time to put on your thinking caps!

Does anyone know if the "flying saucer" in this movie was made specifically for this film or was it recycled from an earlier TV or film production? I can't seem to find any info on it anywhere. Thanks!

Hey pallie, likes that Dinoquire has never comes up before....if I can locate any Dinoinfo will be sure to share it here....thanks so much for droppin' by the ol' ilovedinomartin Dinoblog and leavin' some Dinopatter.....