Martin’s clearly hauling the load for both

In John's first take on this flick scribed back in 2006, he ain't got much good to say 'bout Mr. Frank Sinatra, while showin' at least a bit of Dino-appreciato sayin' "Martin’s clearly hauling the load for both."  As usual Mr. McElwee offers a number of behind the scene insights that we didn't know before, so readin' this prose is worth the price of admission to learn, for example, that our Dino's take for starrin' in this flick was a mere "$250.000" while Mr. Sinatra received "$750.000 against 10%."

Likes the other thin' we appreciate 'bout this first review are the Dino-images that John chose to share with his readership startin' with a poster for the flick that we ain't ever seen before.  Our most beloved Dino looks so dashin' 'n darin' in the cool candids, and likes we are swankly swankly smitten by the shot of our Dino 'long side the 3 Stooges!

Once 'gain, we salutes Mr. John McElwee for more Dino-devotion from his pen and we will return soon with John's take two on "4 For Texas."  To checks this out in it's original source, simply clicks on the tag of this here Dino-message.   Deeply in Dino, DMP 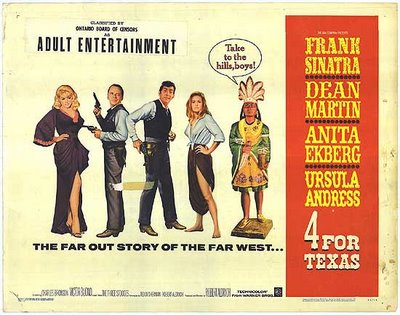 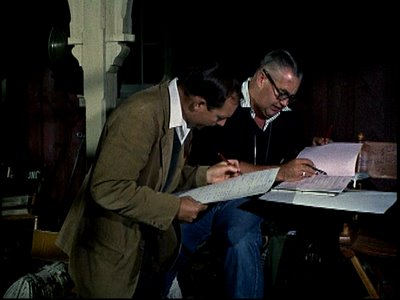 Part Two Of Robert Aldrich and 4 For Texas 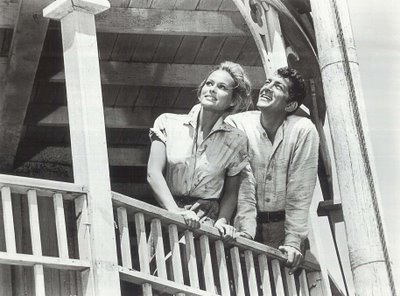 Should you want to introduce a civilian to the joys of Rat Pack frolicking this Christmas, take my advice and give them CD’s. You’ll gain few friends handing out 4 For Texas on DVD. In fact, most of those Frank n’ Deans from the sixties would amount to so much coal in my stocking, though I suppose they have their adherents. I can still enjoy Ocean’s 11, and of course, Some Came Running rests comfortably on a fifties pantheon, but what ofSergeants 3 (seemingly deadlocked within Sinatra’s estate and out of circulation for decades), Robin and The Seven Hoods, Marriage On The Rocks, and today’s object of scorn, 4 For Texas? Their humor seldom aspires beyond the level of Playboy Party Jokes, and as often evokes dog-eared back pages from Adam or Nugget. Rat Pack movies were in no way to be taken seriously, least of all by their stars. You needed burnouts like Lewis Milestone or tackle dummies with Gordon Douglas’ stamina to endure Frank’s abuse. Aldrich was way too good for such an enterprise. When I read that Sinatra got $750,000 against 10% on 4 For Texas (to Dean’s 250,000), it was clear a lot of money had been paid under false pretenses, especially when you observe how little he actually doesin the film. The director initially touched off Frank’s fuse when he scheduled ten days on a desert location for that opening stagecoach pursuit. Sinatra replied he’d be there for five, then faded two days ahead of that commitment. He’s to blame for the ruination of this show. Aldrich spoke well of Dean in hindsight, but he was ready to litigate on Frank. Estimates suggested the recalcitrant star worked only eighty hours over thirty-seven days. Martin’s clearly hauling the load for both, especially in an excruciating second half. He’d been on board with Aldrich’s script from early on, hoping to lure James Stewart or Robert Mitchum as co-star. Cruel fate gave them Sinatra at the eleventh hour. The star lived down to his reputation --- arriving late and unprepared, demanding pages be lopped from the script, insistance upon a personal hairpiece handler, etc. If the director thought he’d had a bad time with Davis and Crawford, he was about to find out how things could be worse. 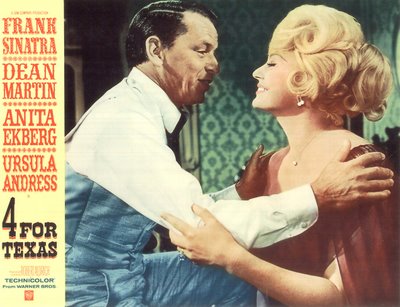 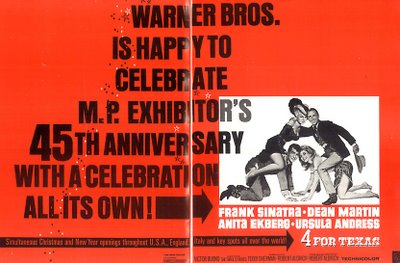 I always thought Aldrich was better doing serious with comedy than comedy with serious. 4 For Texas opens with a scene that would challenge the commitment of Dean Martin’s most forgiving admirers. He’s on a besieged coach with meek little Percy Helton, forever the figure of fun in a thousand shows, unceremoniously shot dead by the villains, and having his pockets picked by a the same callous Dean who moments before identified himself as thegood guy. This gallows humor has a particularly nasty smell, and it pervades much of the action to come. It also reveals the cruelty that underlies much of the Rat Pack’s humor. Would Vegas Dean react similarly if some poor chump at Sands concert ringside pitched forward with a bourbon induced coronary? You wonder as he steals Helton’s watch and smirkingly reads the inscription. Was this really the sort of image Dean wanted to project? Nothing makes you squirm like comical anti-heroes who go too far. This one disturbing scene sent my mind in a dozen directions --- like maybe I’m poolside at the Tropicana in 1962 and the Pack walks by. They say Dean projected Look, But Don’t Touch. With Frank, it was Don’t Even Look. Must have been disillusioning for a lot of fans that tried to approach these two. 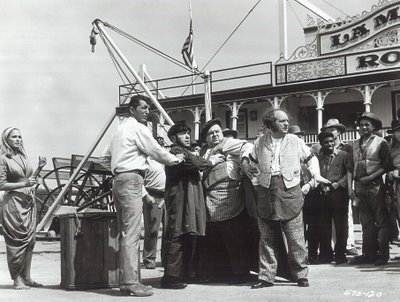 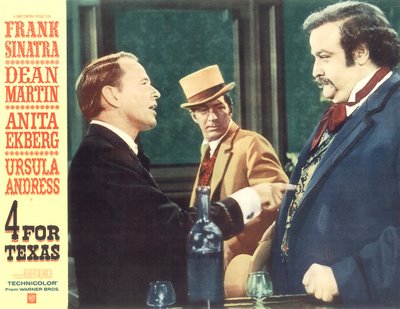 Frank goes in for petty meanness as well, though it’s more expected coming from him. There’s a scene wherein corpulent Victor Buono reports to town boss Frank for his marching orders. Poor Vic is swaddled in wool suits and strangulating ascot ties. DVD clarity reveals beads of perspiration in virtually all his scenes. You wish this discomfited man could have played it all in gym trunks with a glass of ice tea in his hand, an admittedly less engaging visual prospect, but a merciful alternative to the costumes he wears. Fat people are there to be ridiculed in a Rat Pack universe, so bullying Frank takes pains to remind Buono that he doesn’t fit the bill with regards servicing Anita Ekberg, her own Amazonian proportions ironically more congenial to a man of Vic’s size as opposed to shrimpy Frank. This is the sort of condescension that goes on between Sinatra and everyone he shares scenes with, providing unintended parallels to behind-the-camera rancor provoked by the star’s imperious attitude. Dean had to be annoyed at times, but at least he takes pride of place in the matter of romantic pair-offs (as if romance could have anyapplication to these Rat Pack smoker reels). Ursula Andress, fresh off Dr. No’s Jamaica beach, must surely have quickened the pace of roue Dean's forty-six year-old heart, while alleged cock-of-the-walk Frank is cruelly paired with hulking Ekberg, she of bat-wing eyelashes fluttering beneath hornet nest wigs. Her summons to Frank for intimate dalliance plays more like a threat to his comparatively delicate frame, as she looks fully capable of wrestling him to a standstill. 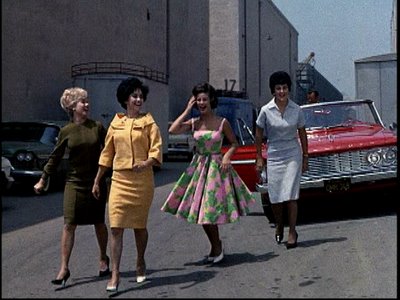 Sinatra lies around the whole time getting shaved and manicured. How does such a sedentary figure become top dog in Galveston? Dean’s slightly less plausible as a lawyer turned amoral thief and gambler, shading his characterization by making preposterous gifts to an orphanage. Three Stooges fans are well aware of the boy’s belated cameo during the last thirty minutes, though you get the impression neither Dean nor Aldrich had caught their act before. Jules White should have been along to wave the baton, for their pallid clowning here makes the Stooge’s own Sappy Bullfighters look like The Gold Rush by comparison. Arthur Godfrey shows up momentarily, but that gag lays flat today, as who remembers Arthur Godfrey? More engaging guests may well have been four Texas beauty contest winners exiting the shiny Plymouth shown here. Part of their pageant bounty was a week doing extra work on 4 For Texas. I’d love to sit down with one of them today. The four occupied barstools on Dean’s gambling ship. From what I’ve read, there were Sinatra imported call girls filling period gowns as well. Were those Lone Star innocents despoiled by an encounter with seasoned pros? Champ seducers Frank and Dean must surely have put in bids as well --- it was almost compulsory with these two. No doubt the Texas girls took home insights, if not wisdom, they’d have been years coming by otherwise.

Two longtime friends of the Greenbriar, Edwin T. Arnold and Eugene L. Miller, have contributed a pair of outstanding books to the Aldrich canon. The Films and Career Of Robert Aldrich is analysis based largely on reflections of those who worked with the director, as well as thorough research by the writers. Robert Aldrich Interviews is a collection of these representing Aldrich at various stages of his life and work. Both books are a must, and can be got HERE and HERE.
Posted by dino martin peters at 8:18 AM

What an amazing read and most people, esp me, really had no idea of all the drama that is going on behind the scenes of this film project. It's like a soap opera to say the least. It seems once again Dean is left to try and carry the whole production and yet he didn't even come close to getting the money that Frank did, esp for very little work he did. Stories like this give me an even better appreciation of Dean and a lesser one for others. Thank you for this incredible read my friend!

Hey pallies, likes Scotty-o, we are always glads to help a fellow pallie grow in their knowin', lovin', honorin', and appreciatin' of our main man, our King of Cool, the one, the only Dino! Keeps lovin',keeps sharin' our Dino!