Hey pallies, likes we interrupt our current series of Dino-devotion scribed by Mr. John McElwee to share this most marvelous moment of Dino-adulation that came our way via google Dino-'lerts.  From  Mr. Roger Friedman's self-tagged blog "Roger Friedman's SHOWBIZ 411 HOLLYWOOD TO THE HUDSON" comes his October 7 post, "Exclusive: Jerry Lewis Listens to Dean Martin’s Music “All the Time– All of It– I Always Listen to My Partner’s Stuff.”

It's a face-to-face interview that Friedman conducted with our most beloved Dino's most beloved partner Mr. Jerry Lewis backstage of the Museum of the Moving Image in Queens on October 6 after Mr. Lewis had shared a one hour interview with one of his former directors, Mr. Martin Scorsese. We are sharin' a brief  Dino-centric excerpt from Mr. Friedman's post that you can view in it's entirety by clickin' on the tag of this Dino-prose.

Roger quired Mr. Lewis 'bout "does he listen to Dean Martin’s music at all? Does he have a favorite song?"  Mr. Lewis' remarkable response is so so fabulously full of absolutely awesome adulation of our Dino that it warms our Dino-heart through and through and is bringin' us Dino-happiness beyond measure.  Likes, we just had to bring you this Dino-devotion as soon as possible!

We thanks Mr. Roger Friedman for askin' Mr. Jerry Lewis 'bout his passion for his partner's music and sharin' it at his beautiful blog.  Most of all, we thanks Mr. Lewis for so beautifully 'n boldly sharin' his ever-lastin' love for our most beloved Dino with the universe.  We are thrilled beyond thrilled to know Mr. Lewis' deepest of deep respect for our main man.   Dino-always, ever, and only, DMP


Exclusive: Jerry Lewis Listens to Dean Martin’s Music “All the Time– All of It– I Always Listen to My Partner’s Stuff” 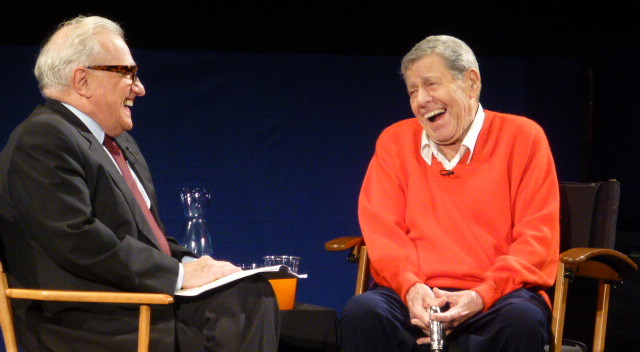 After the the one hour talk, I was backstage with Scorsese and Lewis, who will turn 90 in March 2016. Jerry is sharper than a tack, hilariously funny, and dead serious when he comes to filmmaking. We covered a lot of subjects in a short time, but two things stuck out.

One: does he listen to Dean Martin’s music at all? Does he have a favorite song? Martin and Lewis were one of the most famous comedy teams in history until they broke up in 1956. They didn’t speak for years but finally made up in 1989, a few years before Martin’s death in 1995.

Jerry jumped right in at the question: “All the time. Oh yeah.” A favorite song? “All of it. I hear it all. I have it on two Bose units in my home, in my car, in my office.” Does it make him feel good? “Yes, but it’s a tough feeling because I wish he was here.” I tell him what a fan of I was of Dean Martin. Jerry was emphatic: “You should be. Everyone was a fan of my partner’s.”

Posted by dino martin peters at 10:56 AM

Touchin' to know of Jerry's deep deep respect for his main pal, Dean. I'm sure he misses him today as much as he ever has.

Hey pallie, likes Danny-o, likes we knew you wouldn't miss the op to respond to this most, as you sez, "touchin'" post. We would wager, likes Dino-holics likes us, Mr. Lewis misses our Dino ever more with each passin' day! Keeps lovin', keeps sharin' our most beloved Dino!