I couldn't be a bigger Dean Martin fan. 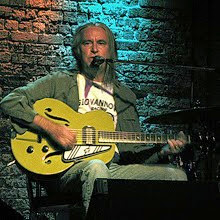 Hey pallies, likes likes what coulda be more 'citin' then sharin' 'nother pallie proclaimin' their awesome adulation of our most beloved Dino?!?!?!?!  That's what's on Dino-deck this very Dino-day.

Elliott's bio tell us that he himself is in the song writin' and song singin' biz himself tellin' us that he has "been writing songs and playing them since 1964. No gold records, no gold watch. I have been lucky enough to share bills with Chuck Berry, the Allman Brothers, Jimi Hendrix, the Flatlanders, Van Morrison and lots of other heroes of mine."

Likes we are incredibly impressed by Ronny's bio, and likes even more incredibly  impressed when in his recent blog post, "Dean and Jerry,"  he publicly professed "I couldn't be a bigger Dean Martin fan."  In his short post Elliott talks 'bout bein' deeply deeply  "devastated" by the break up of Martin and Lewis sayin' "In my nine year old mind it was ultimate tragedy, total loss."  A feelin' that truly truly many of us can likes totally totally related to.

Anyhow, Ronny relates how "watching the old clips of their comedy act changes my perspective." and led him to his deep devotion to our  one and only Dino!  It woulda be so so interestin' to hear more of just how watchin' those old clip led him to the Dino-truth.  Also Elliott references a Mr. Howard Zinn, but in our google searchin' we were unable to find anythin' related to our Dino and Mr. Lewis.

Mr. Elliott concludes his Dino-devotion with a vid clip of our Dino and his partner Mr. Lewis that we ain't remember seein' before.  It's 1952, June 22 to be precise, and our main man and his main man are on a telethon hosted by Mr. Bob Hope and Mr. Bing Crosby that is raisin' funds for the US Olympic team.  It shows our Dino and Jerry in full form.

We sez our thoughtful thanks to Mr. Ronny Elliott for so proudly and boldly confessin' his deeepest of deep delight in our most beloved Dino!  To checks this out in it's original format, simply clicks on the tag of this here Dino-gram.  Always Dino-awed, DMP

As a kid when I learned that Dean Martin and Jerry Lewis were breaking up as a team, I was devastated. In my nine year old mind it was ultimate tragedy, total loss.

Most of us kids assumed that Dean was being mean to Jerry. I'm guessing now that lots of our moms were glad to see Dino dumping the jerk.

Watching the old clips of their comedy act changes my perspective. I couldn't be a bigger Dean Martin fan. The fanfare for Jerry is the only thing that keeps me from being an out and out Francophile.

What a wonderful Saturday morning read my friend. It is wonderful to see another person sharing his thoughts and feelings about DM and as a special bonus a rare video clip to the dynamic duo DM and JL! It is amazing that something like this is still around today, esp before the video recorder really took hold. Someone was way ahead of his time and lucky for us they were on the ball. Thank you my friend for bringing tis gem our way.

Hey pallie, likes Scotty-o, how wonderful to enter the land of Dino and find such perfect patter from a Dino-holic likes youse. Always always, so so remarkably refreshin' to find 'nother who simply can't get 'nough of our main man. Keeps lovin', keeps sharin' our most beloved Dino!