Hey pallies, likes we are back 'gain this day with more fantastically fun Dino-photography courtesy of the pallies at the SAINT LOUIS POST-DISPATCH.  Likes faithful ilovedinomartin readers will remember that in the latter part of June of this very Dino-year, June 25 to be exact, we shared a great Dino-image from the POST-DISPATCH  that is part of a daily series of incredible images of "a curated collection of some of the best AP images that were taken from that date."

Likes last year on July 13, the pallies at this noteworthy newspaper shared the delightful Dino-image below featurin' our most beloved Dino and his most beloved partner Mr. Jerry Lewis with  monkey Pierre doin'  their version of "speak no evil, hear no evil, see no evil"---an  ol' Chinese proverb.  In doin' a wee bit of Dino-searchin' we discovered that Pierre was featured with Martin and Lewis in their second big screen epic,  "My Friend Irma Goes West."

We thanks the pallies at the SAINT LOUIS POST-DISPATCH for 'nother wonderfully wacky Dino-pose and we looks forward to many many more from 'em in the future.  To checks this out in it's original source, likes simply clicks on the tag of this Dino-report.  And, likes pallies as a bit of a Dino-bonus we share a youtube vid clip of our Dino, Jerry, and Pierre from "My Friend Irma Goes West." 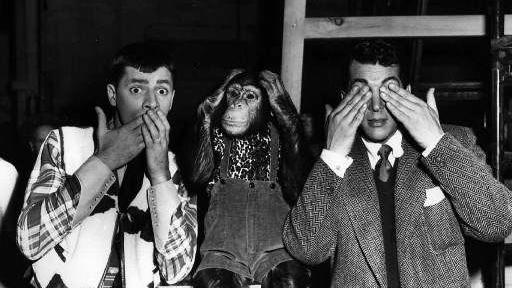 
Jerry finds a travel companion, Pierre, the monkey. From the movie "My Friend Irma Goes West."
Posted by dino martin peters at 7:23 AM