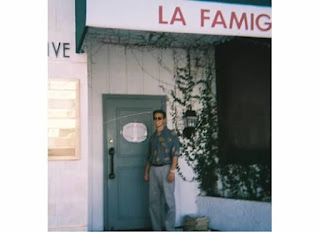 Happy 4th of July 2017 pallies! I'm extremely happy to be able to share another Dean Martin Festival 2017 Dino-pic.
Not much information on the middle of the night baseball game between Dino's Red and Franks Blue Eyes team. Sometime in the 1980's these two rivals took to the diamond in Absecon New Jersey. Obviously a  home game for the Sinatra Blue eyes. It's noted that the game came to a fierce 18-18 tie.
And one can only imagine given the Dino and the boys, that this was probably the only game in baseball history that was called off due to a sunrise!
Here is the only internet evidence of the historical event, where baseball spikes met the spikes of the liquid kind!
Red Eyes vs Blue Eyes

Once again another wonderful Dino-relic from the Jefferson County Museum in Steubenville. The shirt and hat our wonderful Dino donned for the famous game. A true Dino-treasue for sure pallies! 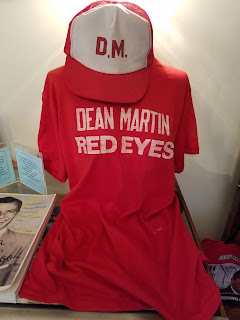 Haha!! Love this! Man...what a game that must've been! Shame there's not much info or pics covering' this EPIC & HISTORICAL event! Ha! Great pic, Ed!