Hey pallies, likes today we're back with one of the hundreds of Dino-drafts yet to see the light of Dino-day here at ilovedinomartin.  Likes, we were doin' a bit of groovy gazin' at some of dem drafts and we came 'pon one from 2016 that we decided was time to scribe some patter 'bout and get in published form for all youse Dino-philes to swankly savor.

From the intriguin'ly tagged blog "Exiled From Contentment" come part of a post tagged "Facebook ramblings - April 2016 where the unnamed blogger shared some  mini-ramblings from her "Facebook page along with an accompanying snapshot of the films I'm mini-reviewing."  What we are officially offerin' to youse today is their  respectful reflections on what we consider to be our most beloved Dino and his most beloved partner, Mr. Jerry Lewis' bestest of the best big screen capers.....the 1955 musical "Artists and Models."

This reviewer shares many many similar perspectives with us 'bout the wonderfulness of fantastic flick sharin' such incredible insights such as "It's top notch Martin & Lewis; the songs are catchy," and   "It looks beautiful too! It's photographed in VistaVision with candy Technicolor."  If we could pick only one of the 16 Martin and Lewis capers to personally own, it woulda, hands down be "Artists and Models" and we are totally touched that this reviewer had such a powerfully pleasurable first viewin' as well.  (btw, to set the record straight, we cherish all 15 of the Dino and Jerry dvds we have in our collection, only waitin' to find "Three Ring Circus" on DVD as well!)

We thanks the movin' picture reviewer at "Exiled From Contentment" for sharin' her deep delight in "Artists And Models" with her blog readership and surely bring more pallies into a deeper appreciation for our one and only Dino.  To checks this out in it's original source, simply clicks on the tag of this particular Dino-message. 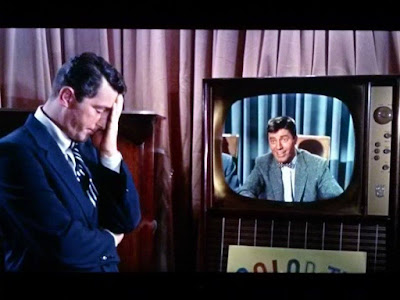 The first film Martin & Lewis made with director Frank Tashlin and the second-to-last they made together (they were pretty much done with each other by the follow-up, Hollywood or Bust). I'm gonna be honest with you, I never really got into Jerry Lewis except for the films he directed himself and his work with Tashlin. It's like Tashlin was the only one who operated on the same level with him and I guess it's because his experience animating/directing Bugs Bunny and Daffy Duck helped him understand a human cartoon like Lewis.

It's top notch Martin & Lewis; the songs are catchy (Martin crooning the bejesus out of "Innamorata", Lewis hey-ladying the fuck out of whatever the fuck he was singing) and the gags are a-plenty, only this time with Tashlin it mostly feels like a live-action cartoon.

It looks beautiful too! It's photographed in VistaVision with candy Technicolor and the production design is old-school studio work that I am always a sucker for. You can tell they put some serious money into this. There's also plenty of eye candy with attractive women all about the proceedings (Dorothy Malone! Anita Ekberg!) and hey, Dean Martin ain't a bad looker either. See, this was back when guys looked like men, none of this skinny tight pants wearing six-pack abs-having motherfuckers who can't fight worth a shit, says the guy with a big gut and a violent temper.

Tashlin might be the earliest example I can think of a director putting up what gets him off on-screen. Shameless leg shots and sexy costumes everywhere! Even one shot of a bound and gagged 21-year-old Shirley MacLaine wearing a tight fitting costume and hosiery made me feel funny/weird, in a Quentin Tarantino foot fetish kinda way. Shit, I think I had a similar kinky spider sense tingling when a similarly-clad Scarlett Johansson was tied up in Marvel's The Avengers. Jesus Christ. I thought I knew myself already. Thanks a lot, Tashlin, for giving me yet another feather to stick in my Sick Fuck cap.

This was my first time watching it, so maybe it's too early to tell, but in comparison to Hollywood or Bust, this one doesn't quite match up, maybe because Hollywood had a giant Great Dane in it and this one doesn't. You give me hot chicks and an awesome dog and I'll give you a happy man.

By the way, to my fellow heteros and lesbians and animal lovers (but not in that way); do you ever find yourself walking or driving and suddenly you see an attractive woman walking a dog? And because you only have about two seconds to enjoy this, you have to make the Sophie's Choice of ogling the sexy lady girl or going AWWWW over the doggy dog dog bow-wow? Or is it just me?

Anyway, Artists and Models is good times if you can stand Jerry Lewis' style of comedy and plus he calls himself "retarded" at one point, so there's that too.
Posted by dino martin peters at 7:38 AM

Hey pallie, likes Danny-o, perhaps we oughta have given a warnin' to our younger readership 'bout the, as you sez, "colorful" nature of this prose. Keeps lovin' 'n sharin' our most beloved Dino!