Hey pallies, likes we are deeply delighted to return for a second day of Dino-fun courtesy of "Bully"  of  "BULLY SAYS: Comics Oughta Be Fun!"  Likes after findin' the Dino-comic book post of yester-Dino-day, we knew we simply had to do a wee bit of searchin' of "Bully's" blog to see what else he might have shared Dino-wise.  Well, likes we weren't too surprise to find the post below accentin' the series of Dean Martin and Jerry Lewis comics, 'cause we have shared tons of stuff on 'em before.

Well, likes today, from "Bully's" post of May 21, 2013 we get a view of a comic book ad for "The Adventures of Dean Martin and Jerry Lewis that premiered in July-August 152.  Along with that, "Bully" shares the full color front page of the first issue as well as swank selected comic pages for our Dino-readin' pleasure.  And, likes we absolutely appreciates "Bully's" appreciato for this Dino-treasure, sayin' the comics  "are pretty sharp, well-cartooned, and genuinely funny."  We woulda totally 'gree with him and wishes that we coulda gets our hands on 'em ourselves.

Thanks once 'gain goes out to Mr. "Bully" for sharin' fun fun posts on our Dino in the comic books!
To checks this out in it's original source, simply clicks on the tag of this particular Dino-gram. 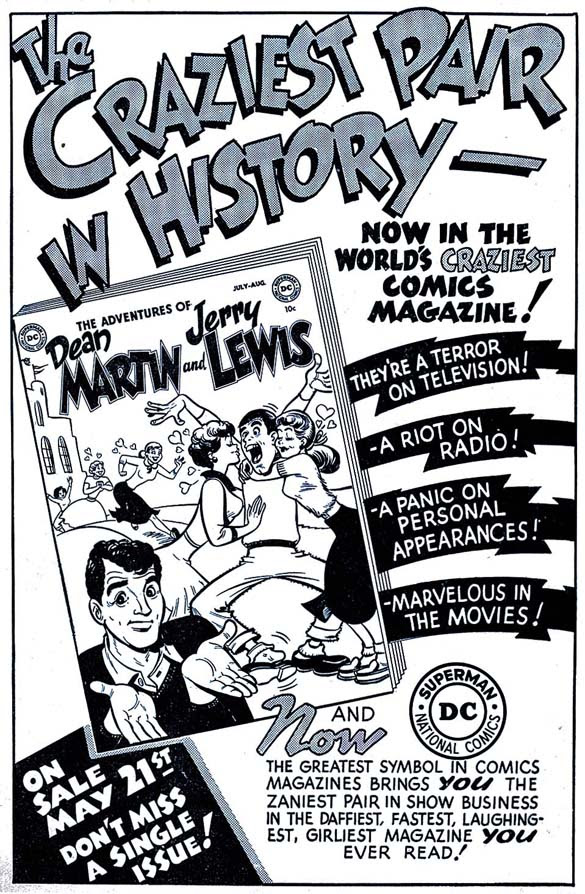 And here's that cover in glorious four-color: 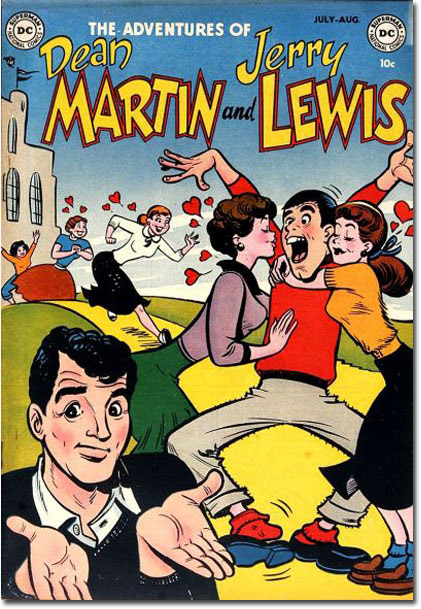 The Adventures of Dean Martin and Jerry Lewis featured cartoon versions of Dean 'n' Jerry (not to be confused with Tom & Jerry, or Ben & Jerry) in comedy stories of 2-3 chapters per issue, based on their screen personas. It's doubtful that Martin and Lewis had anything at all to do with the comics other than okaying their agents to license their names and likenesses, but I'd like to think they would have enjoyed it—it's actually pretty clever and funny. 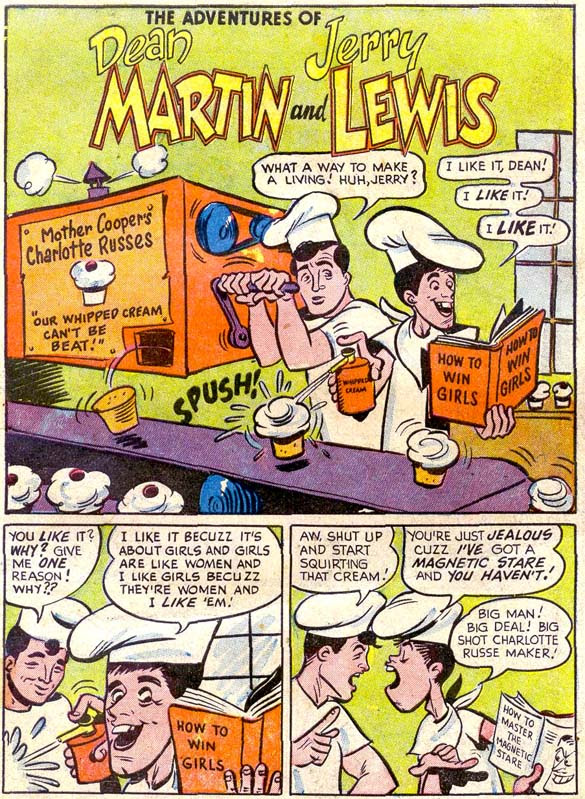 Thanks to Jerry's horsing around, the pair are soon fired by their boss at the pastry factory, opening a position for Lucy Ricardo. Dean Martin and Jerry Lewis (and its later replacement, The Adventures of Jerry Lewis) are pretty sharp, well-cartooned, and genuinely funny, much like its companion DC title The Adventures of Bob Hope. It's just too bad that expired licensing restrictions keep these comics from being reprinted for today's audience. They're a hoot!

Haha! So so crazy seein' our main man in his very own comic! I digs it!

Hey pallie, likes Danny-o, only wishes they woulda reprint these as the originals are crazy pricey if you can find 'em. Keeps lovin' our most beloved Dino!