Scotty's Sharin': Dean Martin Relaxing on the set of the Movie 'Sergeants 3' 1961

Hey pallies, gotta 'fess up that we are later then usual in our Dino-gramin' this last day of the month of May, but if this particular case, we gotta sez that we are totally totally thrilled to be so 'cause it allows us to share our deepest of deeply devoted to Dino dude Scotty's most recent Dino-devotion posted earlier this very Dino-day at his bountifully beau-ti-ful blog "BlueisKewl."

This time 'round Scotty has shared a beaut of a beaut, powerfully potent pose of our most beloved Dino catchin' some rays while relaxin' on the movie set of the cool caper a la the Rat Pack tagged "Sergeants 3."  Likes we knows that we have seen this particular pix of our Dino before, but we ain't remember postin' here, so we are pleased as punch to have our Scotty-o sharin' with all his remarkable readership so that we can share it here as well.

Likes in addition to this awesomely amazin' incredible image of our Dino, Scotty also has posted an image of an original theatre poster advertin' said flick as well as some potent prose that gives us all more delightful details 'bout "Sergeants 3."  We learned a couple of cool details that we don't remember hearin' before.

Once 'gain we sez our greatly grateful thank you very much to our Dino-pallie of Dino-pallies Scotty for helpin' spread his deep devotion to our Dino at his blog "BlueisKewl" and allowin' us to post it here as well.  To checks this out at it's original source, likes simply clicks on the tag of this here Dino-message.  Always, Dino, Always, DMP 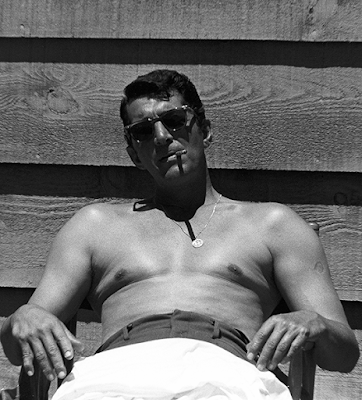 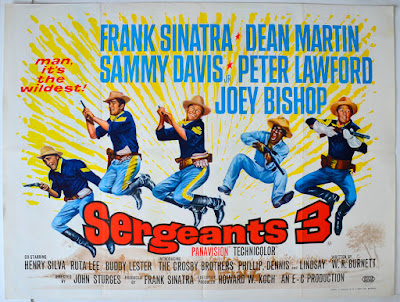 Sergeants 3 is a 1962 remake of Gunga Din (1939) set in the American West, directed by John Sturges and featuring Rat Pack icons Frank Sinatra, Dean Martin, Sammy Davis, Jr., Peter Lawford, and Joey Bishop. It was the last film to feature all five members of the Rat Pack due to Sinatra's falling out with Lawford.

Directed by John Sturges, written by W. R. Burnett, and produced by Frank Sinatra, the movie features Sinatra in the Victor McLaglen role, Martin in the Cary Grant part, Lawford replacing Douglas Fairbanks, Jr. and Davis in Sam Jaffe's originally titular supporting part. It was filmed in Kanab, Utah. The Thugee cult is replaced by the Ghost dancers with Michael Pate and Henry Silva appearing as Indians.

Sinatra wanted to use the title Soldiers Three but couldn't get the rights as the title was owned by MGM for another Gunga Din-inspired story set in India. Soldiers Three was a 1951 film, based on Rudyard Kipling's story, that starred David Niven, Walter Pidgeon and Stewart Granger.

Each of the Rat Pack's films contained a numeral in its title. The others were: Ocean's 11 (1960), Robin and the 7 Hoods (1964, with Joey Bishop absent and Bing Crosby replacing Peter Lawford), and 4 for Texas with Frank Sinatra, Dean Martin, Anita Ekberg and Ursula Andress as the four in the title, Charles Bronson as a villain, and the Three Stooges as additional comedy relief. Sinatra said of these Rat Pack films: "Of course they're not great movies, no one could claim that... but every movie I've made through my own company has made money."

The only Rat Pack film not produced by Sinatra was Ocean's 11, which earned $4.3 million in rentals at the North American box office, being ranked by Variety as the 14th highest-earning film of 1960.
Posted by dino martin peters at 3:45 PM

Thank you DMP and Danny G. for your continued support and kind words. I have not had a lot of luck coming across much in the way of Dean Martin material of late but of course this brought a smile to my face when i saw it. Even though this photograph is well know it was new to me which made it extra special.

Hey pallie, likes Scotty-o, likes we so so appreciate YOUR "continued support and kind words" as well man! We are always thrilled to hear that some Dino-treasure has brought a Dino-buddha-grin to your face! Keeps lovin' 'n sharin' our most beloved Dino!