Our Most Beloved Dino In "3 Ring Circus" 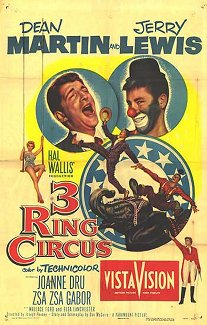 Hey pallies, likes after mentionin' "3 Ring Circus" in yesterday's Dino-gram, we happened on over to youtube and discovered that a pallie has posted the movie in it's entirety there...and that's greatly great, 'cause this particular Martin and Lewis caper has yet to make it to DVD and is one of those Dino-flicks that is hugely hard to get your hands on.

So, likes we decided that our Dino-devotion this day woulda be to shares with all youse Dino-philes the vid in all it's Dino-glory.  The youtube vid with a brief introduction await youse below.  We are delighted with the Dino-details shared on when it was filmed and when it was released as we can never ever get's 'nough Dino-knowledge!

We thanks the pallie "JERRY LEWIS FOREVER" for puttin' this fabulous flick up on youtube and we are proudly pleased to be able to share it to helps  all youse Dino-addicts get your Dino-fix for this Dino-day!  Dino-always, ever, and only, DMP


3 Ring Circus is a 1954 film comedy starring Dean Martin and Jerry Lewis. The picture was shot from February 17 to March 31, 1954 and released on December 25 by Paramount Pictures. The supporting cast includes Joanne Dru, Zsa Zsa Gabor, Wallace Ford, Sig Ruman, Nick Cravat, and Elsa Lanchester.
The film was the first starring Martin and Lewis to be shot in VistaVision. A clip from it was shown in a promotional short film, Paramount Presents VistaVision.
Posted by dino martin peters at 7:21 AM

A classic comedy if there ever was one. Thank you my friend for posting the link to this gem, i am sure Dean and Jerry fans will be delighted to find this enjoyable movie available whenever they have the time or the urge. I am surprised that this is not out on DVD as well as others you have mentioned recently. I wonder what the issue is? I would think that movies like this would be a money bonanza for whoever holds the rights to these classics today! I guess we will have to wait and see, maybe some day. :-)

Thank you again DMP for your tireless hard work, it is greatly appreciated.

Hey pallie, likes Scotty-o, there appeared to be lots of problems between our Dino and Mr. Lewis durin' the filmin' of this flick, and if we remember correctly that is a part of why this particular Martin and Lewis effort has not been included in the M&L DVD collections.
Keeps lovin' 'n sharin' our most beloved Dino!