"At War With The Army": The classic musical comedy starring Dean Martin and Jerry Lewis will enlist on Blu-ray this spring.

Hey pallies, likes more and more great Dino-news of new Dino-treasure bein' released just  keeps pourin' in from all over the 'net.  Likes today we takes you to the flick pad, "HIGH-DEF DIGEST
where scriber Mr. Tom Landy shares the news that the Dino and Jerry flick, "At War With The Army" is comin' out in Blu-ray DVD on March 24th.

Our most beloved Dino's big screen efforts have been kinda slow in gettin' the Blu-ray treatment, but we just know before it's over each and every Dino-classic will gets released in this high-def technology.  Accordin' to the prose below, it is the pallies at Kino Classics who will be doin' the releasin' of this one and only Dino-flick in public domain.

So, likes pallies marks your calenders for March 24th to grabs onto this comedy caper from the greatest comedy team ever.  ilovedinomartin sez our thanks to Mr. Tom Landy for puttin' us on to this Dino-news and spreadin' some Dino-devotion with his review.  To checks this out in it's original format, simply clicks on the first few words of today's Dino-report.


Hal Walker's 'At War with the Army' Announced for Blu-ray 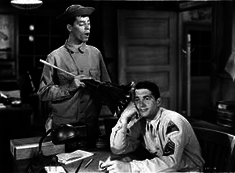 The classic musical comedy starring Dean Martin and Jerry Lewis will enlist on Blu-ray this spring.

In an early announcement to retailers, Kino Classics is working on 'At War with the Army' for Blu-ray on March 24.

After their supporting roles in My Friend Irma and My Friend Irma Goes West, At War with the Army was the first film starring the legendary duo of Dean Martin (Artists and Models) and Jerry Lewis (Scared Stiff)... they went on to co-star in thirteen more comedies becoming Paramount Pictures new comedy team and box office champs. Lewis is a hapless bungling private and Martin is his bossy first sergeant and ladies man with the crooner's voice. Together the duo is thrown into a series of classics gags and routines and some great musical pieces. Directed by Hal Walker (Road to Utopia, Sailor Beware), one of the few directors to work both with Martin & Lewis as well as with Hope & Crosby.

Specs and supplements have yet to be revealed, but the suggested list price for the Blu-ray is $24.95.

You can find the latest specs for 'At War with the Army' linked from our Blu-ray Release Schedule, where it is indexed under March 24. 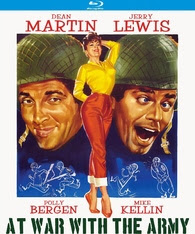 Order the Blu-ray
Posted by dino martin peters at 7:13 AM

This sounds like a a DM classic and one to put on my must see list. Thank you for bringing this info our way!

I hope you manage a happy weekend!

Hey pallie, likes Scotty-o likes everythin' our Dino does is classic man...but, likes this is the least of the Martin and Lewis capers...but still very very cool! Thanks for the patter dude....and, of course, likes keeps lovin' our most beloved Dino!