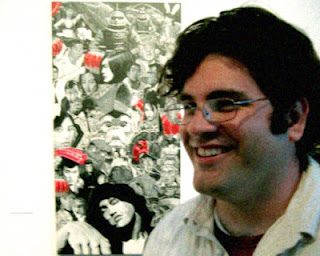 Hey pallies, likes there seems likes simply so so little time and so so much Dino to share, that we here at our humble little Dino-home always always feel likes we are behind the Dino-times.  Case in point.  One of our most delightful Dino-devotees, Mr. Ryan Ebelt has created quite a number of Dino-centric posts at his coolest of cool self-tagged blog, "RJE'S FRIENDS OF JUNIOR."

Ry is the most creative dude of many many talents, 'specially in the areas of art and writin' and it is always so so awesome to discover 'nother of his remarkable reviews of a Dino-flick.  We likes does try to keeps up with Ry, but recently bein' nudged by our Dino to check's out Ry's pad, we likes indeed discovered that we had missed by over half a year (so so sorry Ry) his incredible insights into one of our Dino's greatest western efforts, "BANDOLERO!"

So, here it is dudes, pallie Ry's  prose and pixs on the Dino classic, "BANDOLERO."  ilovedinomartin salutes Mr. Ryan Ebelt for his faithful to spreadin' Dino-devotion at his great blog and certainly helpin' many many to grow closer and closer to our most beloved Dino.  To checks this out in it's original format, simply clicks on the tag of this here Dino-report.  Dino-always, ever, and only, DMP

One of the most interesting aspect of the digital age is being able to see how people found their way to whatever you are posting. Of course, this is also how advertisers and marketers try to figure out how to shill more products to you whether you want them or not. That aside, every now and again, I like to sift through and see what it is about what I put up that brings in my audience. The one that keeps popping out to me is that my coverage of the strange tone of gang rape v. comedy in Hannie Caulder starring Raquel Welch has been a frequent tag that brings in the public. That's not so good.

On the lighter side, people looking for stuff on Dean Martin movies also find their searches directed my way. And now, I've been provided an opportunity to bring both those tastes together (...although, I'm not sure how to feel about this...) as well as close the book on Raquel's trilogy of western films with a look atBandolero! (1968).

The posters for Bandolero! promise a new fangled look at the old fashioned oater, which makes perfect sense as Sergio Leone had breathed new life into the Western in the U.S. following the release of A Fistful of Dollars in 1967. Try as they may, Hollywood never quite figured out the spaghetti western formula, and they shouldn't have: spaghetti's reflect an outsider's view of the media version of the Wild West, and Hollywood's spaghetti imitators were trying to reflect that reflection while being unable to escape the ties to the culture they themselves came from. Make sense?

Casting Dean Martin and Jimmy Stewart seems to me a stab at trying to bring in an older audience to this new, grittier version of the West. Casting Raquel...well...I think we all know that was a stab at bringing anything with a Y chromosome to the theater. In the movie, Martin plays Dee Bishop, an outlaw gunslinger formerly of the Confederacy, who ends up caught with his gang after a bank robbery goes south by Sheriff July Johnson (George Kennedy). During the skirmish, Dee's gang shoots the husband of Maria Stoner (Welch), which opens a relationship door for the amorous sheriff. Former Union soldier turned drifter Mace Bishop (Stewart), discovering that his brother's misdeeds will be leading him to the gallows, launches a plan that will free his brother and end up in kidnapping the young widow. This leads to the Sheriff going on a long chase after the gang into bandit country in Mexico where Mace will try and convince Dee to leave his life of crime.

The opening third of the movie, from the bank robbery to the eventual escape, is pure, thrilling movie adventure, but unfortunately the middle third sags from too much time in the saddle and a few too many heart-to-hearts between the brothers in between brush-ups between Mace and Dee's surly gang. The final third picks up the pace but is unfortunately a little too predictable from the moment we see, or rather, don't really see the bloodthirsty arrival of the Mexican bandits who slaughter the Sheriff's posse. And while Welch and Martin have the makings of some fun onscreen chemistry, the "falling for the bad boy" angle isn't quite enough to sell her falling so soon for the man who was responsible for her husband's death. Without getting into the details, there wasn't necessarily a lot of love lost in Mr. Stoner's death for Mrs. Stoner, but for a girl who worked her way up from nothing, to prostitution, to some creature comfort, doesn't quite add up to her going for the guy who murdered her meal ticket.

Having said all that, the movie works more than well enough, and I had a fine time watching it. While Raquel doesn't get a whole lot of screen time, Maria was definitely one of her better dramatic roles, and certainly of greater depth than the beautiful harpy she would play the following year in 100 Rifles. Martin and Stewart are, of course, old hands at this sort of thing. While they don't look anything like brothers, their natural ease of delivery sells it well enough, and they are a joy to watch together even when the riffs of their dialogue grows a little tired. The standout in many ways is Kennedy as July Johnson, an intriguing figure for a movie sheriff, who seems more interested in giving chase to these outlaws due to his love or lust for Mrs. Stoner than the sense of justice he keeps touting. In fact, it must've made an impression on Larry McMurtry who also named a sheriff in Lonesome Dove, July Johnson.

So if early Westerns are a little too white hat v. black hat for you, and spaghettis are a little too operatic v. nihilistic for you, then Bandolero! might provide a nice middle ground between the two: it's matured from the former, and doesn't strain itself trying to be the latter. For comparison, I would also recommend The Professionals (1966) starring Lee Marvin, Burt Lancaster, and Claudia Cardinale, which also featured a long chase into Mexico that involves a woman. It too features a cast of familiar and enjoyable old hands, but also has a few more twists to the plotting.