What I learned at Dean Martin’s Drinking School.

Hey pallies, likes the Dino-lovin' Dino-diggin' posts just keeps flowin' in from all over the web, and likes as freely as our most beloved Dino inbibed his fav liquid libations! Today our pallies at google blog search takes us to the ultra ubber cool pad, "emceerae" where swank nouveau hipster Mr. Andrew McRae swings with his well crafted post, "What I learned at Dean Martin’s Drinking School.

Pallie Andrew has made the very very wise decision to grow in our Dino and his post speaks of his first class in Dino-drinkin' at Toronto's bar "Margret on Dundas." As Mr. McRae descibes the Margret's clubbin' scene....."I highly recommended it if you’d like to stray from the ordinary. It is a perfect fit for the “swinging bachelor pad sleaze” of “Dean Martin’s Drinking School,” as coined by the event’s producer Martin Dronesclub."

Likes coulda goes on and on 'bout this post, but likes dudes, simply dive in and enjoy each and every groovy bit of Andy's pontifical patter. And, likes if you ever finds yourself in Toronto, you're gonna wanna wonder over to Margret's on the first Thursday of each month for 'nother edition of the Dino-school.

ilovedinomartin thanks Mr. Andrew McRae for puttin' us on to this Canadian way of honorin' our amorin' Dino...and likes makin' for a great Dino-amore month post. To checks this out in it's original format, simply clicks on the tag of this Dino-report. Dino-lovin' and Dino-learnin', DMP

What I learned at Dean Martin’s Drinking School. 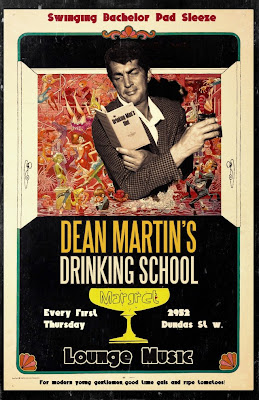 Like countless young men and women before me, as I’ve grown into my mid-twenties, I’ve been burdened with the question of “what am I going to do with my life?” However, all the while I HAVE been “doing,” I just haven’t been paying enough attention. So last night I took the proverbial bull by the horns, saddled up and headed back to school. Not just any old school of course because last night I had my first class at “Dean Martin’s Drinking School” at Margret on Dundas. Now, you may ask, what could you ever learn at a school like that? More than you’d think. Let’s review. 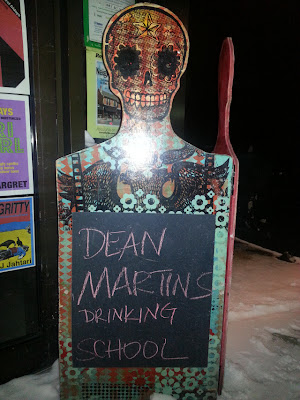 Margret is a wonderfully freaky little bar that’s tucked into Toronto’s west-end Junction neighbourhood. I won’t describe it in too much detail because the images in this blog can do that for me. I highly recommended it if you’d like to stray from the ordinary. It is a perfect fit for the “swinging bachelor pad sleaze” of “Dean Martin’s Drinking School,” as coined by the event’s producer Martin Dronesclub. 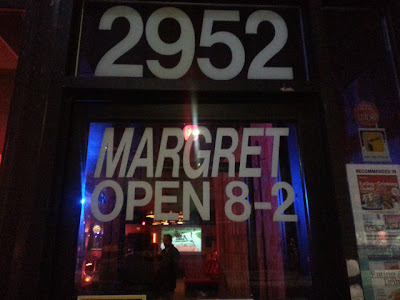 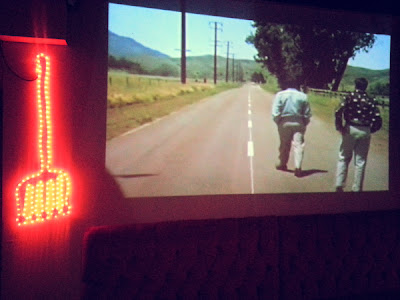 Martin, the DJ and Dean of the drinking school (huzzah), poured on the tunes from the velvety era of tobacco smoke filled rooms in the Dean Martin heyday, all whilst staying sober himself; an admirable trait. The two songs that I “shazammed” from the night were “Spooky” by Andy Williams and “Sunshine Superman” by Mel Torme’, but Shazam misheard the latter as the well-known version by Donovan.

So, the first thing that I learned at “Dean Martin’s Drinking School” is that I’m smarter than the Shazam app, because even though my “tags” that I’m referring to say Donovan, I was able to remember the name Mel Torme’ the next day, despite having drank much fine Scottish ale over the course of the evening. 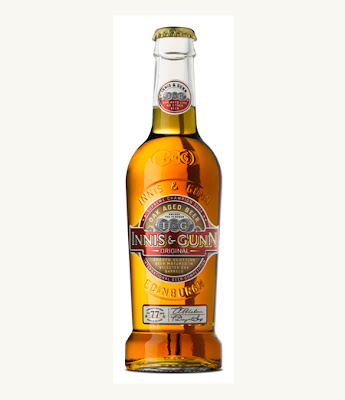 On that note, the second thing that I learned at school last night was that the fine Scottish ale is actually quite fairly priced at Margret. It is common practice for many bars to mark up the prices to upwards of quadruple the liquor store cost. In Margret for example, a can of Stiegl (a deceptively delicious Austrian brew), which retails for $2.45 for a 473 ml can in Ontario’s LCBO (Liquor Control Board of Ontario for all you non-local types), is priced at $7.25 in bar; a 196% markup. Margret also used to sell 40’s of malt liquor, such as Colt 45 and Olde English. Before their disappearance from the bar this past year, they were retailing for $14; a similar jump in price from the store cost as the Stiegl. The 40’s have since been replaced with large bottles of comparably premium beers, such as the aforementioned fine Scottish ale, Innis and Gunn. A 750 ml bottle retails for $6.65 in the LCBO stores, while in Margret it goes for $14, which is not as large of a price gap. Despite being less liquid than a 40 of malt liquor (1.18 litres or 40 ounces, duh), the improved quality of brew and lessened detriment to your life makes the Innis and Gunn a superior choice at the bar. The markup sits at a cozy 110%, which is exactly the amount of effort I give every time. Well done Margret, well done. I therefore learned that in drinking two bottles of Innis and Gunn I saved no money because I spent $28 + tips on them. I also learned how to figure out the markup percentage on the beers, so that has to count for something…although my math could be wrong for all I know. But I digress. 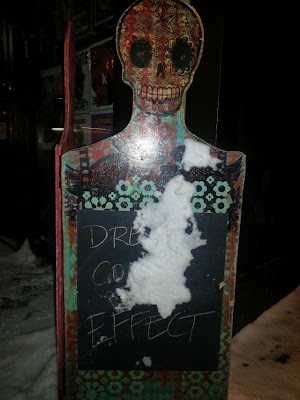 Dress code was of course in full effect, but as you can see by the snow covered sign, Toronto is currently getting pounded by a heavy duty snow storm that started yesterday. 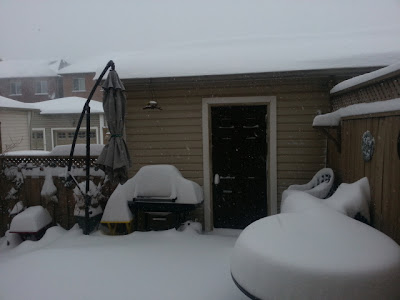 My backyard this afternoon.

So there wasn’t exactly a whole lot of people there to adhere to said code. I think we all learned that snowstorms (or other things such as responsibilities) will prevent people from going out to a bar on a weeknight, which is an astounding revelation. Regardless, those that did trudge through the snow and show up were dressed for the occasion (for the most part), as the photographic evidence shows (or doesn’t). 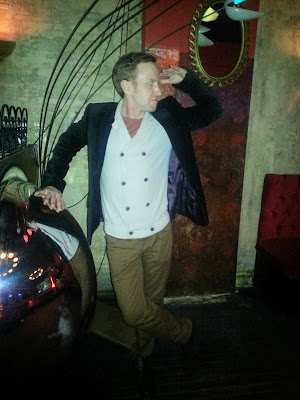 Myself, dressed to impress.

I personally was looking forward to the time warp back to the Dean Martin days and took full advantage of the opportunity to sleaze it up. I even wore these dandy socks which my mom so excellently surprised me with earlier in the day. 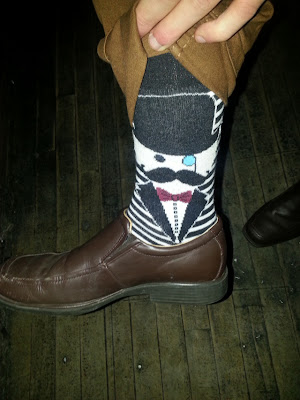 Yes, I am 26 and my mom still buys most of my clothes, but would you complain? No. Just look at those socks! They were extremely appropriate for being in the company of stars such as Dean Martin… 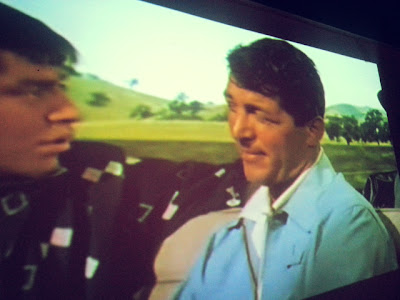 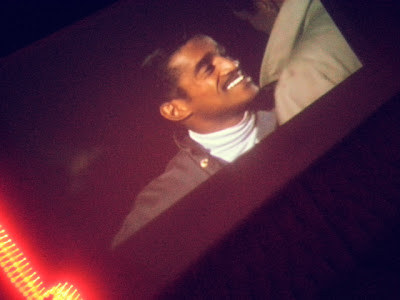 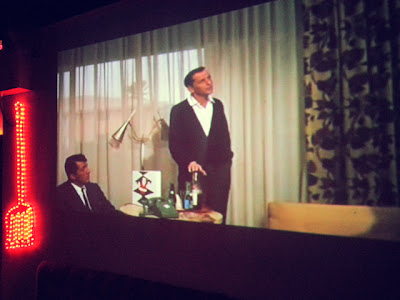 …and the incomparable Brock Johnson. 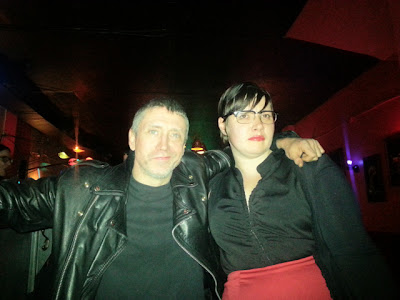 Overall, looking back, I didn’t actually learn much of anything at “Dean Martin’s Drinking School” last night. I did, however, have fun, and that is (at least) half the battle. Assuredly, as these educational sessions continue throughout the year (and fall on nights when the weather isn’t so arctic), more and more people will enroll in this crash course in “swinging bachelor pad sleaze.” Personally, I’m pleased with my decision to enroll and am glad to be sharing my experience with you. I recommend that you join me at the next snazzy session on the first Thursday of every month. A drink with ol’ Deano can’t hurt and you might even learn something along the way (doubtful). Now, it’s time to change out of last night’s clothes, including these dandy socks. Until next time, that’s amore’.