Mr Martin had the quintessential Italian looks and swagger....

Likes this post is definitely definitely in the category of amore, as "scousegirl" pontificates..."Confident, charming and funny with those hot Italian features, what we think about Mr Martin in his heyday, now that is most definitely ‘Amore’" Very very cool that in this very very special month of accentin' Dino-amore that likes this cool chick is spreadin' some Dino-love 'round the beefcake pad.

ilovedinomartin shouts out our amorin' thanks to "scousegirl" for such lovin' letters of Dino-appreciato. To checks this out in it's original format, likes clicks on the tag of this here Dino-message. Dino-lovin' and Dino-loved, DMP 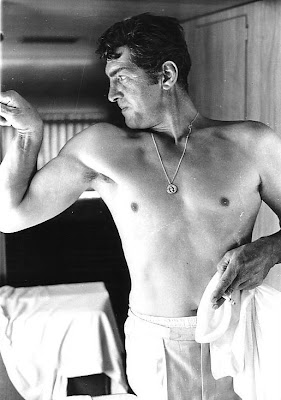 Mr Martin had the quintessential Italian looks and swagger, having origins in that country on both sides of his family. Dean himself was born Dino Paul Crocetti in Ohio and grew up to be the super smooth comic and singer who men wanted to be and women just wanted. He was the epitome of cool and the Vegas Strip came alive in the 1950s and 1960s when Mr Martin and the other members of ‘The Rat Pack’ (Frank Sinatra, Peter Lawford, Joey Bishop, and Sammy Davis Jnr) were in town.

From his world-famous partnership with Jerry Lewis (one of the most celebrated comic collaborations ever on both stage and screen), to the iconic performances of ‘The Rat Pack’, and his own CBS variety show, Dean was a class act. Confident, charming and funny with those hot Italian features, what we think about Mr Martin in his heyday, now that is most definitely ‘Amore’

If you're going to copy someone's content wholesale, you could at least link back to the original: http://www.dailybeefcake.com/2013/02/01/dean-martin/

Dear Sir or Madam...you must of missed this part of the post..."To checks this out in it's original format, likes clicks on the tag of this here Dino-message." Indeed, if you click on the title of the post, you will find that it links back directly to your original posting. Sorry for any confusion.... And, I did try to leave you a message that I had reported your thoughts, but for some reason the message space would not work for me.