Hey pallies, likes as we head in to week duo of Dino-amore month here at ilovedinomartin, we goes over to Mr. Jeffery Wells' blog pad, "Hollywood Elsewhere," for a fun bit of Dino-devoted lovin'. Under the tag, "Booze & Broads," which we knows were both huge on our Dino's list, Mr. Wells shares how a pallie of his sent him some Dino-love via some very very cool T-shirts with the logo image of our Dino and his fab restaurant "Dino's Lodge" on 'em.

Likes what an outstandin' way of proclaimin' your amore of our Dino...by wearin' him on your chest! What a wonderful way of sharin' Dino-devotion by giftin' 'nother pallie with Dino-apparel. Likes gotta 'fess up that I woulda loves to have one of dem for my very very Dino-own!

ilovedinomartin thanks Mr. Jeffery Wells for sharin' his special Dino-gifts with his readership. To checks this out in it's original format, simply clicks on the tag of this here Dino-postin'. Dino-desirin', DMP

A friend made these and sent a few over. He knows I'm grateful but I'll say it anyway -- thanks! I have an idea that less than five people in the world own this T-shirt, and maybe less than two or three. I also have an idea that Glenn Kenny (a fan of Nick Tosches' "Dino: Living High in the Dirty Business of Dreams") would like to own one. 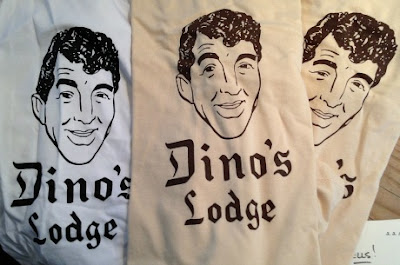