However, there is great pleasure in seeing Martin playing a role of depth and complexity.

Hey pallies, likes today it is the extreme pleasure of ilovedinomartin to return to the really classy classic movie blog, "CINEMA RETRO," where a pallie tagged Lee Pfeiffer has scribed an intriguin'ly insightful review of recently-released-to-DVD Dino-classic, "Mr. Ricco." As all you Dino-holics knows this is one of our great man's most overlooked big screen efforts, and indeed his last major starrin' role behind the cameras.

Mr. Pfeiffer's review is all too brief in words, but likes so so wonderfully wise in it's deepest of deep devotion to our most beloved Dino. Likes ilovedinomartin certainly encourages you to delve deeply into Lee's reflections, but here are a couple of his very insightful thoughts that I want to make sure to lift up in these here Dino-comments:

" However, there is great pleasure in seeing Martin playing a role of depth and complexity."

"I liked Mr. Ricco more than I anticipated. Martin fans will want to sample this entertaining footnote in his remarkable career."

It appears that Mr. Lee Pfeiffer is one of those folks who truly "gets Martin" and desires that others would make great effort to view our great man in his extraordinary performance in "Mr. Ricco."

ilovedinomartin thanks the pallies at "CINEMA RETRO" and Mr. Pfeiffer in particular for sharin' such a favorable review of our Dino in "Mr. Ricco" with their readership. To view this in it's original format, simply click on the tag of this Dino-report. Keeps lovin' our most beloved Dino pallies! Dino-awed, DMP 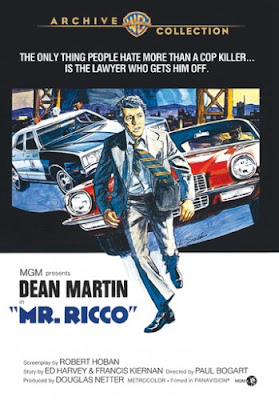 The Warner Archive has released the little-seen, little-remembered 1975 crime thriller Mr. Ricco as a burn to order title. The film is notable primarily for being Dean Martin's last starring role. (He would only be on the big screen twice more in extended cameos for the Cannonball Run films). The MGM production is set in 1975 and finds Martin as a high-powered defense lawyer who helps his client- a black militant (Thalmus Rasulala) - beat a murder rap. Shortly thereafter, Ricco inexplicably finds that an assassin is stalking him and there are several attempts made on his life. Circumstantial evidence points to his militant ex-client, but Ricco can't imagine why this man has marked him for murder. The plot takes a few clever twists in what is otherwise a relatively undistinguished, low-key crime drama. However, there is great pleasure in seeing Martin playing a role of depth and complexity. Ricco is unlike most other parts Martin had been gliding through on automatic pilot for many years. He occasionally seemed to awaken from his predictable patterns and give an impressive performance. This is one such occasion. This time around there are no home bars with endless drinks, no circular water beds and no comely women who think he's a chick magnet. In fact, Ricco has only woman in his life and she's appropriately middle-aged. (Matt Helm would never approve). Furthermore, although Ricco can duke it out with the bad guys, the film's one fight sequence finds him on the short end of the conflict, a welcome and believable development. The film is ably directed by Paul Bogart and moves at a brisk clip, utilizing the San Francisco locations in an effective way. A climactic shootout in a posh art museum is especially well-staged, as is the relatively downbeat ending. There are some popular TV actors in supporting roles: Denise Nicholas (Room 222), pre-Laverne and Shirley Cindy Williams and Philip Michael Thomas (billed here as Philip Thomas, still years away from stardom on Miami Vice.)

Frank Sinatra once said of his adopted "brother", "Dean Martin does not like to work." Martin, like Sinatra,tired of the drudgery of making films and retired from the business to concentrate on crooning. One can only wonder how many good performances he still had in him. Many of his films were disposable and forgettable, but they were always entertaining. I liked Mr. Ricco more than I anticipated. Martin fans will want to sample this entertaining footnote in his remarkable career.

The DVD includes the original trailer.
Posted by dino martin peters at 7:08 AM

Watched the entire film on-line, thanks to our incredibly cool blog host, and thought it was a great last performance from Dean. Def worth watching twice!

Hey pallie, likes glad you got the chance to view this unique and unusual Dino-performance. Keeps lovin' our Dino!