Dino, of course, is Dino.

Hey pallies, likes true to his Dino-word, our great pallie Mr. Ryan Ebelt has continued his reviews of our Dino as spyster Matt Helm . From Ry's outstandin' blog, "RJE's Friends of Junior," comes his most intriguin' insights on Helmer numero tres, "The Ambushers." And Ry's remarkable remarks, as always, are right on the Dino-money.

For most of us Dino-lovers, "The Ambushers" is the least of quartet, and Ebelt's wise words say it all, "Third movies usually tend to be a let down, especially if the second movie outdid the first." And, of course this is simply and purely the Dino-truth for "The Ambushers." Truly, truly numero duo, "Murders' Row" is the bestest of the best.

Ry sums up his Dino-assessment with the ultra ubber Dino-truth, "Dino, of course, is Dino." And, on the whole Ry ponticates, "In all, The Ambushers isn't a terrible entry into the series, but the magic has definitely faded." Likes, of course, what truly makes "The Ambushers" a pleasurable view is 'cause Dino is present.

Wanna encourage all youse pallies to takes the time to read each and every groovy thought that our great pallie Ry 'xpresses on "The Ambushers." Gotta tells you dudes, it's a great read! Hats off to our pallie Mr. Ry Ebelt for continuin' his excellent series of reviews of the Helmer classics. Likes can't wait to gets my eyes of his comin' review of "The Wrecking Crew." To checks this out in it's original format, simply clicks on the tag of this Dino-scribin'. Dino-always, ever, and only, DMP

"What's the Matter with a Broad in Daylight?" 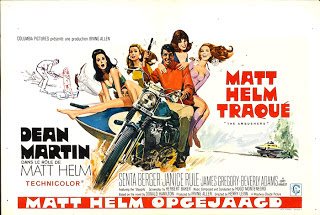 The movie poster: the only place where they toned down the innuendo.

Careful what you wish for, as the saying goes.

Last time we visited the Dean Martin series of Matt Helm Movies with 1966's Murderer's Row, I complained that the lack of coherent plot spoiled some of the fun. 1967's The Ambushers definitely managed to fill some of the plot holes (though the story is just as ridiculous as ever, which is a good thing), but managed to lose some of the fun in the process. 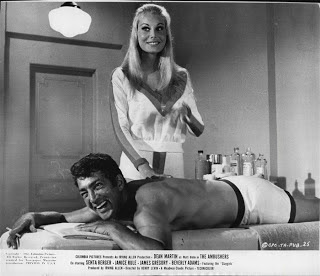 Don't get me wrong. The filmmakers piled on even more girls and even weirder gadgets, and the innuendo continued to flow fast and furious. This time, however, it just didn't seem to be as much fun as the previous two outings. I suppose it's the curse of second sequels. Third movies usually tend to be a let down, especially if the second movie outdid the first. Superman III (1983) immediately jumps to mind, although re-watching the second Superman movie showed that the bar wasn't necessarily that high. Rocky III. The confusion that was the third Pirates of the Caribbean movie. The palpable letdown of the third Nolan-helmed Batman. Usually, it's an attitude of keep everything the same while trying to pile on more of what everyone's supposed to love about it, which often results in a semi-stale "here we go again" feeling. 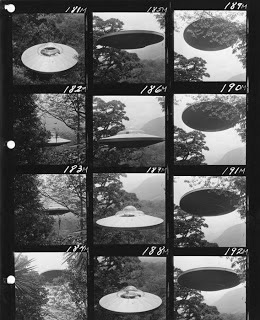 "The propulsion, gentlemen, is a crane and a series of wires..."

The third Matt Helm movie opens with the launch of a new American flying saucer that's pulled from the sky by a powerful electro-magnet (read: model truck that shoots sparks). We find Dino training female cadets at I.C.E (Intelligence and Counter Espionage) HQ when he runs into Sheila Sommers, the pilot of the saucer, who escaped her captors but has been rendered insane. Matt is assigned to find out who drove Sheila crazy and to find the missing saucer. This takes him below the border to a brewery in Acapulco which puts him on the trail of Jose Ortega, the exiled ruler of an outlaw nation. 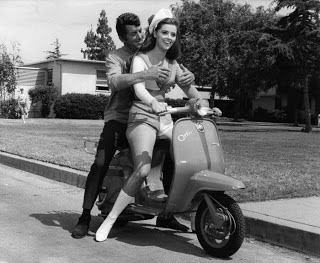 Insert your own "air-bags" joke here

Like I said: The Ambushers piles on the girls. Lots and lots of girls. But while eye candy is always nice, the movie's slow to start and much of the innuendo starts to get forced. Janice Rule's fine as Sheila Sommers, but the abused and mentally damaged character feels heavy in what's been a farcical series so far. She doesn't quite fit in with the fast quipping Dino in the same way that Stella Stevens or Ann-Margaret did in the previous movies. Senta Berger fares better as the femme fatale, but never seems all that involved in the story and functions largely as a way to wedge the arch-villain operation of Big O into the story.

The special effects are particularly laughable this time around, but it probably would've been less fun had they been good. The visible wires, rotoscoped glows, and laser guns that shoot sparks add to the charm. And though there's only a few scenes this time around that stretch suspension of disbelief to the breaking point, the addition of at least some logic still can't keep this from feeling a little stilted.

Hey Dino, Smokey the Bear would like a word with you about forest fires. Dino, of course, is Dino. And while he's comfortable and cool in the role of Helm, even he seems like his mind might be somewhere else.

In all, The Ambushers isn't a terrible entry into the series, but the magic has definitely faded.

However, the last Helm movie, The Wrecking Crew (1968) faced the most dangerous foe of all: A Change of Direction!