Benny was a one-time client, part-time assistant, and full-time needy little man with a big obsession for Dean Martin. 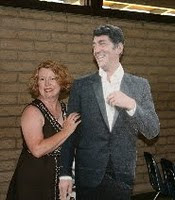 Hey pallies, likes it's been too too long since ilovedinomartin has showcased the creative writin' talents of one of our Dino's most devoted devotees. So, it is so so thrillin' to have found the google pallies sharin' a Dino-lert directin' to Miss Gayle Carline's literary blog, "On the edge of the chair of literature."

Well, Miss Carline has posted a short excerpt from what will be her third volume in the Peri series. As Miss Gayle describes the prose below, "This is from the second chapter of the third, untitled, unedited, mystery." And, likes I am delighted to see that indeed, again, this tome is gonna likes be Benny-centric, and thus Dino-centric....in fact as you will read, the plot of number tres is likes gonna be likes puttin' the accent on Dino-phile Benny.

ilovedinomartin is thrilled to offer you this first installment of Miss Gayle's new volume...just readin' the wee words below has me waitin' with bated breath cravin' the full tome of Dino-devotee Benny's adventures. Kudos to our Miss Gayle Carline for findin' such a extraordinary cool cool way of liftin' up the name of our most beloved Dino and bringin' more and more pallies likes into the Dino-fold. To view this in it's original format at Miss Gayle's, simply clicks on the tag of this Dino-message. Keeps lovin' our Dino! Dino-psyched, DMP


This is from the second chapter of the third, untitled, unedited, mystery.

* * *
The smell had hit her first, followed by the smoke. A private investigator's job is to be curious, so she loped toward the source, and saw fire engines pulling out of Angelina Drive, onto Morse. Two police cars were at the corner, officers directing traffic away from both streets. Fortunately, it was already mid-June, meaning the elementary school was out for the summer and keeping the police from having to re-route frazzled parents.


Now she stood and looked at the devastation. She wanted to cry, and it wasn't even her house.


It belonged to Benny Needles.


Benny was a one-time client, part-time assistant, and full-time needy little man with a big obsession for Dean Martin. He had spent the last couple of years running through his inheritance, stuffing his house with Dino items that he bought on eBay. Peri was never sure whether he was actually a hoarder. While his house was so full it was difficult to move around, it was full of specific things. Tables, chairs, sofas from the sets of Dean Martin movies littered the living room. Posters, and photographs, all signed, were on the walls, And then there were the tchotchkes – ashtrays, barware, even an ice cube tray that had been the center of Peri's first murder case.


She wanted to get a closer look at the damage, but she wasn't certain if the police would let her past the barricade. She knew almost everyone in the Placentia Police Department. Peering at all the uniforms, she was hoping to see someone who didn't just view her as an over-snoopy private investigator.


All I can do is try, she thought. The worst they can do is say no.


The tall blonde adjusted her ball cap over her ponytail and approached the officers. She spotted Officer Chou on his phone. He was always very courteous. She caught his eye and he motioned her over.


"Hey, Peri," he said after he ended his call. "I was just calling Detective Carlton."


She smiled. If Chou couldn't let her pass, Skip Carlton might. For one thing, he was a reasonable man. For another, they had been dating for ten years. But why was he needed on the scene?


"House fire's not the problem. The body inside is." Officer Chou looked worried. "I'm assuming it's Benny."


"No." She shook her head. "I happen to know he's out of town this week. It's Dean Martin's birthday, and he went with Phil and Nancy Nickels to some town in Ohio. Dino's birthplace and all that."

Thank you so much for your kind words, Mr. Peters. I wasn't certain how my Benny-followers (and Dino-philes) would take to Benny's house burning. You can bet that Benny doesn't take it well. As you can see, Miss Peri has still not come up to speed on all things Dean Martin, but perhaps Benny can educate her upon his return from Steubenville.

I plan to start the editing process in a week or so. The book will probably hit the shelves sometime within the next 6 months - I'd love to have it out by Christmas. In the meantime, stay as cool as Dino.

Hey pallie, likes thank you so much Miss Gayle...indeed I am sure that our Benny will do his best to instruct Peri in all thin's Dino...indeed it came as quite a shock to hear that many, if not all of our Benny's Dino-treasures have none up in smoke...but might I say a very cleaver plot twist, and a way to insure that your third tome will be Benny and Dino-centric. Hopes you gets your wish on the publication date so that many many Dino-holics can be gifted with this book. Keeps lovin' our Dino!