On Our Dino's Departure

Hey pallies, likes hopes all you pallies took the op to honor our most beloved Dino in your own special way yesterday on Dino-winter-day. As we continue to pay homage to our Dino in these closin' days of Dino-winter-month, today we turn to a brief Dino-postin' at the blog "mysack.com" where the pallies there have listed important events in music history for December 25th.

Even though this Dino-mention is brief in nature, and even though I have spotted at least one error in the Dino-information (our Dino's stellar Dino-show ran for 9-count-em-9 seasons on the Peacock Network), one never knows how such Dino-homagin' will help to bring others into the Dino-fold! So, ilovedinomartin sez our thanks to the dudes at "mysack.com" for sharin' this information on the day of our Dino's departure from our planet. To views this in it's original format, just likes clicks on the tag of this Dino-gram.

Keeps lovin' our Dino pallies and keeps tuned to ilovedinomartin for even deeper Dino-devotion to come! Dino-passionately, DMP 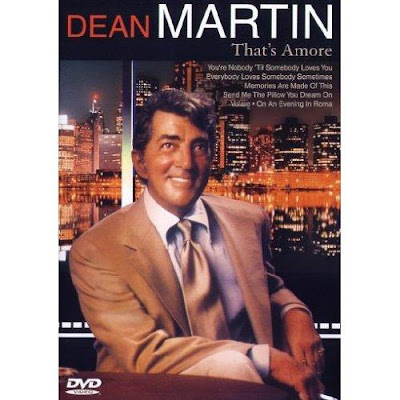 In 1995, singer-actor Dean Martin died of respiratory failure at his Beverly Hills, California home. He was 78. Martin first gained fame in a comedy duo with Jerry Lewis in the late 1940's. They were top movie, T.V. and nightclub stars when Martin ended the act in 1956. He went on to further stardom on his own, both as an actor and singer. Martin's movies included "The Young Lions," "Some Came Running" and the Matt Helm series. His TV variety show ran for eight years on N.B.C., beginning in 1965. And on record, Martin's smooth baritone made number-one hits out of "Memories Are Made of This" in 1956 and "Everybody Loves Somebody" in 1964.
Posted by dino martin peters at 5:33 AM