Hey pallies, Likes the days of our Dino-winter-day remembrance are windin' down as we are now at the twenty-eighth day of Dino-winter month. Today we return to the blog, "classicmoviechat.com," where on December 10 we reported that bloggers Mr. Joe Morella and Mr. Frank Segers asked the provocative Dino-quire, "Was Dean Martin a Movie Star or a TV Star?" Faithful ilovedinomartin readers will remember that Joe and Frank correctly answered both and went on to share a stunnin' pix of our Dino on the set of "Texas Across The River."

Well, likes as I most often do when sharin' other pallies' Dino-reflections, I offered a bit of Dino-patter in the comments section thankin' these dudes for their Dino-reflections and tellin' 'em that they were bein' featured at this here humble little Dino-blog.

To my total total Dino-delight I discovered that Morella and Segers featured my Dino-devotion in a recent post at "classicmoviechat.com" puttin' the accent on comments received on their original Dino-post. And, to make thin's even Dino-sweeter, it would appear that my Dino-thoughts have encouraged this dudes to delve deeper into our most beloved Dino sayin'.... "But what we may have overlooked Is Martin’s “coolness” factor.

Likes this flick lovin- guys then goes on to share my Dino-thoughts as you can read below. Can't tell you likes how delighted I am to know that perhaps, just perhaps the efforts of ilovedinomartin to lift up the life, times, and teachin's of our most beloved Dino sometimes indeed is helpin' others to grow in knowin', lovin', and honorin' our great man!

Thanks to Mr. Joe Morella and Mr. Frank Segers for sharin' this Dino-holic's thoughts as a featured blog post and for growin' in knowin' the importance of our Dino's cool quotient! Dino-passionately, DMP 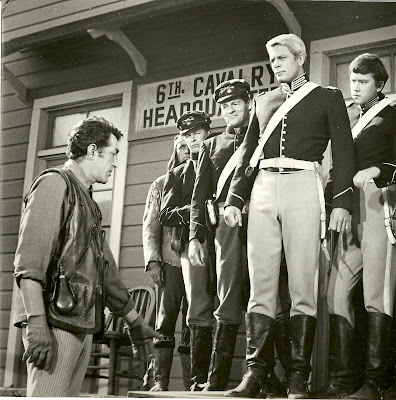 Hello, everybody. Joe Morella and Frank Segers, your classic movie guys, here today to enjoy the entertaining responses we received to our Dec. 8 blog that asked the pressing question, Was Dean Martin a Movie Star or a TV Star?

Our answer was that he was both. And we certainly stick by that! But what we may have overlooked Is Martin’s “coolness” factor.

Whatever you thought of his merits as an actor (disclosure: Frank is a lot less enthusiastic than Joe), Martin was one cool dude. With or without Sinatra and the Rat Pack, el Dino was as smooth a vocalist as he was an operator.

That certainly is the view of reader Dino Martin Peters, who emailed on Dec. 10:

Hey pallies, likes what a totally totally provocative Dino-quire and stunnin’ Dino-reflection! Never was, never will be anyone as cool as the King of Cool…oh, to return to the days when Dino walked the earth!

Knows your Dino-prose is bein’ shared this day with the ilovedinomartin readership.

Gosh, Martin STILL commands such a rapturous following! We suspect that is a lot more than can be said for Jerry Lewis. Thanks Dino, and we are glad you so enjoyed our blog.

In our Dec. 8 piece, we ran a photo (see above) of Martin starring (more or less as a goof, we suspect) in Texas Across The River. Its is totally forgettable comedy/western made in 1966, in which Martin’s eclectic costars include French actor Alain Delon and our mystery gent (we asked that you identify him) who played the ‘Indian’ (see above).

Peter Graves, the younger brother of “Gunsmoke’s” James Arness, was also in the picture, playing one Captain Rodney Stimson, and given to delivering such lines as “Take it easy, Yancy. You got a wedding to go to.”

In any case, who was the guy playing “the Indian.”

Reader Gerri had the correct answer: Is that “Indian” Joey Bishop??? What a riot!

It was indeed Joey Bishop, playing an Indian by the name of “Kronk.” Talk about casting against type. Bishop was many things but never an Indian. He was Jewish, born Joseph Abraham Gottlieb in the Bronx in 1918. (He died in 2007 at the age of 89.)

Bishop made a fair number of movies but was most popular as a TV show personality. He was also, along with Martin, a certified member of Frank Sinatra’s Las Vegas-based Rat Pack, and costarred with fellow packers in their signature movie, Ocean’s Eleven in 1960.

Indeed, what a riot!
Posted by dino martin peters at 7:16 AM

Martin STILL commands such a rapturous following! We suspect that is a lot more than can be said for Jerry Lewis.

That second sentence is definitely a true statement!

Jerry Lewis's book about his working with our Dino is a great read -- probably Lewis's most popular endeavor in quite a while.

Hey pallie, likes Miss AOW, I know that I have shared this here before, but I gained so much more respect for Mr. Lewis after I read his amore of our Dino...truly Lewis always has and always will love our most beloved Dino. Keeps lovin' our Dino!