Hey pallies, likes today's Dino-post woulda be coolest to share on our Dino's birthday, but likes that is month 'way and likes can't waits that long to share this ultra-swank Dino-find..but likes maybe will repeat this one next June 7th.

From the blog pad, "Bertram Potts, Moritmer Brewster & Other People Of Great Importance,"...likes digg that tag dudes!....comes this choice bit of Dino-history.
Seems that on our Dino's 44th date of birth, June 7, 1961, some of his best pallies threw a birthday bash for him at the Sands in 'Vegas baby 'Vegas.

All the groovy Dino-details are below....a very cool cool Dino-report includin' the fact that our most beloved Dino was served "an enormous birthday cake shaped like a bottle of scotch." Likes how totally totally Dino-rad is that!

Thanks to pallies Bert and Morty for sharin' this stellarly stunnin' tid bit of Dino-history with all their blog readers. To view this in it's original format, likes clicks on the tag of this Dino-gram. Dino-grooved, DMP 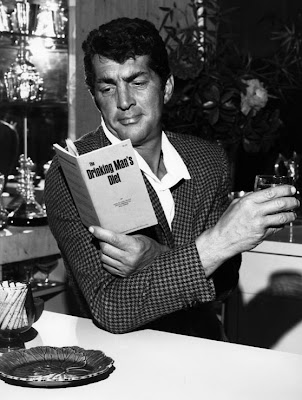 Dean Martin was given a surprise party for his 44th birthday at the Sands Hotel in Las Vegas. Unfortunately it didn’t end up being a surprise though because he showed up early! The highlights of the party were actor Peter Lawford playing waiter, Eddie Fisher singing a special song, “I Love Dino But Not Like My Liz,” and an enormous birthday cake shaped like a bottle of scotch. The guest list included Frank Sinatra, Sammy Davis Jr, Joey Bishop, Vic Damone, Marilyn Monroe, and Elizabeth Taylor.