Do you feel Italian, Dino, or don’t you?

Hey pallies, likes yester-Dino-day we learned 'bout our "voice of reason" Dino, while today we hear a retellin' of a time when our Dino was not so so mild mannered.
I felt so Dino-led to a self-tagged blog, "Andrea Stern," where Miss Andrea has reprinted a bit of a question-answer session with our Dino from a 1967 edition of L’Europeo magazine, reprinted in The Limelighters.

The quire put before our Dino was..."Do you feel Italian, Dino, or don’t you?" And, our most beloved Dino responds by sayin', "I’ll tell you how much I feel Italian."
Dino then goes out to pontificate on how he and Sinatra had at a couple of dudes who called 'em Dagos, as well as a time when he defended his daddy-o from dissers 'bout his father's broken English.

In these Dino-revelations we see our Dino as a man of valor, integrity, and quick action....usin' his might to defend his Italiano roots. When it called for it, our Dino was not afraid to use his fists to uphold his deep seated values. How wonderful to read these true-to-life Dino-reports. 'gain likes just makes me respect our great man all the more!

ilovedinomartin is delighted to say our thanks to Miss Andrea Stern for reportin' this revelin' Dino-details. The more and more I learn 'bout the life and times of our Dino, the more in awe I am of how he lived his life always always on his own terms. To view this in it's original format, likes clicks on the tag of these here Dino-thoughts. With the deepest of Dino-respect, DMP 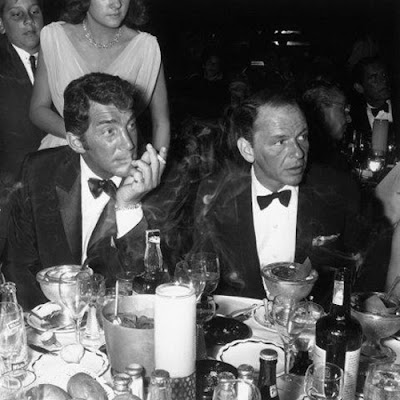 Martin: “I’ll tell you how much I feel Italian. Three years ago, on my birthday, Frank [Sinatra] and I were at the Polo Lounge over there. We were with six other people, minding our own business, and we were a little loud. When we were goin’ out the door, there are a couple of guys, and one of ‘em says, “There goes the two loud Dagos.” Well, Frank got there one split second ahead of me, and he hit one guy, I hit the other,and we picked ‘em up and threw ‘em against the wall. The cops came. We said we didn’t know who did it and walked out. But we did, yeah.

And I did, another time. When my father talked broken English, a couple of people said something. I picked ‘em right up and said, “You aren’t going to say something about a guy who can’t talk English well because he’s been a barber all his life on thirty dollars a week.” When that happens, I just hit ‘em and throw ‘em out, wherever I am. In the past, I’ve been rejected by a lot of prominent people who say, “Well, he’s Italian.”

But I would always punch the guy right on the mouth for this. Even when I was working onstage, and somebody would say “Dago” or “greaseball”, I would jump right on the table – which is why I couldn’t get a lot of jobs: they’d say, “He’s a hotheaded Italian.”

The only one who can call me Dago is Frank. I call him Dago, too. With anybody else, there’s a fight, ‘cause I never call anybody Chinaman or Jew, so why should they say that to me?”

-1967, L’Europeo magazine (reprinted in The Limelighters)
Posted by dino martin peters at 7:08 AM