Our Dino and Dino Jr. in "Murders' Row" 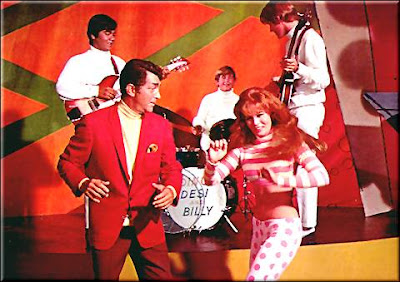 It that clip when our Dino as Matt Helm is makin' the discotheque scene with Suzie Solaris and as they are fruggin' Suzie (Miss Ann Margret" backs our Dino up to his boypallie Dino Jr. singin' "If You're Thinkin' What I'm Thinkin'" with his band, "Dino, Desi, and Billy."

This is the one and only scene that our Dino and Dino Jr. share in a flick...and likes it is so so very cool seenin' our King of Cool and the heir apparent to our Dino's throne makin' such groovy patter together...it certainly was a precursor of things hoped to come between the Martin boys, but alas it was not to be.

Here is the whole clip, but to catch the Dino-action between father and son, goes to 'bout 3:05 in the action. Dino-honorin', DMP

This is my number one Matt Helm movie.
So far I watched it twice, I didnt know the teenager in the group was Dinos son till I saw this.
The saying Dean has in the movie, Its a wise father who knows his own son makes sense now

Hey pallie, Deanager Shaun likes cool that we are likes in total Dino-agreement on this bein' likes the numero uno Matt Helm caper...it's our Dino at his Dino-ist...oh so cool, hip, and likes every randy...glads that ilovedinomartin coulda add a bit to likes your Dino-edification Shaun dude...thanks for droppin' some Dino-patter man...likes cool top hear from someone growin' leaps and bounds in our Dino...

This is my favourite scene from Murderers Row and I have several favourites.
I have a cd of Dino, Desi and Billy, I`m not really into their music but this song is the best track on the cd.
Some great joking between Dean and his son in this scene :)
Hugs n Kisses
from Kylie xxxoooxxx

Hey pallie, how very cool that we are likes on the same Dino-page on this clip...and likes you I have many fav scenes from MR...my all-time Dino-fav of our Dino's flicks....indeed our Dino did more important movies, but to likes me this is no better big screen epic that shows our Dino bein' more Dino-ish then MR....thanks for droppin' some Dino-patter Miss Ky....