Hey pallies, likes every Dino-day I loves to proclaim the Dino-message of cool here at ilovedinomartin and likes I gets so delighted when our Dino leads me to 'nother dude who is proclaimin' Dino-cool as well. Today's Dino-gram originates from a pad tagged "Notice Of Meowery" and the pen of Mr. John A. McKeon.

Mr. McKeon, who obviously loves our Dino, shares his review of our great man's amore to music south of the Mason-Dixon line. John hates the cover, but loves the Dino-tunes. And, likes I gotta agrees with our pallie on both points. As McKeon sez, the cover "makes Dean Martin look like a douche, and in real life he never looked that goofy." John is 100% correct, our King of Cool woulda never look goofy in real life. As McKeon ponders, likes it woulda be very interestin' to know the history of this cover.

When it comes to the music, as our pallies pontificates, "the guy absolutely nails it." And, of course our Dino does....no matter what sorta tune he croons, our Dino always "nails it" in true Dino-perfection.

Likes pallies, it is always so excitin' to experience more Dino-love on the 'net and certainly John McKeon review of "Swingin' Down Under" exudes true, pure, and deep Dino-devotion. So, ilovdinomartin sez our thanks to Mr. John McKeon for openly and unabashedly speakin' the Dino-truth and helpin' his readers to know more 'bout the pleasures of Dino.

To view this at John's pad, likes just clicks on the tag of this Dino-post, and likes John man, if likes you reads this dude, likes what's the tagg of your pad "Notice of Meowery" all 'bout man? with Dino-deep Dino-appreciato, DMP 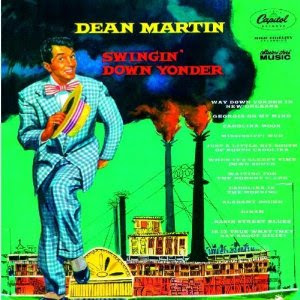 First thing’s first here: this cover sucks. I seriously think it might be one of the worst album covers ever made, mainly because it makes Dean Martin look like a douche, and in real life he never looked that goofy. They’ve got him dressed up in some lame outfit and on top of it whoever created this is making look like he’s dancing a jig. It’s just horrible. I keep wondering if Dean had to sign off on this cover or if it was just something the record company pushed through. The thing is I’m convinced that if they had used a photograph instead of a drawing he could have pulled it off. Don’t believe me? Check out how cool the guy looks for his country album: 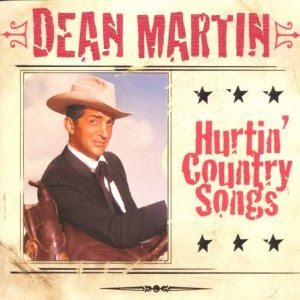 Okay so enough about the cover. The concept of Swingin’ Down Yonder is that Dean is doing songs associated with the American south. It’s such a bizarre release from someone associated with Italian love songs, but the guy absolutely nails it. The songs are lighthearted without being silly and it doesn’t contain a single moment where you roll your eyes in embarassment. The music is created by traditional instruments instead of Dino’s usual orchestral music and his voice blends with it perfectly. The only complaint I have is with the bonus tracks included on the re-release that I have; they don’t fit in with the concept and it’s a little jarring when they start, but really that’s a small quibble.

There are a lot of good Dean Martin albums but I would rank this among my top two or three studio albums. Despite the terrible cover and the odd concept this is a great display of his talent.
Posted by dino martin peters at 7:12 AM

I have the original vinyl and cover for "Swingin' Down Yonder." Classy and appropriate.

I fail to understand why these new covers can be so bizarre. Sheesh.

Hey pallie, likes how cool Miss AOW that you have that particular Dino-treasure in your Dino-collection...and likes I am in total agreement on your thoughts..
" fail to understand why these new covers can be so bizarre. Sheesh." All the Dino-best to you and Mr. AOW as the holidays approacheth....