Hey pallies, always loves so much when I find 'nother dude who has discovered the exteme pleasures of our Dino playin' Matt Helm. Today's Dino-gram features a review of "The Silencers" done by a guy named Stu at his blog "Snubian." To checks this out in it's original format, just click on the title of this post.

By readin' some blog posts I was able to figure out that Mr. Stu is an Aussie from down under....there are huge numbers of Dino-holics that hail from the land of kangeroos. Loves this guy's Dino-perspective....as he states..."Apparently it was a condition of Dino’s contract that alcohol not only be constantly available on set, but that every scene in the film include an open bottle of booze...."

Mr. Stu has also shared a couple of classic Dino-pixs from the flick as well. So thanks to Aussie Stu for liftin' up the name of our Dino and sharin' his pleasureable experience viewin' "The Silencers." Dino-sharin', DMP

If there’s one thing I learnt from watching our most recent Sunday Night Classic Movie, The Silencers, it’s that Dean Martin loved a drink. Apparently it was a condition of Dino’s contract that alcohol not only be constantly available on set, but that every scene in the film include an open bottle of booze, even when he’s tooling through the desert in his quite amazing 1965 Mercury Colony Park station wagon: 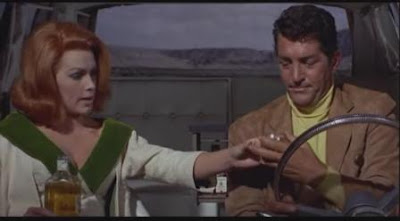 That’s a well-stocked travel bar you can see peeking out from behind the driver’s seat as our male lead accepts a glass from his female companion. One for the road, Dino?

The Silencers, released in 1966, is a tongue-in-cheek spy romp based on a novel by Donald Hamilton. Responding to the James Bond craze then sweeping the world, The Silencers was the first of four films to feature crooning “Rat Pack” alumnus Dean Martin as government agent Matt Helm.

The plot, such as it is, revolves around an evil individual called “Big O” (or perhaps it’s an organisation, it’s hard to tell) who plans to divert an American nuclear test missile so that it crashes back into a large underground cache of other nuclear weapons. Helm is called out of retirement to put a stop to this, with the resulting course of events often totally mystifying.

For some reason Helm keeps finding beautiful women in his bedroom, or in his car, or in other places. One beautiful woman tells him something about a mysterious “computer tape”, crucial to Big O’s plan. Helm drives to a desert resort hotel, the location for the drop-off of the tape to a Big O henchman. While watching a semi-erotic dance routine in the hotel lounge, Helm somehow ends up in the company of another beautiful woman, who through a strange and unfathomable series of events has acquired the tape. The pair take off into the desert in his enormous station wagon, stopping overnight in a swamp where the car converts magically into a swanky bachelor pad. Here’s Dino in the back, assisting his friend with the removal of her wet clothes: 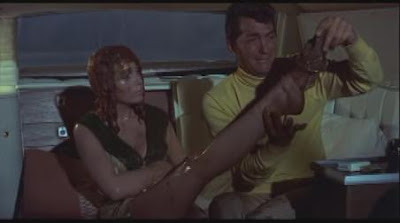 The plot doesn’t really go anywhere after that. Helm saves the world in the end of course, by diverting the missile into Big O’s own headquarters. On the way he meets a variety of strange characters, most of whom he kills, including one old guy who wanders around draped in an electric blanket. Of more interest than the plot are the hilarious props: a circular bed that moves across the floor and tilts to 90 degrees, bath robes that descend from the ceiling, some sort of automatic towel system, a gun that fires backwards into the stomach of the unwitting shooter.

Dean Martin was in his late forties, and already a hugely famous singer and actor, when The Silencers was made. He had been playing nightclubs for decades, and was a legendary boozer. The cracks are beginning to show by 1966. Dino’s face is leathery and coarse. He sweats 100% alcohol. His lower lip is permanently creased from contact with glass. He sways and slurs his way from one scene to the next, delivering his lines with almost no inflection or nuance. At times his leading ladies seemed almost repulsed to be kissing him.

Nevertheless, The Silencers comes highly recommended by me. It’s truly hysterical from start to finish. Do yourself a favour and track down a copy.

I personally love this Matt Helm flick more then other 3! It´s so much fun, and Dean is soo dreamy in it!

Hey pallie, yeah our Dino is so so cool, hip, and ever randy in "The Silencers," buts I still grooves on "Murder's Row" even more....