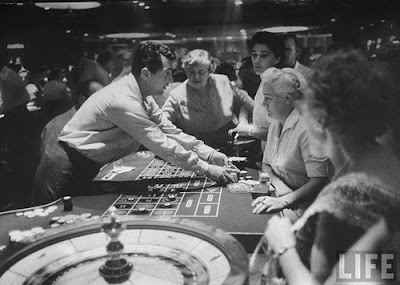 Hey pallies, a few ago I posted a vid and commentary 'bout a pallie winnin' big with the Dino-slot-machine. I promised to share more of those vids with you and today is that Dino-day pallies! And, not only are you goin' to see a quartet of vids of the Dino-gamin'-unit in action, but I also found a little story of a chick named Susan who made it big with our Dino on one of those Dino-chines!

So, before the vids, we first visit the "Mary Liz Reads And Writes" blogg where none other the Miss Mary Liz shares the Dino-experience of her friend Susan while they were vacatin' in "Vegas. If you wanna read all 'bout these ladies' adventures in our Dino's playground you can just clicks on the tagg of this post to go directly to Miss Mary Liz's home base.

Loves how this Susan chick makes such a stellar Dino-proclamation....“I have no idea how I am winning, and don’t even know what to root for, but when Dino sings to me I know it’s good. Come on sing to me Dino.”

Knows if I ever does get to 'Vegas and I gets to do some gamin', I certainly will go directly to the Dino-chine and let's the Dino-magic happen! So enjoys Miss Susan's Dino-encounter and of course the youtube clips of the Dino-slot-machine in action. Dino-favorin', DMP

Susan opted to stay and play the machines. It turned out to be a good move. She and the Dean Martin penny machine made for a lucrative combo. She recouped her loss from a cancelled flight and another night at Caesar’s Palace, due to wind and rain in Phoenix. She made me laugh when she said,

“I have no idea how I am winning, and don’t even know what to root for, but when Dino sings to me I know it’s good. Come on sing to me Dino.”

Japp, now i am sure! I'v played one like that in the sin city last summer! Great game, i actually won 25 $!

Hey pallie, indeed our Dino is so good to his true Dino-devoted pallies....