You're Nobody Till Dean Martin Loves You 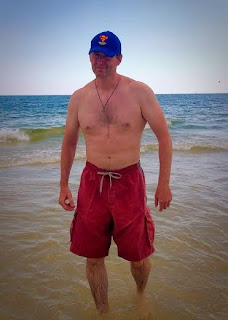 Hey pallies, likes today's Dino-gram  is makin' us turn shades of green with envy dudes!   The reasons youse quire?    Well, likes in doin' our usual 20 pages of google blog searchin' we happened 'pon this most unusually tagged blog pad, "Zombie Logic Press -  Poetry, web comics, zombie movie reviews, artwork, and commentary on politics, fantasy football, and modern culture by Outsider poet Thomas L. Vaultonburg."   And, when we arrived there we were smitten by the massive 'mount of Dino-treasure that Mr. Vaultonburg happen to stumble 'pon while perusin' merchandise at a Salvation Army Store.

In his tremendously, terrifically tagged post, "You're Nobody Till Dean Martin Loves You," that you will find below, Thomas shares discoverin'  "an enormous Dean Martin collection ---- Matt Helm movie posters, LP albums, framed artwork, and this box of 45's."  It's the sort of  motherload of Dino-treasure that each and every Dino-holic hopes to one day come 'cross at their local thrift shop.

It appears that the posters, al-b-ums, art work and such were "priced were above retail," but Vaultonburg was able to  snatch up 39 of the Dino 45's (all in original picture sleeves!) for just .35 each.  Now that's a real steal of a Dino-deal!   We couldn't 'gree more with Thomas when he sez, "
"These Dean Martin 45's are so cool I couldn't think of selling them, even though they're worth ten times what I paid for them."

Likes we only wishes that we had been the one to have stuck Dino-paydirt.  If we hadn't had the bread with us, we woulda quickly went home and broke into our piggybank and used our life's savin's to acquire as much of this Dino-find as we could for ourselves.

We salute Mr. Thomas Vaultonburg for his great good  fortune in comin' 'cross all this great great Dino-treasure and for sharin' his delight with his readership.  To checks this out in it's original format, simply clicks on the beginnin' words of today's post.     DMP

You're Nobody Till Dean Martin Loves You

I'm going to take a break from trying to sell our latest book, The Zen of Beard Trimming, and just write about these 40 Dean Martin 45's we found at The Salvation Army last night. To be precise, 39 Dean Martin 45's and one by Buck Owens. Apparently someone had amassed an enormous Dean Martin collection while they were alive, and someone else had decided it wasn't important enough to keep, sell, or pass on to someone who might have wanted it. They dropped it all off at The Salvation Army. Matt Helm movie posters, LP albums, framed artwork, and this box of 45's. The 45's were the only items that hadn't been priced yet, and roughly half of them were in the original picture sleeves. Since the items that already been priced were above retail, I didn't have much hope we'd be taking any of these home, but when the store manager came over frazzled and distracted, and said .35 cents each I knew we had stumbled into a little bit of good luck. So we picked out the 39 that were in picture sleeves, plus the Buck Owens "I Got a Tiger By the Tail/Crying Time" 45, and got out of there while the getting was good. 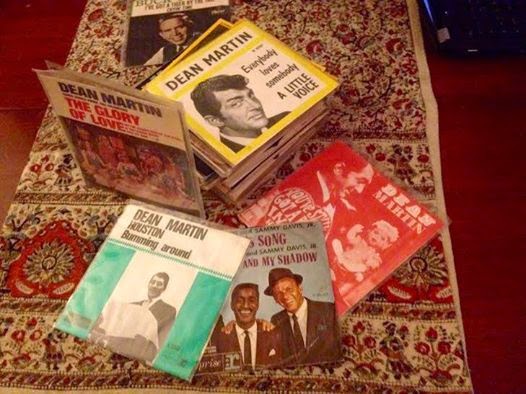 These Dean Martin 45's are so cool I couldn't think of selling them, even though they're worth ten times what I paid for them. Many are French or German imports, and almost all of them are in near mint condition. Will I ever play them on an actual phonograph? Probably not.
Posted by dino martin peters at 7:45 AM

A real treasure! I wish that I had a few of these.

Talk about hitting 'The Jackpot' - what an amazing find and collection of records. You just do not see things like this anymore.

Thank you for bringing this great find our way!

Hey pallie, likes Miss AOW...a treasure trove of Dino-delight for sure....guess we are more greedy then you...we woulda wants 'em all! How lucky coulda this guy be to have hit the Dino-motherload!
Keeps lovin' our most beloved Dino!

Hey pallie, likes Scotty-o...."The Jackpot" for sure. Indeed, this is a very very rare Dino-find and a steal of a Dino-deal! Keeps lovin' our most beloved Dino!

Hey pallie, likes Andrew thanks for chimin' in...always so so cool to hear from 'nother devotee of our Dino! And, likes dude you speaketh the Dino-truth....an incredible Dino-cache that we dream of gettin' our hands on. Long live Dino...and keeps lovin' our most beloved Dino!