...and Martin’s delivery is always impeccable.

Hey pallies, likes Dino-amore month keeps movin' 'long and today ilovedinomartin features the third helpin' of Helmer capers with our ever Dino-lovin' pallie "dfordoom's" prose on that best of best of the Matt Helm flicks, "Murders' Row".....second in the series of 4 Dino-efforts.

Somehow, someway, I missed readin' and sharin' this excellent Dino-prose when it was scribed months 'go, but am pumped to be able to share it with all youse Dino-philes now. From "dfordoom's" blog, "Cult Movie Reviews," comes 'nother insightful reflection of that swingin' of swingin' spyters Matt Helm.

Mr. "dfordoom" has many many fine remarks to share on "Murders' Row," includin'..... "This movie is actually not quite as campy as you might expect. It is definitely campy but it maintains a nice balance between the jokiness and the action." And, speakin' of our most beloved Dino...."Naturally much of the success of a tongue-in-cheek spy movie depends on having the right lead actor. Dean Martin does the job admirably. It’s an effortless, smooth and cleverly self-mocking performance. The movie is loaded with Dean Martin and Rat Pack in-jokes and Martin’s delivery is always impeccable."

"Effortless, smooth, clever, and impeccable"....truly words that describe our great man in a great great way. Obviously, "dfordoom" truly truly "gets Martin!" It is such a pleasure to share this wonderous and wise review with the ilovedinomartin readership. And, ilovedinomartin 'gain salutes "dfordoom" for educatin' his readership in the ultimate pleasures viewin' our Dino as Matt Helm. Likes to checks this out in it's original format, simply clicks on the tag of this Dino-gram. Dino-lovin', DMP 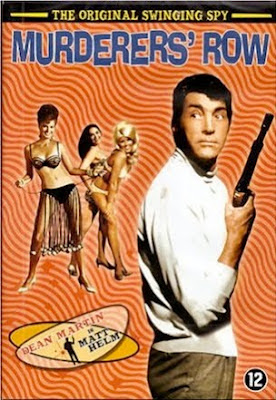 By the mid-60s everyone wanted to jump on the James Bond bandwagon. The folks at Columbia Pictures were no exception. What they came up with turned out to be among the most successful and among the best of the Bond rip-offs/spoofs - the Matt Helm series.

Murderers’ Row in 1966 was the second of the four films, all staring Dean Martin as super-cool super-spy Matt Helm.

This time around Matt is up against super-villain Julian Wall (Karl Malden) who has kidnapped an American scientist to get the plans for a high-powered death ray with which he intends to destroy Washington. Why does he want to destroy Washington? Because he’s a super-villain. But first he has to get the free world’s four top counter-espionage agents out of the way. Including Matt Helm. He appears to have succeeded, but Matt and his boss MacDonald (James Gregory) have concocted a plan to fake Matt’s death. 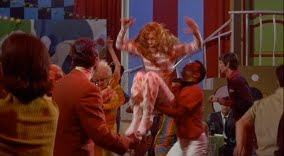 Needless to say the assassination plot involved a glamorous model, since Helm’s cover is that he is a top glamour photographer. Hanging around with beautiful half-clad women while taking photos and drinking lots of booze is a pretty easy cover for Matt Helm to maintain, especially when he’s played by Dean Martin. Miss January’s attempt to kill him misfires but having the arch-villain thinking he’s dead allows Matt to assume another cover and go snooping around Julian Wall’s private island.

Matt’s investigations lead him to more glamorous women, women like Suzie (Ann-Margret). That’s the great thing about being a top secret agent - plots by super-villains to Destroy Civilisation As We Know It invariably involve lots of glamorous women. Suzie turns out to be the daughter of the kidnaped scientist. She also proves to be a remarkably useful ally. Suzie is a Swinging 60s gal which gives the film-makers an ideal opportunity to throw in lots of scenes with far-out dancing in discotheques backed by groovy bands. It also provides the opportunity for Ann-Margret to wear some incredibly over-the-top 60s fashions. 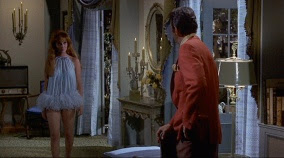 Of course there has to be beautiful but evil woman mixed up in the plot as well, in this case the woman being Coco Duquette (played by Camilla Sparv). And the diabolical criminal mastermind has to have a henchman, in this case a big mean guy with a very prominent metal plate in his head. 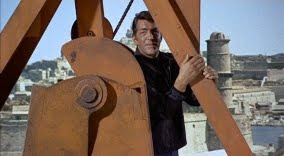 Luckily Matt has some secret weapons at his disposal. The gadgets are actually quite cool. Columbia had no intention of spending the kind of money that the Brits were spending on the Bond movies so the gadgets had to be the kind that are cool but won’t cost the studio much money. The ideal in this sort of situation is to come up with gadgets that are clever and witty and can be used as the basis for running gags as well as taking out bad guys. Murderers’ Row scores well in this department. The delayed action gun is my particular favourite.

This movie is actually not quite as campy as you might expect. It is definitely campy but it maintains a nice balance between the jokiness and the action. The hovercraft chase is a nice touch. Why hovercraft? Because no spy movie had featured a hovercraft chase prior to this, plus diabolical criminal masterminds love high-tech stuff that serves no purpose besides looking cool. It’s a taste I share. 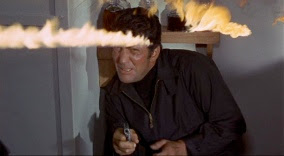 Naturally much of the success of a tongue-in-cheek spy movie depends on having the right lead actor. Dean Martin does the job admirably. It’s an effortless, smooth and cleverly self-mocking performance. The movie is loaded with Dean Martin and Rat Pack in-jokes and Martin’s delivery is always impeccable.

You also need a good villain. Karl Malden is not as memorable or as ostentatious as the best of the Bond villains but he’s quite adequate. In fact I quite like the idea of a diabolical criminal mastermind who looks like he might be an insurance salesman from Des Moines, apart from his desire to destroy whole cities. 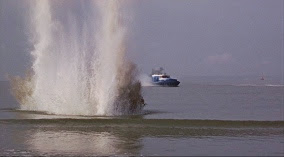 Ann-Margret is a terrific female lead. She’s ditzy and cute and outrageous but she’s also smart and resourceful. I like the fact that they didn’t try to make her a kickass female martial arts type heroine but she’s still able to save the day on several occasions. She uses her wits rather than action heroine skills but she’s clever enough to get the better of the bad guys.

It’s all non-stop fun and hugely enjoyable.
Posted by dino martin peters at 9:47 AM