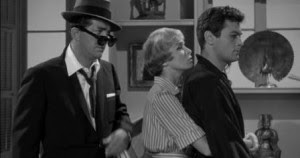 Hey pallies, likes it just doesn't get much better then this. The cool 'net pad Slate" has a cultural blog tagged "Brow Beat" where editor Mr. David Haglund holds forth. Well Haglund has a regular column tagged, "Did You See This?" where he shares cool stuff from the web that pallies likes us often just might miss.

Well recently, David found and posted a vid clip tagged "50 Years of Movie Shades" that first appeared at "Found Item Clothing." the vid is a absolutely fab collection of short clips of pallies in shades on the big screen for the past 50 years.

But, likes the coolest part of this whole homage is that the dudes who put together the film montage wisely chose to use our Dino croonin' his 1966 recordin' of "Shades" for the background music. While the vid is cool on it's own....it is likes totally perfected by havin' our Dino settin' the mood as only our most beloved Dino can!

Thanks to Mr. David Haglund of "Brow Beat" bringin' this to our Dino-attentionado and so that we coulda share it with all the Dino-philes here at ilovedinomartin. To view this in it's original format, just clicks on the tag of this here Dino-gram and to find the link to the original postin' at "Found Item Clothing" simple click on the youtube link on the vid and it will take you to youtube when you can catch the original link, which, btw, lists in order the flicks included in the vid. Dino-awestruck, DMP


Did You See This? 50 Years of Movie Shades 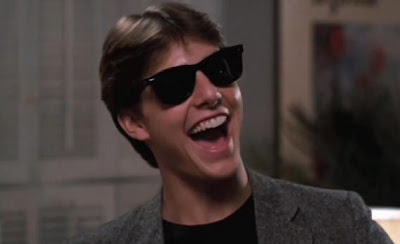 Here at Brow Beat we believe that eyewear design is a crucial element in the success of a film. So we very much enjoyed the supercut below of the best movie sunglasses since 1962. It opens, appropriately, with Rowdy Roddy Piper in John Carpenter's sci-fi classic They Live, and seems to include pretty much every iconic pair of shades since Cool Hand Luke. (I was particularly pleased to see Rufus, time-traveling buddy of Bill and Ted.)

Apart from Men in Black, that is: the video's creators at Found Item Clothing are opposed to the Will Smith/Tommy Lee Jones vehicle, for some reason. And they note a few other films they left out in an "honorable mentions" near the end. Did they miss any others? Let us know in the comments. (The great tune, by the way, is a 1966 Dean Martin recording called "Shades.")

I've always loved "Shades." I used to listen to it over and over again. The tune really does showcase our Dino's wonderful, velvet voice.

Hey pallie, likes Miss AOW, I wonder if you coulda tells me which of the original Dino-al-b-ums that "Shades" appears on? It is simply one of the coolest of the cool Dino-croons! Keeps lovin' our Dino!