Sinatra and Martin, en route to a Riviera vacation, are dressed as spacemen for their roles in the Hope-Crosby picture in this picture snapped on August 4, 1961.

Hey pallies, likes we are ever ever Dino-thankful to our pallies at google Dino-'lerts 'cause they faithful send to our email inbox a vast variety of Dino-related posts hugely helpin' us here at ilovedinomartin to pass on to all youse Dino-holics potent posts awesomely accentin' our mighty magnificant Dino.  Likes one of the primo places that google  has sent us lately is the online presence of the ST. LOUIS POST-DISPATCH which fantastically features a daily series of incredible images of "a curated collection of some of the best AP images that were taken from that date."

Likes today is the third delightful Dino-image that we are featurin' from this swank series.  In June of this Dino-year we featured the first, found HERE, and in July we featured this Dinopose HERE.
Today darin' Dino-image was taken on the set of the Bob Hope & Bing Crosby big screen epic, "The Road To Hong Kong bein' filmed on a set in  Shepperton, England on Aug. 4, 1961.  Likes pallies this is an incredible image of our Dino, Mr. Sinatra, Mr. Hope, and Mr. Crosby that we knows that we never ever have set our eyes on before....and we are absolutely in awe of it.

ps.  Likes pallies, digs our most beloved Dino with his omnipresent  cigarette and liquid libation in hand.... 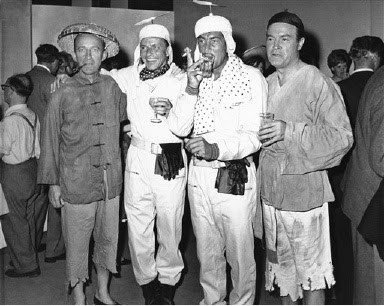 Four big names of Hollywood get together on the set at Shepperton, England, Aug. 4, 1961, during a break in filming scenes of a new movie. From left are: Bing Crosby, Frank Sinatra, Dean Martin and Bob Hope. Crosby and Hope are in Chinese costume for the film, "Road To Hong Kong." Sinatra and Martin, en route to a Riviera vacation, are dressed as spacemen for their roles in the Hope-Crosby picture. (AP Photo)

Haha!! Fun times on the set! What a foursome!