(at one point during filming, Dino asked Frank if he might finally look at a script)

Hey pallies, likes here is part numero duo from Mr. John McElvee's fabulous collection of Dino-hearted offerings at his self tagged blog, "John McElwee's GREENBRIAR Picture Shows."  To us, this "The Rat Pack and Ocean's 11 --- Part Two" shows off McElwee's huge knowledge of cinema and the English language...stunnin'ly scribed and fabulously focused.  McElwee continues his great case for his deep desire that the Rat Pack woulda taken this heist flick much more seriously.

This provocative prose from John, of course, captured our Dino-attentionado....."In probably the film's best exchange, Dean Martin points up futility of O11's scheme and the group's lack of fitness to carryoff same, this rare occasion of DM reading Ocean's dialogue with something like conviction. Was he speaking more to futility of having made this movie? (at one point during filming, Dino asked Frank if he might finally look at a script)"

First we are pleased as punch that John  kudos our Dino with "probably the film's best exchange."   Second, we never ever remember hearin' the story 'bout our most beloved Dino askin' Mr. Sinatra to see the script"....a very very cool Dino-detail for sure.  Truly McElvee offers convincin' evidence for his cool case of desirin' much more from the Pack's efforts in O11.  We have to 'fess up that even with all the wondrous words and tremendous thoughts that our new pallie John offers, we loves the flick just as it is....probably 'cause, likes of course, we loves everythin' that our delightful Dino does just as it is!

Likes, 'gin John offers a stunnin' set of images from the film.  We are particularly fond of the one we share below....loves the evocative expression on our Dino's fabulous face; loves the tag line that McElvee coolly 'n cleverly adds..."Watch Out, Dean!  There's A Real Actor Behind You." 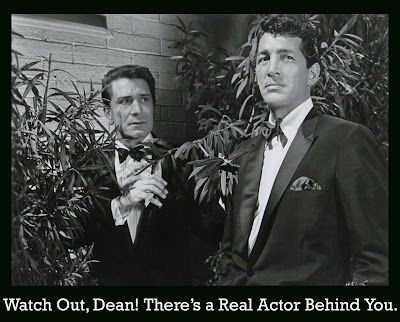 Once 'gin our Dino-diggin' pallie Mr. John McElvee has effusively expressed his pure pure passion for our one and only Dino and we are thrilled to find 'nother dude who is likes totally totally sold out to our main man.  To checks this out in it's original format, simply click on the tag of this here Dino-gram.  More from our Dino-holic pallie John tomorrow, right here at ilovedinomartin.  Dino-always, ever, and only, DMP 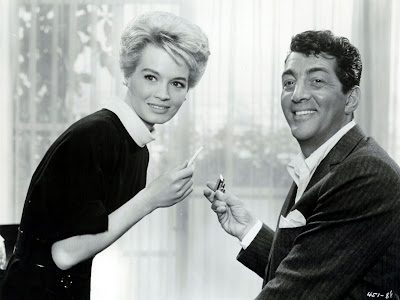 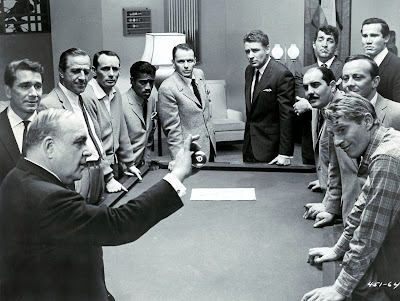 The caper itself was so outlandish as to discourage imitation. That much was probably agreed upon going in. Robbing Las Vegas in 1960 would have been another name for suicide. Not for a moment does this plan seem a serious one, Ocean's 11 tempering the Pack's lunatic notion with comedy and what amounts to a town's own Surgeon General's warning: Never, ever try this for real. That undercuts suspense, of course. We don't sense a Mafia's heavy hand toward protecting its own, but surely membership issued Frank a Do Not list prior to shooting. You Wouldn't Call It a Gang, said Warner ads. Well, no you wouldn't, except maybe Our Gang for childish means by which this heist is executed. Did rivalMob families ever consider a for-real knock over of Vegas casinos? Surely if they did, Ocean's 11 would be no model for planning. Guess the town was sewn up too tight for anyone to ponder such a thing. In probably the film's best exchange, Dean Martin points up futility of O11's scheme and the group's lack of fitness to carryoff same, this rare occasion of DM reading Ocean's dialogue with something like conviction. Was he speaking more to futility of having made this movie? (at one point during filming, Dino asked Frank if he might finally look at a script) 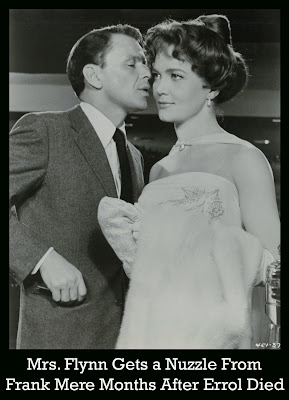 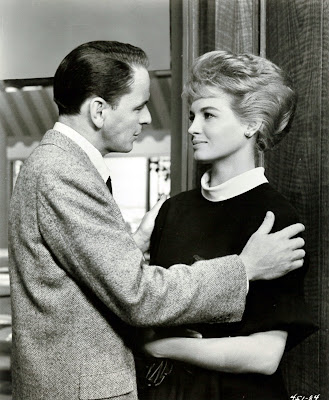 There were cameos to pass dull parts easier.Red Skeltondid a funny to Frank's deadpan reaction and was off within a minute,same with Shirley MacLaine and what looks like an ad-libbed drunk scene opposite Dean. More effective were drop-ins by faded names tossed a day's work for reasons lost to time. I'd guess George Raft and Hoot Gibson were greeting at some lounge/casino in town. Both had filled such position at one time or other. Raft was not long back from shaking hands at Cuban tables before lights went out there. He lends gravitas to a post-robbery boardroom scene that's reasonably close, I suppose, to what might have gone on among Mafia chieftains should a real Vegas raid have taken place. Was gang-connected Raft too close to actuality of casino ownership for comfort? Guess Mobsters figured George for a late show relic too far past prime to suggest true crime, not unlike his back to the 20's racketeer in Some Like It Hot. Hoot was something else, a face dating to when Vegas was all sand. Who knows ... maybe he'd chased indians across that desert once. Anyway, he was there for viewers ancient enough to recognize him, up to and including Frank and Dino ... both may have sat in as boys on Hooter's silent shoot-em-ups. I'd love knowing just whose idea it was to give him a break on Ocean's 11. 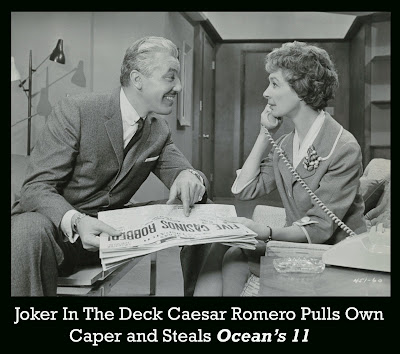 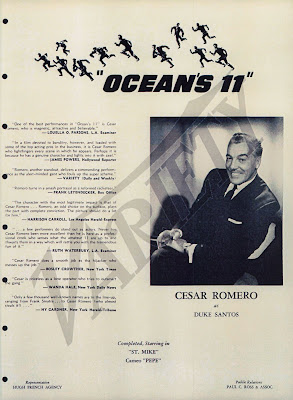 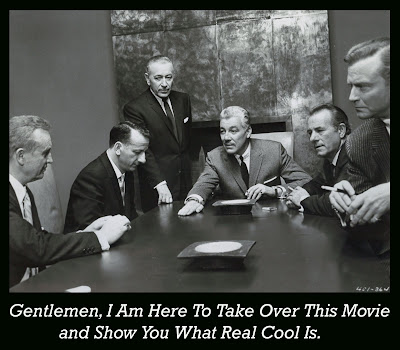 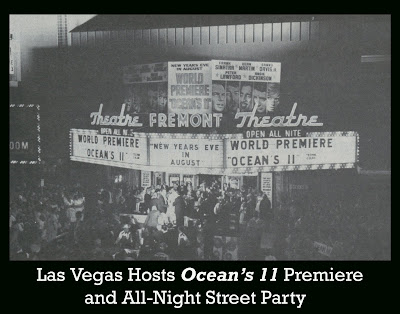 The guy what steals Ocean's 11 is Caesar Romero. He pretty much takes charge of the third act. Did Frank and company know or care about this Joker's heist? A group of five to whom I ranOcean's 11 last week all agreed it was Romero's show from the robbery's finish on in. 1960 observers thought so too. Several polls place him in supporting Oscar nominee contention forOcean's 11, observed Variety in December of that year. Caesar himself got out a trade ad to spread word of critic's approval (above). For my money, he's the cool cat in this show --- suave, unflappable and making most of scenes via commitment several times that of blasé Rat Packers. One scene Sinatra would undoubtedly have ordered reshot, had he noticed, shows CR entering a room and towering over the diminutive star. Did Romero get his lion's share of Ocean's 11 for showing up to work as opposed to oft-truant principal players? My viewing group came away from Ocean's 11 wishing he'd framed the caper ... maybe in that event it would have come off successfully. 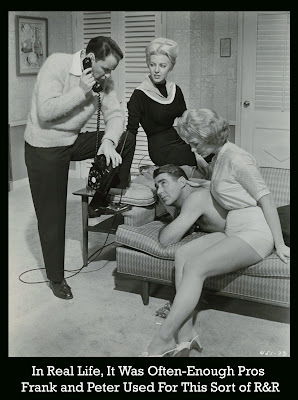 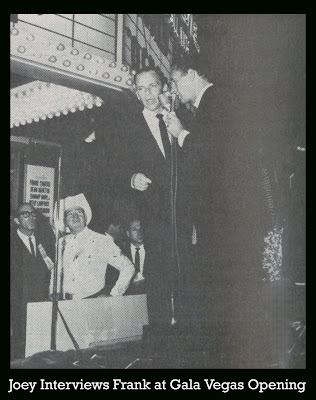 Some reshooting might have helped. Peter Lawford prevailed upon Warners to fill in obvious holes, but they attended more to splashy premiere plans than squaring away a better movie. Power-less player Lawford would go along to get along, a sad fate for anyone in Sinatra's razzmatazz orbit. To his credit, though, Frank kicked in on selling side of O11, attending a June New York meet with director Lewis Milestone and WB execs to round out plans for an August grand open in Vegas. Sinatra liked the pic well enough to private preview it for John and Jackie Kennedy at his Palm Springs home. Spencer Tracy was also there ... wonder if Spence gave Frank an honest answer when asked how he liked the show. World Premiering at LV's Fremont Theatre was sure enough a blowout. Streets jammed, a parade up the Strip, celebrities near outnumbering civilians. Some of revels would turn up on Jack Parr's vid show later. A "summit meet" at the Sands preceding the open reunited the Pack and fired up WB's Steve Trilling to propose filming the act to send out as a follow-up concert feature. But where could it be shown?, asked Army Archerd: The boys rehearsed the material in the locker room, an indication of the tenor of the entertainment offered by the jolly boy's club. 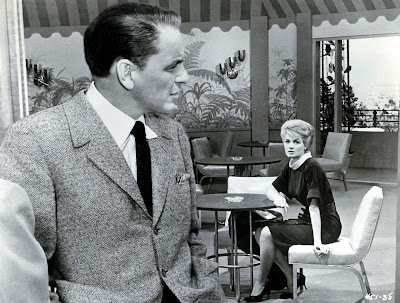 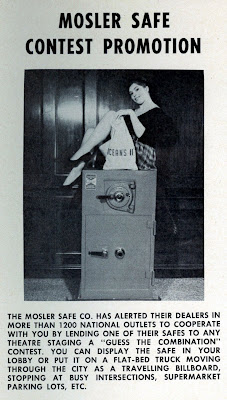 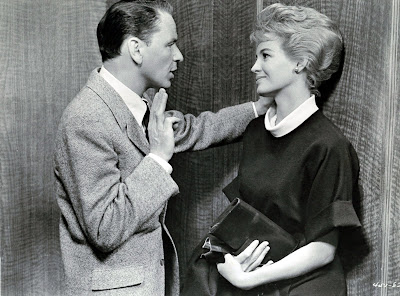 Lewis Milestone was ringside for the Sands party and premiering that followed. He'd afterward go on a twelve-city US tour to promote Ocean's 11. Whatever this director earned over a long career was doubtless dwarfed by percentage payday realized here. He'd later speak well of the film and Sinatra to historians. 1960 showmen in for less loot felt Warners was working a caper of its own, as even neighborhood sub-runs were being hit up for 50% of receipts, a distributor grab in excess of Paramount's 35% demand for the same summer's Psycho. Erstwhile co-producer Peter Lawford, rich off those terms, shopped a biopic around on champ jockey Johnny Longden he'd worked on for several seasons, but ... no takers. His Thin Man TV series had wrapped and expulsion from the Pack would come later, thanks to contretemps with Frank that were in no way Peter's fault. The Chairman himself looked back on Ocean's 11 as a "fun" movie and little more. He'd live long enough to see Rat Pack (a term he always despised) high-life celebrated anew by hipsters not yet born when the pic played new. Just the fact it moved up Warners' Blu-Ray release schedule makes clear O11's continuing hold on fans wishing its ring-a-ding world could live again as their own.
Posted by dino martin peters at 7:06 AM

Hey pallie, likes Danny-o, we thinks youse got good Dino-taste...more from Mr.McElwee comin' in the days ahead. Keeps lovin', keeps supportin' the Dino-cause!

What a great read on such a famous movie. This move is filled with so many famous names. Who wouldn't want to go back in time and actually get a chance to be on the set when all of this was going down! I can picture Dean maybe glancing at the script for moment or two and then saying 'Roll Them'. He seems to have a great gift of studying things once, maybe twice, and then getting down to work. Not very many people can do this, in acting or anything else.

Thank you my friend for this great blog.

Hey pallie, likes we are with you Scotty-o. Likes how cool woulda it be to be on the set with our Dino and his pallies havin' just a ton of fun! Keeps lovin', keeps sharin' our one and only Dino!