One of today’s most versed country traditionalists finds inspiration in the cocktail swigging, ‘60s swinging swagger of Dean Martin? 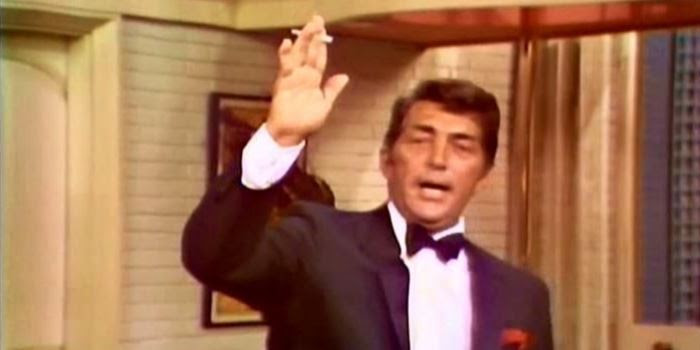 Hey pallies, likes the topic of today's Dino-devotion is near and dear to our Dino-hearts....that of 'nother of today's established entertainer's awesome adulation of our one and only Dino.  Likes before we goes into the Dino-details, we wanna gives a shout out to our pallie of pallie Mr. Danny G. of "Danny G.'s Sunday Serenade With Dino" fame.  Our Dino-holic Danny-o is always always on the lookout for intriguin' information a la Dino and likes when he comes 'cross somethin' special he energetically emails us to make sure we're in the Dino-know 'bout it.

Well, the topic of today's Dino-gram originated via Danny G. 'though we chose 'nother source of the information to share here at ilovedinomartin.  Today we goes to the marvelously musical blog "The Musical Box - MUSINGS ON MUSIC FROM CENTRAL KENTUCKY AND BEYOND," where supurb scriber Mr. Walter Tunis has written some powerful prose tagged "living with the nashville rash."

Mr. Tunis's prose accents "veteran" country western singer Mr.Dale Watson from Texas and takes the form of a Q&A session with this giant of the C&W scene.  What drew our pallie Danny G.'s attentionado, as well as ours, is when Watson was quired 'bout his personal "musical heroes", none other then our Dino make his short list.  When Mr. Tunis inquired 'bout that choice sayin', "Dean Martin? One of today’s most versed country traditionalists finds inspiration in the cocktail swigging, ‘60s swinging swagger of Dean Martin?".....the response was...“Oh yeah,” Watson said. “I loved his voice right off the bat. But when I watched The Dean Martin Show, you could tell he had fun. He sang great, but he had so much fun onstage."

Likes, of course, our Dino-hearts are hugely warmed by Mr. Watson revelin' his revealin' in the glory of our most beloved Dino!  It is always always marvelous music to our ears to find 'nother of today's great entertainers pointin' to our King of Cool with the deepest of deep delight!

We sez our thanks first of all to our Danny-o for gettin' on track to share this wonderful Dino-devotion, and then of course to country great Mr. Dale Watson for powerfully and passionately speakin' of his awesome adulation of our Dino.  And, we also sez our thanks to Mr. Walter Tunis and all the pallies at "The Music Box" for gettin' this in print so that we could share it with Dino-philes everywhere.  To checks this out in it's original format, simply clicks on the tag of this here Dino-gram.  With the deepest of deep devotion to our Dino, DMP

On a 1995 tune called Nashville Rash, Dale Watson roared on unapologetically about being “too country now for country,” a remark that underscored just how vast the distance was between his brand of hard core honky tonk and the wave of pop attitudes that were already overtaking the roots-driven music he grew up with.

Today, the veteran Texas singer takes an opposite view. Longtime fans shouldn’t fret, though, as the heavily traditional country sound descended directly from giants like Merle Haggard, Johnny Cash and Waylon Jennings remains his steadfast style. But the distance between that music and the Nashville norm has him modifying his perspective.

“You know what? That’s a good idea. I hear a song coming on.”

A regular Lexington visitor in the mid-to-late’90s at Lynagh’s Music Club when his recording career commenced, Watson’s honky tonk vocabulary remains devoted to tradition on two of his newest albums, 2013’s El Rancho Azul, which vastly upped his national exposure through considerable critical praise and television appearances, and this summer’s Lloyd Maines-produced Call Me Insane. But for an artist with such a scholarly command of country tradition, one may find a few surprises scattered among his list of musical heroes.

“Three stand out in my mind – Elvis (Presley), Johnny Cash and Dean Martin.”

“Oh yeah,” Watson said. “I loved his voice right off the bat. But when I watched The Dean Martin Show, you could tell he had fun. He sang great, but he had so much fun onstage.

While his music hasn’t changed over the years, Watson has done a lifetime of hard living since those ‘90s shows at Lynagh’s. Following the 2000 death of his fiance in a car accident, Watson dropped into a personal tailspin of alcohol and drug abuse. Following a year-long recovery, he recounted the whole devastating saga in the tribute album Every Song I Write is for You and a 2006 documentary film titled Crazy Again.

“Hey man, I survived living,” Watson said. “It’s not easy sometimes. Most of the time, in my case, I was my own worst enemy – a lot of times, really. But if you can survive yourself, at the end of the day, you have a pretty healthy outlook on life. I know I’m happier these days than I ever have been.

“The documentary was my way of fulfilling a promise. I wanted to let people know what I’ve been through. I thought that was really important. It wasn’t easy, but I’ve had so many people come up to me and tell me how that particular documentary or album helped them out. It makes you feel good to share something like that.”

While Watson certainly doesn’t maintain the commercial profile of today’s country stars (he continues to call his music “Ameripolitan” as opposed to country), the favorable reception to El Rancho Azul and Call Me Insane represent subtle breakthroughs, spreading the word on serious country tradition for an devout and expanding fanbase.

“It is weird, you know? To be the age I am (52), having been in the business so long, and now having some success is scary. I’ve been banging my head against the wall for so long that it’s strange to finally have the breaks start coming. It’s an unusual place for me.”

Dale Watson and his Lonestars with the Coralee and the Townees Trio perform at 8 tonight at Willie’s Locally Known, 805 N.Broadway. Tickets are $20. Call (859) 281-1116 or go to www.willieslex.com.

It is no longer a surprise to see todays music is still being influenced my yours truly, Mr. Dean Martin! Thank you my friend for bringing this gem our way and a special thank you to Mr. Danny G for getting the ball rolling on this great story and read.

Have a great upcoming weekend!

Hey pallie, likes Scotty-o how cool to hear from you man. We have been misssin' you and wonderin' how you have been....knew you were goin' to be outta action for a while...glad to have you back in the Dino-action! Indeed, ain't it wonderful to see just how many fine musical artists are still comin' under the influence of our most beloved Dino! Keeps lovin', keeps sharin' our most most beloved Dino!