.....immediately thinking of my Dad, the biggest Dean Martin fan I have ever known. 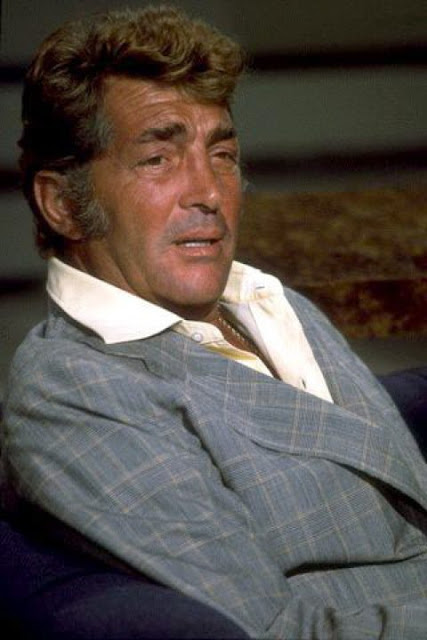 Hey pallies, likes here's some Dino-prose that we've been holdin' onto for some time and indeed Dino-amore month is the bestest of best times to shares it with all youse Dino-holics.  So, likes on this nineteenth  day of Dino-amore month we takes you to the blog "McHuston Booksellers & Irish Bistro - BOOKS & IRISH FARE" where blogger Mr, Larry Loefling holds forth.  The tag of the blog refers to the family book and bistro business that Loefling has "in the Tulsa, Oklahoma suburb of Broken Arrow."

Today we excerpt a portion of Mr. Loefling's tremendously  touchin' reflection titled, "Music. Soothing the savage beast and all that."  Larry shares how when he plays Dino-croons in his biz, it has him "immediately thinking of my Dad, the biggest Dean Martin fan I have ever known."   And likes how hugely  heart-touchin' is that pallies?!?!?!?

All Loefling has to do is hear our Dino's velvet voice and it immediately brings back the fondest of fond memories of his father's deep devotion to our most beloved Dino.  Faithful readers of ilovedinomartin knows that this is a storyline that we  have shared time after time....like father....like son.  We immediately thinks of our  pallies  Danny G. and Ed, both who's fathers' powerfully pure  passion for our most beloved Dino was potently passed on to their boypallies.

We thanks Mr. Larry Loefling for so affectionately sharin' his father's deepest of deep devotion to our Dino and how  he can't hear our Dino croonin' without the warmest of warm memories floodin' in on him of his dad's devotion to Dino!  Likes if you ever happen to be in the area of Broken Arrow, OK, be sure to stop in and share your Dino-delight.  To checks this out in it's original format, simply clicks on the tag of this here Dino-report.  Dino-yearnin', DMP

Music. Soothing the savage beast and all that.

It’s always amazing to me how our brains link things together. Since I have only the one brain, I can’t say whether my experiences are unique or universal. Things like tasting a particular food and immediately conjuring a memory.

Things like – hearing crooner Dean Martin’s voice soaring from the shop’s speakers and immediately thinking of my Dad, the biggest Dean Martin fan I have ever known. I’m guessing that – because he had it on the television and I was intrigued enough to watch with him, I remember segments like Crazy Gugenheim and Foster Brooks, the (now politically-and-socially-incorrect) lovable drunk who could not get out a complete sentence without a hiccup.

Now, I just have to hear Dean Martin singing and I can remember my Dad in his big green easy chair, watching the TV program.

Foster Brooks, the lovable drunk, lived to the age of 89. Singer and actor Dean Martin was 78 when the curtain dropped down. My father had just pushed 50.

So, I hear his music and think of him. Because we never had that time together as adults. Never spoke together as men. Always – dad and kid son.

I grew up, but he never grew old.
Posted by dino martin peters at 8:07 AM

Very movin'. Dean stirs up LOTS of emotions & memories for many of us Dinholics. Nice read.

Hey pallie, likes Danny-o, we knew this would have very very special Dino-significance for you! Keeps lovin' our most beloved Dino!

I have to agree that this is a very heart felt story. It really is amazing to hear how DM has touched so many people of all different walks of life. Thank you for bringing this story to all of the DM fans around the world.

Have safe and happy weekend.