Hey pallies, likes reviews of our Dino's big screen efforts keeps surfacin' as we do our daily surfin' of the ol' web for Dino-devotion.  Likes today we land at the flick pad "Joel's Classic Film Passion where Mr. Joel Williams has reviewed that classic of Dino-classics, "Ocean's 11."  Mr. William review, as you will note below is part of a "Billy Wilder Blogathon" and the first thin' we learned from Joel's post is that " Wilder was listed as an uncredited writer" of this most loved Dino-epic.

Gotta 'fess up that what we liked most 'bout Joel's prose is that he gives our most beloved Dino numero uno billin' statin'...."Next, let’s talk about the cast. Ring-a-ding-ding...we’ve got the great Dean Martin along with Rat Pack buddies Frank Sinatra, Sammy Davis Jr., Peter Lawford and Joey Bishop."  Likes we are thrilled to see Mr. Williams' clear 'bout who was truly the head of the pack!

It is always always such a pure pleasure to see a Dino-flick made over 50 years ago still gainin' in acclaim by pallies likes Mr. Joel Williams and we salute his for homagin' our Dino in this wonderful way.  To checks this out in it's original source, simply clicks on the tag of this here Dino-gram... Dino-always, ever, and only, DMP 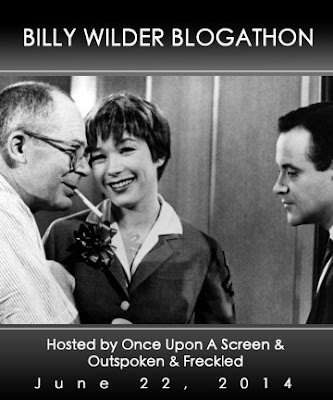 When I saw that Kellee and Aurora were doing a blogathon on Billy Wilder, I jumped at the chance to participate. Here's a light piece on Ocean’s 11 (1960) which Wilder was listed as an uncredited writer. There are many great things about this film, I’d like to discuss a few of them.

Starting at the very beginning, the opening title sequence is done by none other than the great graphic designer Saul Bass. He’s done many opening title sequences including some of my favorites: Vertigo, Anatomy of a Murder, The Man With the Golden Arm, Psycho, North By Northwest...and more recent films like Casino, Goodfellas. Seriously, the man was a genius...in addition to his great title sequence work, he created many iconic corporate logos, here’s a Google image search that’ll give you a quick idea of his work: http://goo.gl/ybXh4A. 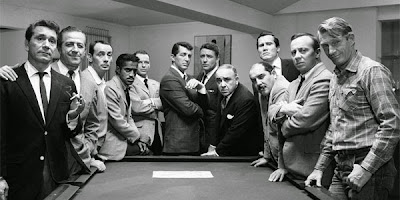 Next, let’s talk about the cast. Ring-a-ding-ding...we’ve got the great Dean Martin along with Rat Pack buddies Frank Sinatra, Sammy Davis Jr., Peter Lawford and Joey Bishop. Here’s the complete list of eleven:

Along with “the crew” we've got sexy Angie Dickinson and a knockout performance by Cesar Romero in a supporting role. Make no mistake most of the film is focused on the Rat Pack (and specifically Martin, Davis and Sinatra.) 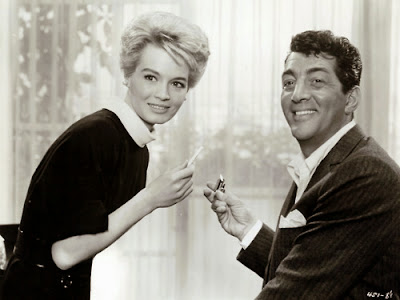 Let’s talk about the heist genre. This is one of my favorite genres and the original 1960 version of Ocean’s 11 uses the standard three-act heist progression:
The crew plans the heist
The crew carries out the heist
The plan falls apart and the crew ends up with nothing (or worse)


If you've ever seen the remake (released in 2001) you know that act three doesn't follow the standard heist plot. One reason I much prefer this original version. 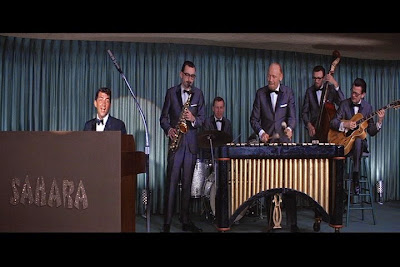 
There are a few great numbers in the film...the first is by Sammy Davis Jr. (who plays--of all things--a garbage man) and it’s a knockout number called Eee-O Eleven. The song is about one day making the big score and living the lush life. The second is Dean Martin singing Ain’t That a Kick In the Head accompanied by the Red Norvo jazz quintet...quite a swingin’ number.

Watching this film, I keep pointing to things and say “I want that.” The furniture, clothes, cars, etc.  The look, the feel, the overall aesthetic are wonderful to my eye. Clean lines, simple design...good stuff.  For a great overall overview on the clothes style of this film, check out Kimberly's penultimate blog post: Toasting to 2014 with Frank Sinatra and the Rat Pack in OCEAN'S 11

The Crew files out

Once the boys accept their ruin, they exit out of the funeral home and walk down the sidewalk in Las Vegas passing by a marquee touting their very names. As Will would say, “how meta.”

One of the great iconic shots in film

Awesome review of a TRUE 60's classic! This flick makes you wanna jump in your TV & hang out with Dino back in the MOSTEST swingin' decade ever!