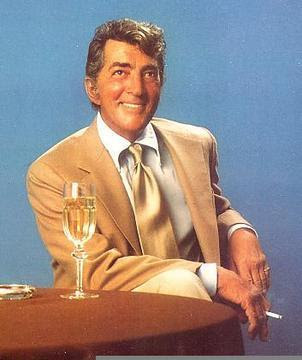 Hey pallies, likes gotta 'fess up that today's Dino-devotion is one of the most uniquely unusual that we here at ilovedinomartin can ever remember sharin'.  It's by a dude tagged Mark Dery and comes from his 'net pad,
"SHOVELWARE."  Accordin' to his bio,  Mr. Dery  "is a cultural critic. His writings on media, technology, pop culture, and American society have appeared in Artforum, Cabinet, Elle, The New Yorker, The New York Times Magazine, Rolling Stone, Salon, Spin, and Wired, among others. He lectures frequently in the States and abroad."

What first grabbed us and profoundly motivated us to share this with you is the tag of the post...."Dean Martin Existentialism: Bobby Darin’s “Beautiful Things”    Likes ilovedinomartin is totally totally smitten with notion of "Dean Martin Existentialism".....a very very apt way of describin' our Dino's total total detachment from the world....our Dino's menefreghista.....

But likes how strange it seems to compare it to Mr. Bobby Darin's rendition of "Beautful Things."  Anywho in listenin' to Darin's croonin' of the tune, it indeed does seem so so Dino-ish in style.  Don't think that our Dino ever sang or recorded this ballad that came from the soundtrack of the original "Doctor Doolittle" that starred Mr. Rex Harrison.

This is one case where ilovedinomartin woulda really likes to be in communicato with Dery to gets to delve and dig deeper into his appreciato for our most beloved Dino....'cause likes anyone who turns the phrase, " a sly wink of Dean Martin existentialism" has to be the deepest of deep devote of our King of Cool.

So, here it is pallies, a Bobby Darin post that gives the hugest of huge knowin' nod to our great great man!
ilovedinomartin salutes Mr. Mark Dery for the coolest of cool Dino-thought.  To checks this out in it's original form, simply clicks on the tag of this here Dino-report.  Dino-always, ever, and only, DMP

btw, likes it ain't seemin' right to post a Bobby Darin without at least also sharin' a Dino-croon with youse as well....so, likes here's our Dino singin' "C'est Si Bon" from the Dino-show where likes you guessed it pallies, our Dino does his glorious wink at the end!

“Why the Nightingale Sings: On Bobby Darin’s ‘Beautiful Things’”: HERE. Isn’t there something unsettling, a sly wink of Dean Martin existentialism, in Bobby Darin’s finger-poppin’ Vegas-hipster version of “Beautiful Things” (from the 1967 movie musical Doctor Dolittle)? A hint of nonchalant menace to that walking bassline as it slinks down a minor scale in the song’s opening bars? Subliminal whispers of memento mori amid the brassy blare of Roger Kellaway’s orchestral setting, which nails that sweet spot between suave and schmaltzy? Intimations of mortality between the lines of Leslie Bricusse’s lyrics about “beautiful days of sun-kissed showers” and “beautiful nights of moon-kissed hours,” right there in Darin’s breezy delivery of the lines, “Our lives tick by like pendulum swings/ Delicate things, butterfly wings?”

Hey pallie, indeed Miss AOW...no one more knowin' then our Dino...and that Dino-wink sez oh so so much more then all the words in the world coulda express!!!!! Keeps lovin' our most beloved Dino!

Lotta power behind that wink! ;)

Hey pallie, likes simply grooves on your likes totally rad Dino-remark..."Lotta power behind that wink! ;)" Even a simple little wink is supremely and superbly sexy when it comes from our Dino! Likes Danny-o, keeps lovin' our most beloved Dino!