The Best Of Dean Martin And His Friends

Hey pallies, likes time for a true Dino-'fession today by ilovedinomartin.  Some weeks ago we were intrigued by a Amazon listin' of a DVD tagged "The Best Of Dean Martin And His Friends, but seein' that Amazon only had a couple of copies listed at the time and that the single Dino-disc were priced 'round $35 and 'cause we coulda not find any other info we simply chose not to publish info on this Dino-find.

Well fast forward a few, and some of the mystery surroundin' this new Dino-treasure was resolved with a post scribed by a dude tagged Ivan at the Peggy Lee dedicated pad, "PeggyLee.com."  As you will read below, the single disc is a Walmart exclusive that was priced to sell at less then $10 and was sold out in a couple of weeks.  Seems that Walmart created no fanfare in the release so many many of us Dino-philes never knew of it's release.

Likes, of course, all us Dino-holics are hopin' that sometime soon more copies of this Dino-disc will 'gain likes appear on the shelves of Walmart.  ilovedinomartin 'presses our great appreciato to Mr. Ivan for helpin' best as he could to share info on the new DVD and it's current status.  To checks this out in it's orginal format, simply clicks on the tag of this here Dino-message.  Dino-yearnin', DMP

The month of June saw the release of a new Dean Martin DVD: 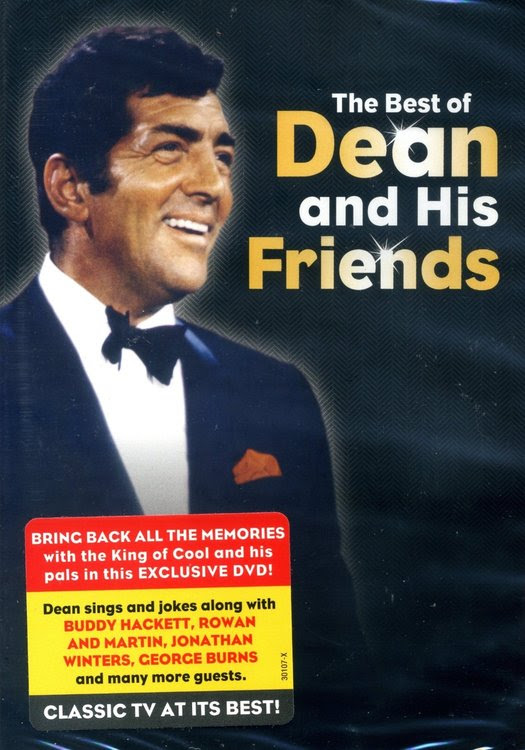 It contains three episodes of his TV show, including one in which Peggy Lee performs the following selections:
You've Got Possibilities
The Shining Sea
Medley with Martin (All Alone, Call Me, I Couldn't Sleep a Wink Last Night, Good Mornin')
Guys and Dolls medley with cast (The Oldest Established, Guys and Dolls)
This DVD is a Walmart exclusive. According to reports made by USA fans of Dino, all copies vanished from Walmart's physical stores within two weeks. Walmart's USA online store does not list the item. (My suspicion is that a few copies of what might be a Canada-only release were mistakenly sent to some American stores. The reason why I think of Canada is that the online Canadian Walmart store does carry the item.)
Luckily, there's an alternative for American fans: copies are being currently sold at Amazon. (However, they are priced at $35... These were selling for less than $10 at Walmart stores!)
In somewhat related news, Peggy Lee's performances of "Little Girl Blue" and "Alright, Okay, You Win" (from other episodes ofThe Dean Martin Show) have now returned to YouTube:
[www.youtube.com]
[www.youtube.com]
Over the years, I think "Little Girl Blue" has appeared and disappeared from YouTube two or three times. I wish that "Alfie" (from yet another Dean show) re-appeared as well.
Ivan
Posted by dino martin peters at 7:09 AM