Hey pallies, likes it's been quites the time since ilovedinomartin has been able to report on new Dino-treasure 'bout to be released, but we are thrilled to be to share the followin' grand Dino-news with all youse Dino-philes.  Reported recently by Mr. Stephen Spaz Schnee at the blog pad "DISCUSSION MAGAZINE.COM" is the thrillin' news of a BEAR Family release of a very very limited 7" EP featurin' our most most beloved Dino with Ricky Nelson and John Wayne singin' "My Rifle, My Pony And Me" From that greatest of great westerns, "Rio Bravo."

Youse can see below the great great Dino-art that will grace this fabulous new release as well as learn of the other three great artists and tunes that will be included in this wonderful homage accentin' our Dino singin' on what most Dino-philes consider our greatest man's greatest big screen effort.  Information can be accessed, it you simply clicks on the tag of this here Dino-gram and goes to the original postin', 'bout a couple of sites that are takin' preorders.

ilovedinomartin thanks all the pallies at "DISCUSSION MAGAZINE.COM" and likes specially Mr. Schnee for puttin' us on to this newest of new Dino-collectible!  Dino-delightedly, DMP 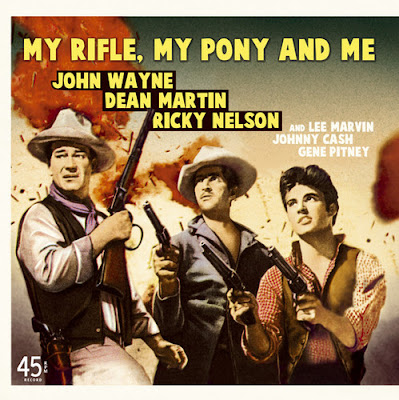 POSTED BY STEPHEN SPAZ SCHNEE AT 11:45 AM
Posted by dino martin peters at 2:16 PM