A Swingin' Review of The Dino-inspired Teen Read, "The Spectacular Now."

Hey pallies, likes as I was ponderin' the coolness of yester-Dino-day's post 'bout the swingin' Deanager character of Sutter Keely in "The Spectacular Now," it caused me to ponder whether or not ilovedinomartin have chimed in before on this great Dino-honorin' tome.  Well, indeed, after doin' just a wee bit of Dino-research I found out that on November 12, 2008 we had indeed shared an awesome review of Tim Tharp's outstandin' Teen Read by a Mr. David Elzey at the "Guy Lit Wire" blog.

So, dudes likes below is that original Dino-post pretty much in it's original format with all it's Dino-glory.  Likes can't wait to see this novel that has just come to the big screen.  This is simply an awesome op for more and more of today's youth to get into the Dino-groove and begins their journey of life-long Dino-devotion!  Dino-always, ever, and only, DMP

Hey pallies, more and more our Dino is appearin' in today's literature. The lastest novel that spreads some Dino-love 'round is a youth fiction book tagged "The Spectacular Now" by Tim Tharp, which has just been tagged a finalist for the National Book Award. The main character of this novel is a dude tagged Sutter Keely, a senior in high school who loves his seven and sevens (one of our Dino's fav liquid libations) and is likes a total Dino-wannabe.

How cool that Mr. Tharp is introducin' our Dino to a new generation through his new book. Read all 'bout it below from this blog post by a guy tagged David Elzey. As Dino-always, if you wanna read it in it's original form, just clicks on the tagg of this Dino-post and goes over to the Guys Lit Wire Blog. So loves seein' all the ways that the Dino-message is bein' proclaimed to today's youth who are turnin' on to our main man is such way cool Dino-ways.... Dinodiggin', DMP

The Dean Martin of Oklahoma 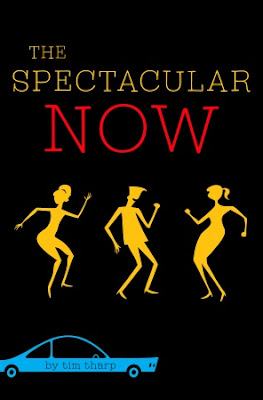 It's an odd, almost unsettling experience to finish reading a book, fire up the internet to see what sort of buzz the book has, and then discover that almost simultaneously the book was just named as a finalist for the National Book Award. That's exactly what happened a few weeks back, in one of those moments when you wonder if the universe is trying to tell you something important.

Sutter Keely is a charmer. A senior without a care, he is an unrepentant alcoholic living in the now, willing to embrace the weird. The only problem is that his beautiful fat girlfriend Cassidy is getting tired of his shtick. He's late and constantly drinking Seagam's and 7-Up; he's fun but irresponsible; he's a good time at parties but he's selfish. When the last straw comes and Cassidy finally dumps him Sutter figures she'll eventually come back around to his wannabe Dean Martin swagger.

The problem is that Cassidy is looking down the road at life beyond high school and Sutter isn't there. And not just Cassidy, all of Sutter's friends seem intent on trying to figure out what comes next. After years of floating without a care Sutter doesn't see the big deal, or the need to plan beyond his current buzz. So when Cassidy shows how serious she is by picking up with a new boyfriend, Sutter redirects his energies toward hooking up his best friend Ricky with a girl of his own.

Wallowing drunk, he is found passed out on a lawn early one morning by Aimee, one of those withdrawn girls everyone walks all over. Taking her on as his own special project to help her grow a spine and realize her inner self, Sutter finds himself promising to take her to the prom, officially declaring her his girlfriend, and knowingly leads her on in an effort to build self esteem. But Aimee isn't like the other girls he's dated, willing to hang out with a party boy until it's no longer fun. Aimee has fallen in love -- deep, hard, and seriously -- and slowly begins to entangle Sutter into her plans and dreams, into their combined future together. She could be the girl Sutter has always needed, the one he never realized he'd always wanted, a girl who could change him for the better.

If Sutter doesn't first succeed in dragging her into his own dead-end spiral.

Will Sutter reform, confront his deadbeat father and clean up his drinking? Or will Aimee become his sloppy, drunken sidekick, the girl who abandons her dreams of college and NASA to stay by the side of the only guy that has ever bothered to give her the time of day?

Up until the final pages there's no way of knowing how this is going to turn out. Tharp does a nice job of having the characters remain true to themselves in such a way that every meeting is a quiet trial of wills. When Cassidy continues to get together with Sutter on Thursday afternoons after they break up -- and with the full knowledge of their new dating partners -- Cassidy makes no bones about the fact that she will probably always be drawn to Sutter's bad boy antics but cannot let him back into her life as anything more than a buddy. This suits Sutter just fine, but his unspoken longing for Cassidy seeps in and pushes him that much farther along. He's like a comet that gains velocity in her orbit, then spins wildly out into the universe seemingly with a lack of control, but he's always drawn back into her gravitational orbit when he reaches the outer limits with Aimee.

Tharp pulls a nifty trick in giving us the portrait of a charming young drunk well on his way toward becoming a pathetic one. But he doesn't judge -- Sutter's friends are more than willing to do that, and they do it with a large dose of tough love despite the apparent futility of their gestures. There were moments when I was almost afraid Tharp was romanticizing teen alcoholism in trying to present a realistic portrait, but Sutter's own aimlessness undermines anything remotely cool about being drunk. It plays as humor when Sutter goes to his sister's house for dinner and nearly sets himself on fire when he tries to secretly smoke a joint in her closet, but Sutter's empty apologies and quick judgments about his family members make the laughter ring hollow.

I wasn't as impressed with Tharp's last outing, The Knights of Hill Country, because there was something about it that felt stale. This time out Tharp returns to his Oklahoma soil with an approach that feels slightly on edge. Not edgy, but teetering at the brink of excess and charm -- much like its main character. It is unflinching in its handing of teen drinking, almost casual, but equally sober about what sort of dead end that leads to.

I don't think it's necessarily undeserving the National Book Award, but given the competition I'm having a hard time seeing this pull through as the winner. Then again, perhaps the universe was indeed trying to tell me something. We'll find out soon enough.

also:
The Knights of Hill Country
by Tim Tharp
Knopf 2006
Posted by dino martin peters at 7:18 AM