Martin is good fun, the gadgets wacky and vehicles bizarre

Hey pallies, likes the web is full of unendin' homagin' of our most beloved Dino as super spyster Matt Helm. Today we takes youse to the blog, "The B-List Super Hero Roll Call," where multi-talented Mr. Ryan J. Ebelt holds forth. Ebelt is a man of many many talents includin' scriber and artiste.

Likes a huge part of why I chose to share Ry's talents with all youse Dino-philes is 'cause likes I totally totally digs Ebelt's absolutely rad sketch of our Dino and Miss Janice Rule on the 'cycle in "The Ambushers." Hopes that Ry will use his Dino-creativity to share more and more Dino-art with us!

Anywho, below is Ebelt's oh-so-short, but oh-so-cool review of the Helmer quartet. Totally totally grooves on these Dino-reflections...." Martin is good fun, the gadgets wacky and vehicles bizarre (Helm's first vehicle is a trick-filled station wagon!), the movies are completely watchable and hilariously awful." Obviously Ry "gets Martin" and digs watchin' our great man playin' his great cool, hip, and ever randy self!

ilovedinomartin salutes Mr. Ryan J. Ebelt for usin' his multi-talents to put the accent on our Dino and this way and draw his readership into knowin', lovin', and honorin' our most honorable man! To view this in it's original format, likes simply clicks on the tag of this here Dino-gram. Dino-delightedly, DMP

Having written a review of Our Man Flint on my review blog (click here to read!), I decided to revisit the 60's world of super-spy adventure! James Bond has been a hot property since first appearing on the printed page in 1953, and the movies have been a pop culture staple since Dr. No (1962). And as has been the case since the dawn of Hollywood, success breeds imitation. And while many of the Bond knock-offs have long been forgotten (no one I know who loved Austin Powers knew where half the references were coming from), the craze was pretty widespread. 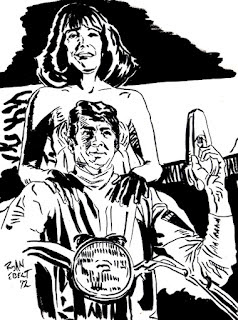 One series seeking to cash in were the Matt Helm movies, starring Dean Martin, and produced by Irving Allen, former partner of Albert "Cubby" Broccoli, producer of the Bond films. Based on the long-running series of novels by Donald Hamilton, the movies took on a swinging sixties tone compared to the dark and violent atmosphere of the books. Martin is good fun, the gadgets wacky and vehicles bizarre (Helm's first vehicle is a trick-filled station wagon!), the movies are completely watchable and hilariously awful. Think of them, if you will, as James Bond as created by the makers of the 60's Batman Tv series.