Dean Martin is at ease as a headliner with no need of his usual Rat Pack buddies.

Hey pallies, likes woo-hoo dudes...likes how cool is it that the big news of the release of our Dino's western, "Something Big" is startin' to be shared all over the 'net. Today we turn to 'nother review of this fabulous Dino comedic western at "Blog Critics." From the pen of Miss Elizabeth Periale, "artist, blogger, and culture critic," comes a very cool review that is sure to send many many pallies out in search of their very own copy of this swingin' flick.

Periale shares some very interestin' details 'bout this early '70's big screen effort that I had not known...likes "The filming locations of Something Big outside of Durango, Mexico, add another layer of authenticity to the film." And, it is clear that Miss Elizabeth enjoys viewin' our Dino as she states, "But the intention of the film is to amuse, and it manages to do that with good humor. Dean Martin is at ease as a headliner with no need of his usual Rat Pack buddies. He helps make Something Big an entertaining experience."

ilovedinomartin expresses our Dino-appreciato to Miss Elizabeth Periale and the pallies at "Blog Critics" for helpin' get the word out that "Something Big" is finally available for Dino-viewin' pleasure. To reader Periale's Dino-reflections in it's original format, as usual, simply clicks on the tag of this here Dino-report. Dino-delightedly, DMP

The newly released on DVD Something Big is a comic western from 1971 featuring Dean Martin.

Practically every character in the film gets a chance to utter the two words "something big," as they describe bandit Joe Baker's (Dean Martin) scheme to pull off one more big heist. His brilliant plan is to trade a woman for a Gatling gun. But the woman he ends up choosing when he ambushes a stagecoach is Mary Anna (Honor Blackman), the wife of the territory's retiring U.S. Army colonel. Colonel Morgan (Brian Keith) hadn't exactly been eager to retire or see his wife again, who he had described to all of his men as a "cold fish." Baker forms a very different impression of Mary Anna after traveling with her on the way to the exchange. And he starts to wonder if his goal of a Gatling gun is so big after all. 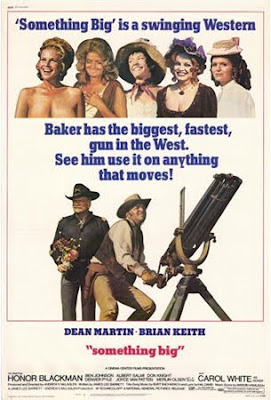 But Baker's kidnapping isn't the only "something big" on the horizon. Making her way westward is Dover McBride (Carol White), a woman that Baker pledged to marry many years before who is determined to hold him to that promise.

Director Andrew McLaglen is no stranger to the Western genre. A veteran of such television series as Gunsmoke and Rawhide and films featuring John Wayne, like McLintock! and Chisum. The filming locations of Something Big outside of Durango, Mexico, add another layer of authenticity to the film.

The film is widescreen with a sharp transfer that looks crisp and clean on a large-scale high-definition television screen. The title song, "Something Big," was written by Burt Bacharach and Hal David and performed by Mark Lindsay. The film runs approximately 108 minutes, with Dolby digital (mono) sound and subtitles. The film is rated PG-13 for some violence and adult themes. The DVD includes a theatrical trailer, but no other extras.

The film is definitely dated. Its portrayal of Native Americans is far from what modern audiences would consider politically correct. Most of the characters are broad caricatures, and Something Big has to be viewed in its context of the late '60s, early '70s. But the intention of the film is to amuse, and it manages to do that with good humor. Dean Martin is at ease as a headliner with no need of his usual Rat Pack buddies. He helps make Something Big an entertaining experience.

I loved our Dino's work with the Rat Pack.

However, our Dino didn't need the Rat Pack and brought our more nuances of his talents when he performed without his Rat Pack buddies.

Hey pallie, likes EXACTLY Miss AOW...likes I thinks you and I are on the same Dino-note and that's why I chose that sentence from the review to headline this Dino-post. Likes our Dino never ever needed anybody! Keeps lovin' our Dino!