For The Silencers, that meant a $1.2 million paycheck, more than twice the money Sean Connery got for doing Thunderball.

Hey pallies, likes today's Dino-patter from the blog pad "HMSS Webblog - Official Blog of the James Bond E-zine Her Majesty's Secret Servant," takes a stunnin' perspective on our most beloved Dino's spyster's Matt Helm films that this Dino-holic never ever thoughts 'bout before. The editors of "HMSS" pose the provocative study of "The non-Bond film that had the biggest impact on 007.

Likes what non-Bond spy flick that had the hugest inpact on the Bond franchise? Well, the answer these Bond expert dudes comes up with is none other then our great man in the great first Helmer, "The Silencers." Likes you Dino-philes are certainly gonna wants to read "HMSS" very evocative reasonin' below.

Today's Dino-reflections from this Bonded source simply proves the undisputable power of our Dino....only our King of Cool was able to hugely impact 007! ilovedinomartin sents out our deepest of deep Dino-appreciato to the editors at "HMSS" for such a wonderfully wise witness to the transformin' power of our Dino! To view this in it's original format, simply clicks on the tag of this here Dino-devotion. Keeps lovin' our Dino! Dino-livin', DMP

The non-Bond film that had the biggest impact on 007 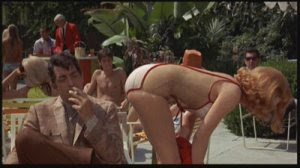 Dean Martin as Matt Helm during a dramatic moment in The Silencers.

With the 50th anniversary of the James Bond film series, we got to thinking about the 007 film competitor that had the biggest impact. It’s really not much of a contest. It’s 1966′s The Silencers.

Now, other spy films had an impact on the style of Bond films. Studio executives told The New York Times (without letting their names be attached) in 2005 that The Bourne Identity and The Bourne Supremacy comprised the model for Daniel Craig’s rebooted 007, beginning with 2006′s Casino Royale and especially with 2008′s Quantum of Solace. Even non-spy films influenced earlier 007 films such as Live And Let Die (Shaft, Super Fly), The Man With the Golden Gun (Bruce Lee kung fu films) and Moonraker (Star Wars).

But The Silencers rocked the Bond franchise in ways other films didn’t. The 1966 movie was the first of four Matt Helm movies produced by Irving Allen, once the partner of Albert R. Broccoli, the co-founder of the 007 film franchise. Allen (dismissed as a “blowhard” by current Eon Productions co-boss Barbara Broccoli) had been skeptical of 007′s film potential and had insulted Ian Fleming.

Allen, presumably realizing the scope of his mistake, got the film rights to the Matt Helm series of paperback novels by Donald Hamilton. To make a Helm film series a reality, Allen needed a star. He got one — Dean Martin. But to get Dino into the fold, Allen made the Rat Packer a partner. For The Silencers, that meant a $1.2 million paycheck, more than twice the money Sean Connery got for doing Thunderball. To top it off, the Helm series found a home at Columbia Pictures. That was the same studio that passed on doing business with 007 producers Broccoli and Harry Saltzman, who ended up taking their project to United Artists.

The Scotsman didn’t like that and tensions accelerated between the star and 007 producers Broccoli and Saltzman. Perhaps Connery would have tired of the role anyway. But the conflict over money — fueled by The Silencers — caused Eon’s relationship with its star to rupture. Broccoli’s relationship with Saltzman was already getting tenuous and making Connery a partner in the enterprise wasn’t going to happen. Broccoli eventually would be proven right in one respect. Once Dean Martin lost interest, the Helm film series went away.

Still, had Allen not brought The Silencers (retooled from Hamilton’s serious novels to almost an extension of Dean Martin’s variety show) to the screen, much could have been different. Perhaps Connery would have stayed longer. Perhaps On Her Majesty’s Secret Service would have been a lot different with Connery, rather than George Lazenby. The point is, things got a lot bumpier for the franchise as The Silencers worsened tensions lurking beneath the surface.

Other films affected Bond films but The Silencers affected the business of Bond. The new Everything Or Nothing documentary references this in an indirect way. But in a way, the impact of The Silencers is part of Bond film history.

The power of Dino never ceases to amaze me! Good find DMP!

Hey pallie, likes Danny-o, you and me both man...and more and more the world is discoverin' the transformin' power of our most beloved Dino. Keeps lovin' our Dino!