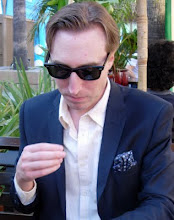 Hey pallies, likes today is 'nother great great day for our most beloved Dino, 'cause on this very day March 27, 2012 'nother of our great man's great sex farces is seein' the light of day on regular as well as Blue Ray DVD! After a huge huge wait pallies, today marks the day that the 1962 big screen caper "Who's Got The Action" is bein' released for our Dino-viewin' pleasure.

And, likes in honor of this new release, ilovedinomartin has found a 'nother great new-to-ilovedinomartin blog, "Dear Old Hollywood" where Hollywood media mogel Mr. Robby Crest hangs his hat. Cress' blog has the special mission of "Exploring Hollywood, Los Angeles, and the Valley, with a nostalgic look to the past, while still enjoying the present."

Likes very very cool to have such an outstandin' post on this new Dino-release to gets all us pallies in the mood to gets our hands on 'nother big screen Dino-effort.
ilovedinomartin sends our our deepest Dino-appreciato to Mr. Robby Cress for such a very timely and very creative bit of Dino-prose. To view this in it's original format, likes just clicks on the tag of this Dino-gram. Dino-delightedly, DMP 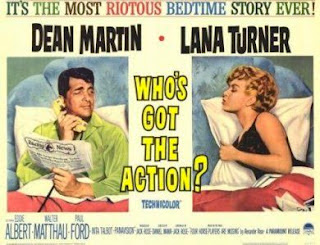 Dean Martin and Lana Turner headline this story about a man with a gambling addiction (Martin) and his wife (Turner) who does what she can to make sure her husband doesn't lose all of their money. The setup is quite a stretch. Turner has Martin's law partner (Eddie Albert) lead Martin to believe that Albert has found the best bookie in town, that bookie, being Martin's wife. The idea is if Martin loses then the money will stay in the household, but unfortunately, Martin goes on a winning streak, forcing Turner to sell their possessions to cover the winnings. Meanwhile, a real bookie in town (Walter Matthau ) is wondering who it is that is getting all the action?


Despite the tagline claiming to be "the most riotous bedtime story ever!" Who's Got the Action? (1962), really isn't that riotous at all. Even at an hour and a half the movie feels long. Most of the gags just are not that funny and the plot struggles to unfold. I think a more appropriate tagline would be "a mildly amusing bedtime story,"because the film does have some merits.

My favorite part of Who's Got the Action? is seeing Matthau in one of his early film roles. He's the most fun to watch and steals every scene he is in. I also liked the 1960s set designs, particularly the interior of the apartment where Martin and Turner live.

The apartment building where Martin and Turner live is the Talmadge apartments located at 3278 Wilshire Boulevard. This building was built by Joseph M. Schenck in 1922 for his wife, the silent screen actress, Norma Talmadge.

The Talmadge apartments as seen in the film. 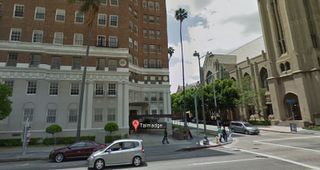 The Talmadge building as it appears today.


The screenshot below shows Martin and Turner leaving the Talmadge apartments and driving down Wilshire Boulevard. They're in the red car, passing Immanuel Presbyterian Church. 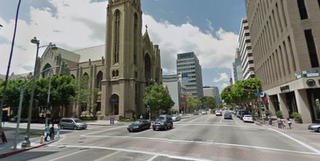 
Below is a side view of Immanuel Presbyterian Church looking across South Berendo Street from the Talmadge apartment building.

Martin about to enter the Talmadge building. Immanuel
Presbyterian Church is in the background. 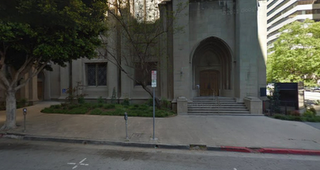 Side view of the church looking across S. Berendo St. 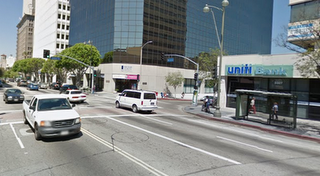 A glass and steel skyscraper now stands at
3333 Wilshire Boulevard.


Turner fainted when she saw the results of the races. Eddie Albert helps Turner back to her apartment. In the screenshot below we can see the Talmadage apartment building a couple blocks up in the background. The building in the foreground is a bank and that building is still being used as a bank today.

Eddie Albert helps Turner back to the Talmadge apartment. 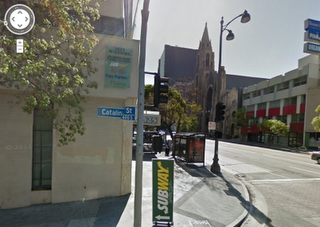 Looking up Wilshire at the corner of S. Catalina Street.


Who's Got the Action? is currently available as a Watch Instantly title on Netflix and will be released on DVD on March 27, 2012.
Posted by dino martin peters at 7:05 AM

Don't forget what else is special out today..it's Jeanne's birthday :)

Hey pallie, likes thanks ever so much for that Dino-detail...so Jeanne's b-day was just two days before the divorce between our Dino and wife 2 was finalized! Very, very Dino-interestin'. Keeps lovin' our Dino!