this film is all about who does Dean Martin’s character bed, who did he bed – and who won’t he bed"

Hey pallies, likes our search for deep, pure, and true Dino-devotion takes us this day to Deutschland where we meet classic film aficionado Miss Irene Palfy. Palfy shared a blog pad tagged "Let the Show begin" with our Dino-lovin' pallie Mr. Monty Hawes, and her most recent post likes puts the accent on most beloved Dino in that big screen classic from 1963, "Toys In The Attic."

Likes I recently grabbed my own copy of the DVD of Miss Lillian Hellman's broadway smash hit, but haven't had the op to view it (so much Dino, so little time to spend time with him)....but likes after readin' this stellar review, I am certainly gonna puts this Dino-flick on the top of my Dino-viewin' list!

Miss Irene does a credible job of lettin' us in on the plot of this flick, and her review includes some amazin' pixs...mostly of our Dino and other cast members. Likes I loves the pix of our great man amorin' with the great Yvette Mimieux. It's clear that our Dino really burns up the screen in this flick and likes Palfy states, "this film is all about who does Dean Martin’s character bed, who did he bed – and who won’t he bed."

It is always always likes so thrillin' to find 'nother lover of our Dino praisin' one of his lesser known works. So, likes kudos goes out to Miss Irene Palfry for bringin' this Dino-riffic flick to the attentinado of her blog readership. To view this in it's original format, likes just clicks on the tag of this Dino-message. Keeps lovin' and viewin' our Dino! Dino-amazed, DMP

Usually when one thinks of Gene Tierney - the films that come to one's mind might be those of her "career's peak" like e.g. LAURA (1944) and LEAVE HER TO HEAVEN (1945). Wonderful films indeed - but today I'd like to highlight a film of hers which features her in her second to last big movie (excluding some TV movies of course): 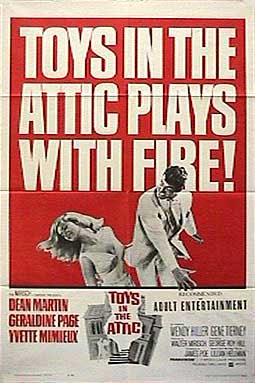 Julian Berniers (Dean Martin) isn’t very successful – in his live he lost a big amount of money. But now he is back to his home town New Orleans - visiting his two spinster sisters Carrie (Geraldine Page) and Anna (Wendy Hiller). With him he brings a lot of expensive presents - and his young and pretty wife Lily (Yvette Mimieux).

Lily's very rich mother, high society lady Albertine Prine (Gene Tierney), isn’t at all fond of Julian - but that’s not his biggest problem: Without the knowing of his wife and sisters he wants to help Charlotte Warkins (Nan Martin), an old flame of his who is married to a gangster (Larry Gates).

Lily is jealous – but even worse is Carrie – who is madly in love with her brother (in a way which is not very far from incest - but Julian is completely unware of that..) and she makes Lily call the husband of Charlotte.. 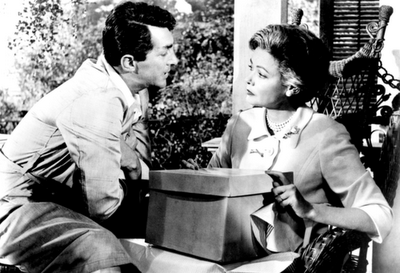 The film is based on the very successful play by Lillian Hellman. If you watch out you might spot in this film Joe Grey in a bar as an uncredited extra. He was a good friend of (and for a long time a double for) Dean Martin. They appeared together in about 16 films. Joe Grey also was a friend of Frank Sinatra - together they appeared in 10 of Sinatra's films. 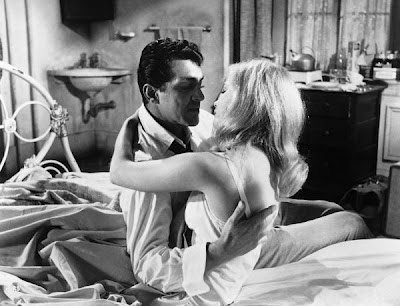 Though this film is all about who does Dean Martin’s character bed, who did he bed – and who won’t he bed: the best in this are the scenes of Wendy Hiller – of course I am a big fan of hers so not only maybe I am prejudiced in this aspect.. 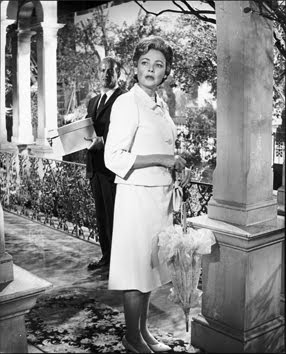 Gene Tierney is also really wonderful. She is perfect as an elderly society lady - still looking beautiful. She does her scenes in a very elegant - and partly a bit impish way.
I may step on some toes when I say that I think Yvette Mimieux looks at some moments more like she wa Dean Martin’s daughter than his wife – but I think this is one important aspect of the story: a more aged and by that maybe selfassured woman would have more trust into her husband (I guess.. I wasn't married to any men yet..) – and Miss Mimieux is doing her part quite well.

After all: the whole cast is really wonderful. 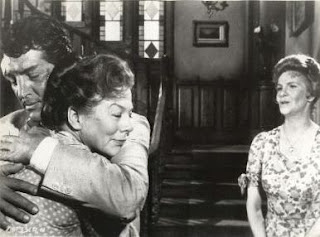 There is one scene which really is a but heavy: Charlotte’s face gets cut with a knife. Frankly: That is a really shocking scene - for those who are not fond of any kind of brutality in films - or trained by watching Horror films.. So please: If you are not easy with this kind of scenes – make sure to have someone in reach who can tell you that it’s over..

~ Geraldine Page and Dean Martin.
this is from an amazingly done scene - it's all in the looks.. ~

Besides that I really can recommend this film to everyone who likes a good drama.

Thank you very much for listening!

Irene
Posted by dino martin peters at 7:08 AM

This film of our Dino's is perhaps the film with the most profound themes: incest, miscegenation, town corruption, etc -- more Tennessee Williams than Lillian Hellman.

Although there is a tiny bit of humor in the film, there isn't much to laugh at or laugh about at all. Our Dino played this role appropriately: as straight as an arrow all the way.

In my view, every actor and actress in the film -- including our Dino, of course -- turned in outstanding performances.

First time i saw this movie, i didnt like it much, i wanted to see Matt Helm and Dinos westerns.
Now after seeing this 3 times i like this movie, maybe cos the first time i was just a boy.
Now i am getting older its a cool flick

Hey pallie, likes thanks so much Miss AOW for 'dem Dino-reflections...I can hardly wait to view this classic of classic Dino-flick. Keeps lovin' our Dino!

Hey pallie, likes Levi dude, likes how cool that you have seen "Toys" and likes I ain't...when I gets to watch this you and I are certainly goin' to have to do some patterin' 'bout it...you are such a huge Dino-holic Deanager Levi...very very cool dude! Keeps lovin' our Dino!