"Dean Martin Was the Least Appreciated Performer in Show business"

Hey pallies, likes the pallies at google 'lerted me to this great Dino-message this very mornin' and likes normally I woulda waits 'til at least Monday to shares it 'cause have 'ready posted our traditional St. Patty's Day Dino-trib, but likes I just can't wait to lets you all know 'bout this.

Yesterday was our most beloved Dino's partner in comedy, Mr. Jerry Lewis' 86th Birthday, and in the postin' below from Mr. Roger Friedman, scriber for the online presence of Forbes, the Friars Club honorin' Mr. Lewis on his big day. As part of the celebration Jerry was interviewed 'bout his life and times. When it came to speakin' 'bout our Dino, Mr. Lewis spoke in such lovin' tones 'bout his partner, and you can read those deep, pure, and true words of Dino-devotion below....they simply touch my Dino-heart to the max pallies.

And, as the tag of this Dino-prose notes, Mr. Lewis spoke the truest of true Dino-truths when he proclaimed, "Dean Martin Was the Least Appreciated Performer in Show business." That is such a sad not, but the great news is that is no longer true. Indeed devotion for our Dino grows daily, and more and more pallies of every age and stage are comin' to knowin' lovin' and honorin' our amazin' Dino!

Hats off to Mr. Jerry Lewis for sharin' the depths of his devotion to his ol' partner, and to Mr. Roger Friedman for scribin' this message for Forbes. To view this in it's original format, likes just clicks on the tag of this Dino-gram. Keeps lovin' our most beloved Dino! Dino-devotedly, DMP 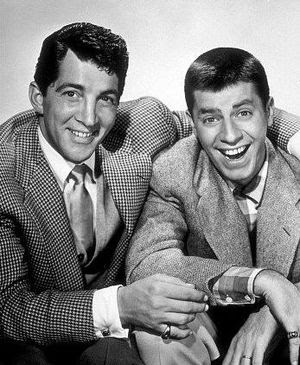 Jerry Lewis turned 86 yesterday and got quite a nice birthday party from the Friars Club. Richard Belzer interviewed him last night at the 92nd St. Y, Lewis did a lengthy and hilarious Q&A with the audience, and then Paul Shaffer played “Happy Birthday” to him on the piano with an audience singalong. Veteran comic and actor Jerry Stiller came and sat third row center and even asked a question: “Did you and Dean rehearse your act?”– and he seriously wanted an answer. Jerry joked a lot of his answers, and got lots of applause from an audience that included Robert Klein, David Steinberg, and writer-actor Robert Smigel (“Triumph the Comic Insult Dog”). The audience was full of showbiz people including producer Bonnie Timmermann, Rita Cosby, and director-producer Antonio Campos.

Lewis was brilliant, revelatory, and emotional–especially with a former MDA kid, now adult, who lives with Cerebral Palsy. When one audience member asked about Jerry getting fired from the MDA telethon, the comic was philosophical. (I’ll have more on that on Monday.) On the subject of former partner Dean Martin, Lewis said: “Dean Martin was without question the least appreciated performer in show business…For ten years my partner read reviews where his name wasn’t mentioned. And he dealt with it with such dignity and class…I called him Paul, his real name…I said, we have a magical combination. He said, I’m ok, Jerry. He was a great gentle man about it.

PS Belzer put together a stunning film of birthday greeting clips from everyone connected to “Law and Order” as well as Steve Martin, Robin Williams, Billy Crystal and Joe Piscopo, who was in the audience and also does a very cool Lewis imitation.

More to come including some exclusive pictures on Sunday…
Posted by dino martin peters at 7:56 AM

I just knew that, on the occasion of his 86th birthday celebration, Jerry would remember our Dino and say something wonderful about him!

Hey pallie, you and me both Danny-o...I just had to gets this posted as soon as Dino-possible. Keeps lovin' our Dino!

I love Jerry Lewis. He has always said that Dino was underappreciated. He said there has never been and never will be a straight man as talented as Dino. Happy Birthday, Jerry, and many, many more!

Hey pallie, likes Carol....Jerry's words of devotion are likes so so heartfelt! Keeps lovin' our Dino!