along with celebrities such as Dean Martin

Hey pallies, from the pages of the New Orlean's pad "nola.com", the on-line presence of "The Times-Picayune," from the pen of Mr. Brian R. Friedman comes a cool cool Dino-mention of one of the many and assundery golf courses that our Dino played, the Lakewood Golf Club in Algiers.

Mostly sharin' this Dino-gram with ya 'cause the pallies at "The Times-Picayune" have been so so wise likes as to share an outstandin' pix of our beloved Dino and golf legend Mr. Arnold Palmer playin' themselves a round of puttin' the little ball in the round hole at the Lakewood. Takes a good look at our great man's great stance as he watches the action of his ball. Likes don't thinks that I have ever seen this particular Dino-pix before...but likes so loves to see our beloved Dino in action!

Congratulations to the Lakewood Golf Club on celebratin' 50 years and many thanks to Mr. Brian R. Friedman and the pallies at "The Times-Picayune" for liftin' up the name of our Dino as part of the great celebration. To read the whole prose, likes just clicks on the tag of this Dino-message pallies! Dino-lovin', DMP

By Brian R. Friedman The Times-Picayune

During the ’70s and ’80s, the epicenter of golf in the region was Algiers’ Lakewood Country Club. All-time greats such as Jack Nicklaus, Arnold Palmer, Tom Watson, Lee Trevino and Seve Ballesteros — along with celebrities such as Dean Martin — are just a few of the big names to play Lakewood’s New Orleans Open, or one of its many charity tournaments. 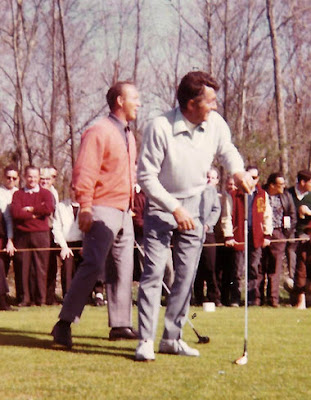 Photo courtesy Lakewood Golf Club Arnold Palmer and Dean Martin are two of the many stars who golfed at Lakewood Country Club.

At the time, Lakewood had “the finest condition golf course they could play,” said Deen Hart, longtime member and wife of former club pro Jim Hart. “They loved to come here because the fairways were like a carpet, they enjoyed the people and the food, and everything was so convenient.”

“It wasn’t just the golf course. Sometimes it’s because of the people and the food and the way that they’re treated,” Jim Hart said. “You ask any of the players now that are on the senior tour and every one of them played here, and this was one of their favorite stops............"
Posted by dino martin peters at 7:14 AM

Our Dino always looked right at home on a golf course.

Because our Dino loved to play golf, I took a college course in golf for one of my PE credits. I discovered that I, too, liked golf. But I wasn't very good at it.

Hey pallie, indeed Miss AOW, our Dino always looked right at home whatever he was doin'...but likes 'specially on the green....never have tried golf myself, although like you, would loves to in honor of our great man...unfortunately the game takes a bit of bread...and talent...which I am lackin' of likes both...keeps lovin' our Dino!